“We unequivocally support Joe Natale as CEO and support his management team,” Rogers said in a statement.

Rogers’ board last Thursday voted out Rogers, son of the late founder, Ted Rogers, after he tried to replace Natale with another executive. The move put him at odds with his sisters and mother, all of whom are fellow board directors and said they supported Natale.

The company also said no other individuals had the authority to act as the board of Rogers after the ousted chairman tried to reconstitute the board by removing the directors who acted against him and replace them with his own candidates.

IS claims responsibility for bomb attack in Uganda 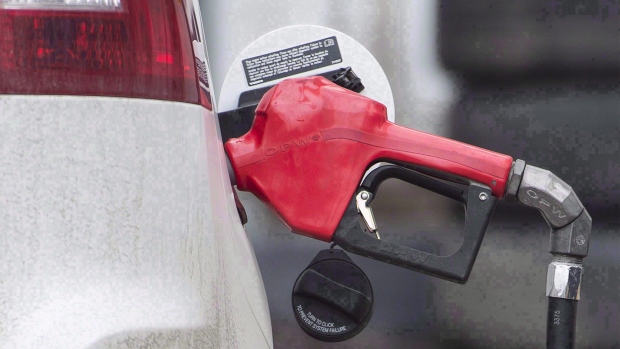 Oil prices suffered one of the largest ever one-day plunges, crashing more than 11 per cent on Black Friday as a new coronavirus strain sparked fears that renewed lockdowns will hurt global demand.

The crash, the 7th largest ever for Brent crude, the global oil benchmark, may prompt the OPEC+ cartel to re-consider its policy when it meets next week, with the group increasingly leaning toward pausing its output hikes.

The sell-off was amplified by low liquidity on a festive day in the U.S., the breach of several technical supports and Wall Street banks rushing to dump oil futures to protect themselves against positions in the options market.

The development apparently wrong-footed many in the oil market who had been comforted by low inventory levels and demand that had rebounded to 2019 levels, said Rebecca Babin, senior energy trader at CIBC Private Wealth Management.

“It was a lack of downside that had us continuing to think nothing bad could happen,” she said. “No one was thinking we could get a variant that we’re not familiar with and it could have meaningful impact.” 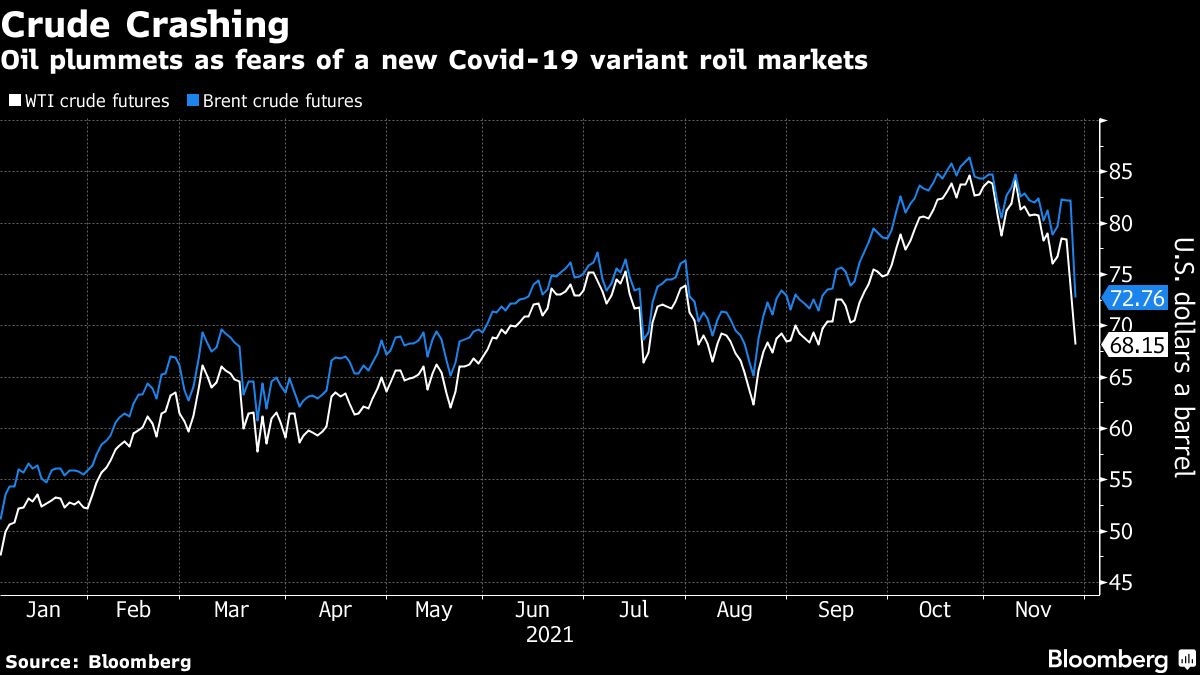 The price drop capped a dramatic week for the oil market, which started when U.S. President Joe Biden challenged OPEC+ by tapping the country’s strategic petroleum reserve in an effort to bring gasoline prices down. China, India, Japan and South Korea all joined the American effort.

Oil traders and analysts were divided about whether the flash crash was an excessive reaction to the COVID news. Damien Courvalin, oil analyst at Goldman Sachs in New York, called the drop an “excessive repricing” and ventured OPEC+ will respond pausing its production increases by three months.

High gasoline retail prices prompted U.S. President Joe Biden to seek ways to ease the pressure on consumers, leading to Tuesday’s announcement that the U.S. will release 50 million barrels of crude from the Strategic Petroleum Reserve, with China, Japan, India, South Korea and the U.K. also set to tap inventories. Still, oil rose on the day that the move was confirmed, suggesting traders had already priced in the new supply, or that they were underwhelmed by the supply response.

OPEC+ had warned previously it would reconsider a potential output increase if other nations went ahead with a reserve release. UBS Group AG said Friday that OPEC+ could choose to pause its current planned output hike of 400,000 barrels a day, or even cut production.

Friday’s oil selloff was likely exacerbated by a lack of trading activity during the U.S. holiday period, coming a day after Thanksgiving, and as the New York market closed early.

“It’s a sign the market got carried away from itself and that we still remain very vulnerable to COVID-19,” said John Kilduff, founding partner at Again Capital LLC.

Aside from the headline prices, crude traders also watched several other notable shifts in the market. WTI crude futures closed below its 200-day and 100-day moving averages, signs of technical weakness. The extreme pressure on the U.S. benchmark meant its discount to Brent expanded, reaching the widest since May 2020.

The picture wasn’t much brighter in oil-product markets, the part of the oil complex most directly affected by end-user demand. Diesel plunged, particularly in Asia, as the market began to price in a potential renewed hit to economic growth.

“This is a huge overreaction in terms of the market,” Amrita Sen, chief oil analyst at consultant Energy Aspects Ltd. said in a Bloomberg Television interview. “This is the market pricing in the worst possible scenarios.”

OTTAWA —
Shoppers rushed to the stores in Ottawa on Black Friday, hoping to get the best deals of the year heading into Christmas.

Some have even come from other countries for these sales like Elizabeth Elnakla, who is here from Scotland visiting her daughter Reem Almaqla.

Elnakla is what you might call, a Black Friday newbie.

“This is my first Black Friday. I’m super excited, it is so busy,” says Elnakla.

She’s looking to snag all the deals she can before she heads back home in three days.

“Shopping back home, I live in a small town called Dundee and it’s not very large,” says Elnakla. “So the shopping is never crazy. It’s quite quiet.”

Last year, many were stuck doing their Black Friday and Boxing Day shopping online. This year, back to the in-person busyness. 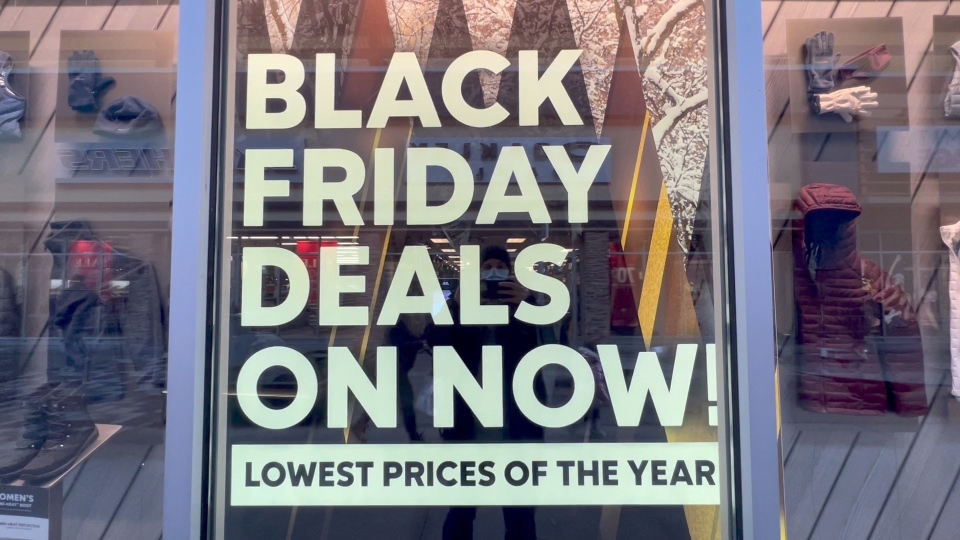 Tanger Outlets in Kanata was packed for Black Friday sales all week, but nothing like today.

“There’s nothing like a good sale, right? We all love the deal,” says shopper Josie Mousseau. “It’s just nice being outside in the fresh air. At least you get a little bit of an escape with your mask. You can take it off occasionally whereas when you’re confined to a mall, you really can’t.”

Monika Mehl describes the amazing deal she got on a Michael Kors purse.

Stores at Tanger opened at 7 a.m. Friday. Maria Argyriou left Montreal at 5 a.m. to make sure she got here on time.

“We went to all the sports stores and they’re all basically 50 per cent off,” says Argyriou.

Montreal is known for its shopping, but she wanted to try her luck in Ottawa.

“There’s a lot of people [in Montreal]. Here there’s less people, and we can get better deals,” says Argyriou.

With lineups at dozens of stores, shoppers stood in line for up to 30 minutes, braving the rain and cold to get deals only available once a year.

All day, bags of items flew off the shelves. And with supply chain issues this year, many of these shoppers know that once it’s gone, it’s gone.

“So you better get your shopping done honey,” laughs Mousseau.