Atlético Ottawa is selling branded facemasks in hopes of raising funds for the Ottawa Food Bank.

“As new members to the Ottawa community, it is important that while we wait to get on the pitch at TD Place that we do our part to support those in need,” said club CEO Fernando Lopez. “Supporting the Ottawa Food Bank with all the great work they do in the city to create a healthier city by empowering people, increasing access to healthy food, and advocating for systemic changes that reduce food insecurity is crucial during these times.”

The non-medical grade face coverings are available in adult size, and can be pre-ordered online. The masks, which cost $19.99 for a pair, are tentatively scheduled to ship in early June.

All net proceeds from the sales of the masks will help provide food to those in need throughout the region.

In the first five weeks of their COVID-19 response, the Ottawa Food Bank has been able to provide 665,450 lbs of food through their member agency network.

Google faces a $5 billion class-action lawsuit over claims that it has been collecting people’s browsing information without their knowledge even when using the incognito browsing mode that’s meant to keep their online activities private.

The lawsuit, filed in the federal court in San Jose, California, alleges that Google compiles user data through Google Analytics, Google Ad Manager and other applications and website plug-ins, including smartphone apps, regardless of whether users click on Google-supported ads, according to a report in Reuters.

Google uses this data to learn about private browsing habits of Chrome users, ranging from seemingly innocuous data that can be used for ad-targeting—such as information about hobbies, interests and favorite foods—to the “most intimate and potentially embarrassing things” that people may search for online, according to the complaint.

Google “cannot continue to engage in the covert and unauthorized data collection from virtually every American with a computer or phone,” the complaint said, according to the report.

The technology problem at the root of the report is a feature called incognito mode in the Chrome browser, which ironically is one that is supposed to protect people when surfing the internet. Chrome users can turn on incognito mode to protect their browsing history, sessions and cookies from websites that want to use this information for marketing or ad-targeting purposes. 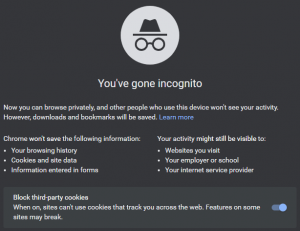 However, the feature has long had a problem in that even when using their mode, people’s activity has still been detectable by websites “for years” due to a FileSystem API implementation, Google Chrome developer Paul Irish tweeted last year.

Though Google said it implemented the FileSystem API in a different way in Chrome 76, released last year, the problem persists even in the latest version of Chrome 83, which was released last month, according to a report filed Thursday in ZDNet.

It is still possible to detect incognito mode in Chrome–as well as other Chromium-based browsers, such as Edge, Opera, Vivaldi, and Brave, which share the core of Chrome’s codebase, according to the report, which said Google still has not set a timeframe to fix the issue.

Developers even have taken the Chrome codebase scripts to expand the ability of websites to block incognito mode users from browsing, expanding it to other browsers that don’t use the same code base, including Firefox and Safari, the report said.

Ironically, the problem that’s put Google in legal hot water is nearly the same as the one the company accused browser rival Apple of having earlier this year in its Safari browser.

In January, Google researchers said they identified a number of security flaws in Safari’s private-browsing feature—called Intelligent Tracking Protection–that allow people’s browsing behavior to be tracked by third parties. Apple responded by saying it had already fixed the flaws in an update to Webkit technology in Safari.

Search-engine rival Duck Duck Go used news of the class-action suit as an opportunity to laud its own technology, which it offers as an alternative to Google search as a way to allow people to search and use the web privately.

DuckDuckGo is private. Will always be. https://t.co/bz5VmjurQW

“Incognito mode isn’t private. It never was.” the company said on Twitter. “DuckDuckGo is private. Will always be.”

“#Google #Surveillance & Advertising just got sued for $5 BILLION for lying about its bogus ‘incognito’ mode on its Chrome browser,” he tweeted. “As I’ve always said, you’re STILL being tracked when you’re in that mode.”

A federal judge said Apple Inc must face part of a lawsuit claiming it fraudulently concealed falling demand for iPhones, especially in China, leading to tens of billions of dollars in shareholder losses.

“Absent some natural disaster or other intervening reason, it is simply implausible that Cook would not have known that iPhone demand in China was falling mere days before cutting production lines,” Rogers wrote.

Apple did not immediately respond on Wednesday to requests for comment.

The complaint, led by the Employees’ Retirement System of the State of Rhode Island, came after Cook on Jan. 2, 2019 unexpectedly reduced Apple’s quarterly revenue forecast by up to $9 billion, in part because of U.S.-China trade tensions.

It was the first time since the iPhone’s 2007 launch that the Cupertino, California-based company had cut its revenue forecast. Apple stock fell 10% the next day, erasing $74 billion of market value.

Cook had said on the analyst call that the iPhone XS and XS Max had a “really great start,” and that while some emerging markets faced downward sales pressures “I would not put China in that category.”

By mid-November 2018, Apple had told the manufacturers Foxconn and Pagatron to halt plans for new iPhone production lines, and a key supplier had been told to materially reduce shipments, the complaint said.

The case is In re Apple Inc Securities Litigation, U.S. District Court, Northern District of California, No. 19-02033.

Stanley Cup Playoffs to be best-of-7 following Qualifying Round – NHL.com