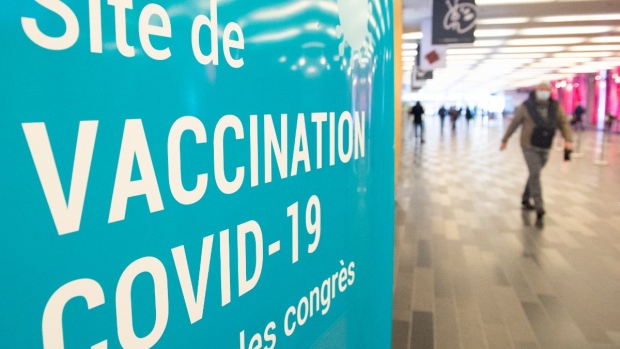 For the first time ever, Canada surpassed 20,000 new cases of COVID-19 on Thursday, setting yet another daily record.

Of the 20,699 cases reported on Thursday, the vast majority are in Ontario and Quebec.

It took 694 days from the first reported case of the novel coronavirus in Canada to reach 10,000 daily cases, a bar set on Dec. 19. It only took four days after that to reach 20,000 daily cases.

The figure, compiled by CTVNews.ca, is recent as of 7 p.m. EST. Northwest Territories have yet to report.

Cases have risen swiftly this month as more people spend time indoors and gather for the holidays, and as the new Omicron variant continues to spread. Provinces also have attempted to make vaccine booster shots and rapid tests more accessible over the holiday season.

Nearly all of the new cases reported Thursday are from Ontario and Quebec.

Ontario logged a record 5,790 new infections on Thursday, surpassing a previous high of 4,812 on April 16.

The province’s positivity rate rose to 16 per cent, the highest it’s ever been.

Although the gap has narrowed in recent weeks, a greater proportion of Ontarians who are unvaccinated are still contracting COVID-19 at a rate of 27.8 per 100,000 people, compared to those who are fully vaccinated at 25.71.

Currently, 81 per cent of Ontarians eligible for a COVID-19 vaccine are fully vaccinated. Unvaccinated residents also continue to be disproportionately admitted into intensive care. The province reported seven new deaths.

But the largest surge came in Quebec where 9,397 new cases were reported, a nearly 50 per cent increase over the previous record of 6,361 set just the day before. Six more people died in the province due to COVID-19.

Prince Edward Island also set a new daily high with 35 new infections on Thursday, while one new case was reported in Nunavut.

In Alberta, the provincial government reported 1,625 new infections from 11,800 tests, which translates to a positivity rate of 13.6 per cent. There were no deaths within the previous 24 hours.

There were 2,046 new cases reported in British Columbia as well as one new death.

With files from CTVNews.ca’s Tom Yun

The global job market will take longer to recover than previously thought, with unemployment set to remain above pre-COVID-19 levels until at least 2023 due to uncertainty about the pandemic’s course and duration, the International Labour Organization said in a report on Monday.

The U.N. agency estimates the equivalent of around 52 million fewer jobs in 2022 versus pre-COVID levels, which amounts to about double its previous estimate from June 2021.

Disruptions are set to continue into 2023 when there will still be around 27 million fewer jobs, it said, warning of a “slow and uncertain” recovery in its World Employment and Social Outlook report for 2022.

“The global labour market outlook has deteriorated since the ILO’s last projections; a return to pre-pandemic performance is likely to remain elusive for much of the world over the coming years,” the report said.

Director-General Guy Ryder told journalists that there were numerous factors behind its revision, saying the “primary one is the continuing pandemic and its variants, notably Omicron.”

The speed of recovery varies across regions, with the European and North American regions showing the most encouraging signs and Southeast Asia and South America lagging behind, according to the report.

Still, the projected deficit in working hours this year represents an improvement over the past two years. In 2021, the ILO estimates there were some 125 million fewer jobs than pre-pandemic levels and in 2020, 258 million fewer.

Overall, around 207 million people are estimated to be unemployed in 2022. However, the report said that the impact would be significantly greater since many people have left the labour force and have yet to return.

Among those are a high number of women https://www.reuters.com/markets/funds/gender-equality-takes-one-step-forward-three-back-during-covid-2021-12-02, often because they have been drawn into unpaid work at home such as teaching children during school closures or caring for sick family members.

The report predicted that the disproportionate impact of the pandemic on women’s employment would narrow in the coming years but that a “sizeable gap” would remain.

“There are some anecdotal indications that they are not coming back in the same numbers and in the same portions as men are doing which would lead to concerns that a ‘Long COVID’ effect on gender at work would be a negative one,” said Ryder.

Others who have left the workforce have done so voluntarily as part of a phenomenon some economists call “the great resignation”. Ryder said this appeared to be more prominent in areas of the economy such as health and care giving.

“We do need to look again and to invest further in those areas of economic activity,” he said.

January 2022/Toronto, ON — Rufus John, award-winning Black Caribbean-Canadian R&B/ Soul singer & songwriter is gearing up to release the single, Freedom Marching (Part I). The song will be available for pre-order on January 10th, 2022 and will be featured on the 3-song EP, The Freedom Marching Project, which is slated to be released on February 4th, 2022.

In support of the release of the EP, the project will also consist of; two official music videos, one in-studio performance video, a Call-To-Action Commercial, a Behind the Scenes Docuseries and a website that will feature resources and information for those who are willing to watch, listen and learn to then #JoinTheMarch.

The Freedom Marching Project founded by John, was inspired by the thousands of people who had the courage to use their voice to take action by marching through streets all over the world shouting, “Black Lives Matter!” in what is hailed as the most significant civil rights movement of our generation.  The goals of the Project are to use the creative power of Art, Education and Activism to; honor the community leaders who are fighting daily on the frontlines for equity, access, diversity, participation, and rights for Black, Indigenous, racialized communities, to shed light on the lived experiences of Black, Indigenous & Racialized communities and to provide resources and information to those who want to Stay Informed, Get Connected and Take Action.

John’s own music tells life stories of his past. A certified youth worker and mentor, John’s goal is to bring to the fore-front, deeply embedded issues experienced by the youth he helps and to inspire those who want to do more, to listen, to learn and join the movement.  John’s mandate has always been to not just connect but to engage.  John’s patience & commitment comes from his own experiences & mistakes and the people that helped him.   Walking alongside the youth he mentors is not only necessary for their journey but for his.  Being in for the long term is important.  Showing up is key.

The Freedom Marching Project has partnered with Community leader Selam Debs & the initiative Parents of Black Children. A Go Fund Me page has been set up where people can donate for the month of February and all the proceeds raised via Go Fund Me will be evenly distributed between The Freedom Marching Project and our partners who are combating racism, oppression and discrimination within the current systems and communities.

Connect with The Freedom Marching Project:

This past January 13th, The US Supreme Court issued two rulings blocking an Occupational Safety and Health Administrations COVID-19 Vaccine Mandate for employers who have 100 or more employees, while allowing a separate rule which applies to healthcare workers at facilities receiving federal funds.

The 6-3 decision blocked OSHA and other organizations from imposing any such rule. While the OSHA made every effort to enforce temporary emergency standards in its massive organization, it seems the influence and legal pressure applied by both Labor and Corporations to end this attempt to have 84 million workers get COVID-19 vaccinations was too much for the administration.

The Supreme court directed organizations and corporations with more than 100 employees to develop, implement and enforce a mandatory COVID-19 vaccination policy, with exceptions for employees that instead are required to undergo regular COVID-19 testing and wear a face mask at work.

While many corporations and manufacturers did enforce OSHA rules and carry out the needed mass vaccinations, the problem arose that such an organization such as OSHA had never issued such a mandate, and Congress had declined to enact any measure similar to OSHA’s. What do we have here folks? A governmental organization trying to carry out what the Biden Administration has asked to be done in America. The vaccines are available, but a large portion of America remains unvaccinated.

Instead of issuing a Presidential Executive Order declaring an emergency, the Administration has directed a few organizations to do so that they can wait and see if such a mandate will be accepted and approved by the population, labor, and business sectors. Perhaps it is the way this is being done that is the problem for The Supreme court, or the Republican friendly conservative of the court simply outnumber the liberal members. Politics as usual. Ineffectual, unworkable politics where no matter the issue, the Republicans will block any Democratic Administration’s attempt to protect America.

A nation divided, even when the lives of many are at stake. American media makes the storming of the Capital on Jan 6th seem like an emergency, an insurrection of serious substance while the Republicans on the Capital, block in every way possible any attempt to save lives through public safety and health mandates. Remember how the Republican strategy to make Obama Administration seem ineffectual by blocking all legislative efforts? The same Republicans are repeating this strategy with the Biden Administration. A sports analogy whereby one blocks constantly until your opponent makes a mistake and fumbles. While the lives of millions are threatened by COVID-19 these Republicans play games with the nation. Americans are feeling stressed, hopeless, and fearful of their future and yet their elected officials cannot work together to accomplish anything, except perhaps giving themselves a wage increase. Have those on Capital Hill forgotten who they represent?

OnePlus 10 Pro and OnePlus Nord 2 CE release dates posed a month apart from each other – Notebookcheck.net