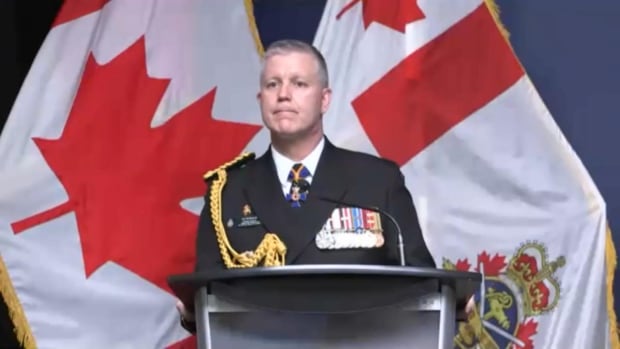 Admiral Art McDonald abruptly stepped aside late Wednesday night as Canada’s top military commander after questions were posed to the Department of National Defence about a sexual misconduct investigation into allegations against him.

Those allegations, CBC News has learned, involve a female crew member and an incident a decade ago aboard a warship that was participating in a northern exercise.

Several media outlets were tipped off that an investigation by the Canadian Forces National Investigation Service was underway and had been for some time.

CBC News asked for comment late Wednesday and received no response until 11 p.m., when Defence Minister Harjit Sajjan released a statement announcing that McDonald — who took over the chief of the defence staff post just a month ago — had stepped aside voluntarily while the investigation is ongoing.

The minister did not reveal the nature of the allegations against McDonald and said he will not comment further because the investigation is ongoing.

Allegation dates back to 2010

However, sources with knowledge of the investigation spoke to CBC News and say the allegation of misconduct dates back to 2010 and involves an incident aboard HMCS Montreal, which at the time was involved in the military’s annual Arctic exercise known as Operation Nanook.

The allegation against McDonald, who was a naval captain at the time, involves a female junior officer and took place during a party that involved alcohol.

The investigation comes on the heels of another, separate case involving the man McDonald replaced.

Military police are investigating allegations that the former chief of the defence staff, Gen. Jonathan Vance, had a long-standing inappropriate relationship with a female subordinate and separately sent a racy email to another woman, also of lower rank.

The allegations against Vance led to a parliamentary inquiry into when the Liberal government became aware of the claims and what sort of action it took to verify them.

Investigation began a month ago

In his speech during his swearing-in ceremony, McDonald apologized to victims of racism and misconduct in the military.

He later told reporters that he felt it was necessary to make the apology because he was certain that he had unintentionally been part of some of the problems that the military is now trying to address.

He did not cite a specific incident in his past in those remarks on Jan. 14, but suggested that “when challenged by some of the circumstances, I thought maybe I didn’t hear a voice.”

Sources tell CBC News the investigation into the 2010 incident involving McDonald began a month ago, around the time the new chief was sworn in.

Several witnesses and the alleged victim have been interviewed, the source said.

Both the defence department and Sajjan’s office have refused all further comment.

Sajjan has appointed Lt.-Gen. Wayne Eyre as acting chief of the defence staff. Eyre currently is the commander of the army.