OTTAWA — Canada Mortgage and Housing Corp. expects a drop in home prices in the country’s biggest cities amid “severe declines” in home sales and construction.

The federal housing agency says a combination of factors related to the pandemic, such as higher unemployment and lower income, will slow housing starts and push sales and home prices below pre-COVID levels.

CMHC says the market likely won’t see a return to pre-pandemic levels before the end of 2022.

Average home prices in Toronto, Montreal and Ottawa are expected to rebound sooner, starting in late 2020 and rolling into early 2021.

Prices in Vancouver, Edmonton and Calgary likely won’t rebound until later in the forecast period, it added.

Calgary and Edmonton will see average home prices decline, it said, due to uncertainty around oil prices and economic recovery in the region.

CMHC deputy chief economist Aled ab Iorwerth says COVID had “unprecedented impacts” on the country’s urban centres, and could lead to “severe declines in sales activity and in new construction.”

Greater cultural shifts may also affect the housing market, he said, and many of those developments are so recent that they’re hard to fully comprehend or quantify.

“We do not yet have a grasp on the answers to questions, such as the impact of greater work from home, differing impacts across industries, the effect of less mobility across provincial boundaries and the decline and immigration following cutbacks and international aviation,” he said.

There are also substantial questions about how rental markets will be impacted.

He noted that a decline in immigration and interprovincial activity will lower demand for rental units, which combined with a “significant new supply in rental properties close to being completed,” could mean that vacancy rates are likely to jump.

“Such increases in vacancy rates, however, will be from historically low levels in Toronto and Vancouver, in particular,” he noted. 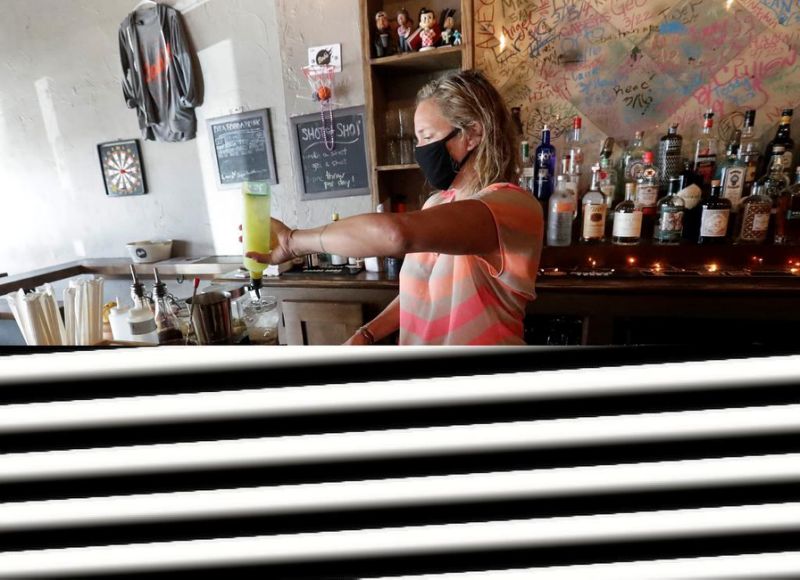 That was just before the coronavirus struck suddenly, forcing them to close. But in May, as authorities eased safety and social-distancing rules, Hungry Pants reopened at smaller capacity, fueled by hope, hand sanitizer and a government loan.

Now, a spike in confirmed viral cases is making Conicella and Marin anxious about the future — for their business and for the region — even as they keep their restaurant open.

For residents across America’s Sun Belt — business owners and workers, consumers and home buyers — the past three months have delivered about the scariest ride in memory. With confirmed viral cases surging through the region, it’s far from clear whether the stops, starts and bumps in the economy have ended. Or are they the new normal? Will the Sun Belt remain gripped by doubt and uncertainty for months or years?

What is clear is that no one feels able to relax and assume the best.

Judge had thought the worst was over after she had managed to reopen in May and her loan from the government’s Paycheck Protection Program had gone through. Now, her business is stalling once again as reported viral infections have accelerated. Again, she’s worried.

“I didn’t fathom that a whole country could stay shut down and affect people’s businesses and people’s livelihoods for the duration of time that it has,” Judge said.

That unease stems from a disturbing truth about the pandemic: No one, not even the top experts, can say when a vaccine or an effective treatment might be in sight.

“We don’t know when this Covid-19 is going to end,” said Aakash Patel of Tampa, who runs Elevate, a consulting firm involved in public relations and marketing for businesses.

“We all fell together,” he said. “We’re all going to rise together.”

It isn’t just business owners in the region who fear for the future. It’s consumers, too.

In Scottsdale, Arizona, Jim and Bobbi Moss had been banking on what looked like a promising economic rebound, only to lose some hope and retreat into a strict limit on their discretionary spending. They now make all their meals at home, and online shopping, Bobbi Moss said, is limited to items that “sustain daily living.”

“We’re not spending online, saying, ‘Gee, it might be nice to have this or do that,’ “she said. “We’re not doing any of that.”

The couple, who run a tax consulting and financial services business, say many of their clients — from couples in their 30s to retirees in their 80s — feel whip-lashed by an economic stall-out after the brief rebound a few weeks ago. Clients are rethinking investments, Jim Moss said, or delaying home purchases. Some are considering reverse mortgages because they worry about their cash flow.

In Arizona, Gov. Doug Ducey has ordered bars, nightclubs and water parks to close again for at least a month. Those businesses had been allowed to reopen when a previous stay-at-home order expired in mid-May.

In Texas, too, Gov. Greg Abbott in May had green-lighted one of the country’s earliest and most aggressive re-openings. But by the end of June, the state’s daily rates of newly confirmed cases and hospitalizations had quadrupled.

So last week, the governor reversed course. He shuttered bars, restricting restaurant dining and barred elective surgeries in eight counties. On Thursday, he went further: He issued a mandatory face-mask order for most of the state.

Florida officials have also shut down bars for a second time. Yet the state’s approach has been defined by a patchwork of varying rules, with officials in South Florida, where viral cases have spiked, being the most stringent. In Central Florida, by contrast, some theme parks have reopened. Disney’s Magic Kingdom and Animal Kingdom are set to reopen July 11, Epcot and Hollywood Studios four days later.

Danielle Savin has been a personal witness to the wildly uneven ways in which states have responded to the virus.

Savin owns two bars — one in New York, one in Miami — that were forced to close for months. When the pandemic first hit and New York was the country’s epicenter, she feared most for her business there. No longer. Now, it’s the Miami location she worries most about. She’s required to close it at midnight because confirmed cases in Florida have soared.

“Being in Florida right now with COVID is like trying to play Pin the Tail on the Donkey at a 5-year-old’s birthday,” said Savin, co-owner of Bob’s Your Uncle, a bar with a neighbourhood vibe that had been open a year when the virus struck.

The business model had to be swiftly changed, with more focus on food, more kitchen staff and a staggering of shifts to comply with restrictions. Sales have declined, though. Savin and her co-owner have been working with their landlord to help with rent payments. Still, she started a GoFundMe page that has raised about $3,000 to help struggling employees.

“It did feel when we reopened again that we had to open a restaurant from scratch,” she said.

It is a sentiment felt, too, by Joe Ables, who owns Saxon Pub, a live-music venue in Austin, Texas. Ables had closed his doors in March. He didn’t reopen even when Texas allowed it at up to 50 per cent customer capacity.

He sought and received federal aid to support his six full-time employees. But given that Texas has now shuttered its bars twice, he’s settling in for what he fears will be a long dark period for businesses like his. Ables thinks the state will be cautious and likely slow about reopening them again.

In Austin, which bills itself as the “Live Music Capital of the World,” Ables has watched some clubs close for good and musicians and production workers leave the city. The state’s second shutdown of bars could inflict further damage.

“I’m worried about the club scene,” he said. “There is permanent damage.”

Even so, Ables said he holds out hope for an eventual rebound, perhaps in 2021.

“I think we all have to believe,” he said, “regardless of whether it’s war or famine, that we’re going to come through it.” ___ 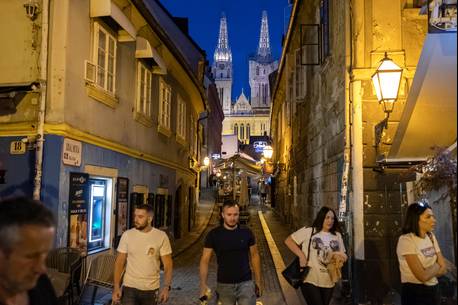 ZAGREB (Reuters) – Croatia held an election on Sunday at a time of rising coronavirus infections and a sharp economic downturn from the pandemic, with the outcome likely to lead to political negotiations to form a new government.

The ruling centre-right Croatian Democratic Union (HDZ) has had a slight advantage in most opinion polls over its main rival, the Social Democrats (SDP), but neither party is seen being able to govern on its own.

“At these challenging times both for public health and the economy Croatia deserves to be led by experienced and responsible people,” Prime Minister and HDZ leader Andrej Plenkovic told supporters this week, hinting at his two top opponents’ lack of vision and experience.

They are SDP leader Davor Bernardic and popular singer Miroslav Skoro, whose nationalist and eurosceptic Domovinski Pokret (Homeland Movement) has fared third in the opinion polls with just above 10% support, compared with close to 30% for the two top parties.

Polling stations opened at 0500 GMT and will close at 1700 GMT when the exit polls will be released. The first preliminary official results are expected around two hours later.

“My choice is Skoro as I believe his party wants stability and to stop the young people from moving to seek jobs abroad,” said Ilija Grlic, a voter from the Zagreb area.

The new government will have an uphill task to keep a grip on the coronavirus while trying to restore the economy, expected to shrink some 10% this year. Tourism revenues are forecast to slump 70%.

“I think that the SDP could be a relative winner, but that the HDZ could be the one to eventually form a (coalition) cabinet,” said Kristijan, a teacher, before casting a ballot.

Some analysts believe that the two biggest parties may be forced to join forces, as the alternative of trying to form a stable government with junior partners, such as Skoro’s Homeland or the conservative Most (Bridge) party, may prove difficult.

Both Plenkovic and Bernardic have firmly rejected the idea of a “grand coalition”.

Croatia has reported a relatively small number of coronavirus infections — 3,000 COVID-19 cases and around 100 deaths recorded so far — but infections have accelerated in the past two weeks, with the daily number of new cases currently peaking at around 80.

“I am sure that the downturn of our economy can be stopped after the summer break and that from October onwards, the economy can start growing again in Germany,” he told the mass circulation Bild am Sonntag in an interview.

His goal was to reach the level that employment was at before the crisis by 2022, and to start heading for regaining full employment after that date, he said.

Altmaier also said that the rate of the spread of the virus in the United Status was a major concern.

“A pandemic that gets out of control there, has big consequences for the world economy,” he said.