Is there an art to consuming art? – The Varsity  Varsity SPECIAL TO THE NEWS

A new art exhibit is opening at the Rollin Art Centre, featuring a group of four local female artists.

Sue Thomas, Jillian Mayne, Colleen Clancy and Ann McIvor will display their artwork in an exhibit titled “Women’s Work” that opens on June 21 and runs until July 22. The diversity of the work reflects each woman’s unique creative process and artistic expression.

Join us in the gallery this Saturday, June 25 from 1-3 p.m. for refreshments and an opportunity to meet these incredible and accomplished artists.

The Rollin Art Centre will be holding a summer-inspired art exhibit from July 27 to Aug. 26 and we are inviting all local artists to submit up to three pieces (size depending) that depicts your own rendition of the season of summer.

All mediums are welcome. Application forms are available at the Rollin Art Centre. The fee is $10 per submission. Deadline for submissions is July 15.

Join us on the terrace at the Rollin Art Centre on Saturday, July 16 for an acrylic painting workshop with Susan Schaefer. Bring a friend and be creative!

From 10 a.m. to 3 p.m., Susan will guide you through what makes a good composition while simplifying your landscape.

This summer, the Community Arts Council will be raffling a chair designed by Leave Her Wild Container Design. The chair has been planted and is on display at the Rollin Art Centre (corner of Eighth Avenue and Argyle Street). Tickets are $2 each or three for $5.

Teas on the Terrace are back at the Rollin Art Centre this summer and tickets are now on sale.

Choose from our high tea (served on a two-tiered plate) for $25 and our strawberry tea (served with decadent strawberry shortcake) for $20 and join us on the terrace under the canopy of the trees, sipping tea, listening to local musicians and sampling a selection of snacks.

Here’s a chance to have your kids do something creative and fun and make new friends this summer. The Rollin Art Centre is offering eight weeks of creative summer art programs for children between the ages of 7 -13.

Each week features a different medium. From drawing to painting, we have something everyone will enjoy.

Celtic Chaos will perform a maintee at the Capitol Theatre this fall as a fundraiser for the Rollin Art Centre.

“For the Highlander” is a brand-new performance by Celtic Chaos which tells their story in original narrative, poetry, song and music. Join us for this high-energy, fun-loving group of musicians and help support art in the community.

The concert takes place Sunday, Nov. 6 at 2 p.m. at the Capitol Theatre. Tickets are $25 each and are available now at the Rollin Art Centre.

The Sunshine Club will be holding a pottery sale at the Harbour Quay on Saturday, June 25 from 9 a.m. to noon.

July and August – Teas on the Terrace – Tickets available now

Melissa Martin is the Arts Administrator for the Community Arts Council, at the Rollin Art Centre and writes for the Alberni Valley News. Call 250-724-3412. Email: communityarts@shawcable.com.

Yukon arts scene 'so ahead' of the N.W.T., say arts advocates and artists – CBC.ca

Just a couple days ahead of the Arctic Arts Summit in Whitehorse, the Yukon arts scene seems to be thriving.

But it’s not quite the case in the N.W.T., say arts advocates and artists, and some say it’s largely due to insufficient support from the Northwest Territories government.

This week, the Canada Council for the Arts is visiting two N.W.T. communities, where board members can hear from local artists.

Ahead of the first meeting Thursday night, local artist Sarah Swan said she is impressed by the amount of commitment that the Yukon government has put into its artists.

“The Yukon is just so ahead of us because the government started taking art seriously like 30, 40 years ago,” she said. “At that time, they made a plan to build really dynamic and exciting infrastructure.”

She said the Arctic Arts Summit being held in Whitehorse is “amazing” and that she hopes one day the event will come to the N.W.T.

“But I’m pretty doubtful that it could, just because we don’t have the infrastructure to pull it off yet.”

Swan helps run a Yellowknife-based mobile art gallery, operated by volunteers. She said that it’s the only non-commercial art gallery in the N.W.T. and it’s “not even a real gallery,” she said, “[it’s] just a trailer.”

N.W.T. fashion designer found success after moving to the Yukon

Robyn McLeod, a fashion designer, left the N.W.T. to live in the Yukon over four years ago. After moving, she said she experienced more career opportunities. Just last month, her work was featured at the Indigenous Fashion Arts Festival in Toronto.

McLeod said she tried making purses, earrings, and other accessories while living in the N.W.T., but she was unable to develop a real business plan.

“I tried to get help to do work with it, and just access programming there. And it was hard. So it felt really, really difficult to be an artist there [in the N.W.T.].”

It was also harder to get people interested in her work. “If you make art in the N.W.T. and try to bring it to a place that sells artwork, they turn a lot of people away,” she said.

McLeod said she found the Yukon’s funding application process easier to navigate, was able to access grant money that specifically supports Indigenous artists, and has become more respected as an artist in the Yukon.

“I found that it feels easier here [in the Yukon] to be able to sell your work in different shops. People want your work and are asking for it,” said McLeod.

Yet according to numbers provided by government representatives, the Yukon gave out close to three times more funding in arts council grants than the N.W.T. during the 2021 to 2022 fiscal year.

In an email, Erin Moore, senior communication adviser for the N.W.T’s Department of Education, Culture and Employment, told CBC News that N.W.T. Arts Council Grants are budgeted at $700,000 per year and the full amount was distributed for the 2021 to 2022 fiscal year.

Meanwhile, Cameron Webber, communications analyst for the Yukon’s Department of Tourism and Culture, provided a chart in an email to CBC showing that the Yukon had provided a total of $1,917,040 in Arts Council Grants for the same fiscal year. Specifically, $333,156 went to individuals, $93,455 went to artist collectives and $1,490,429 went to arts organizations.

Webber said there are currently seven non-profit and artist-operated galleries in the Yukon.

“Additionally, many cultural centres, museums, and other multipurpose public venues have dedicated exhibition spaces,” he wrote.

Aside from territorial government support, there’s also a significant difference in the amount of funding that the territories received from the Canada Council for the Arts, the federal sponsor for artists and arts organizations.

Nunavut – with a population under 40,000 – received only 22 applications. Yet the territory was still awarded a total of $2,117,997 in Canada Council funding.

Jesse Wente, the chair of the Canada Council for the Arts, said “fewer applicants” from the N.W.T. isn’t “representative of the amount of actual artistic creation that occurs in the region.”

‘I want to hear from folks in the Northwest Territories’

The Canada Council is also co-hosting the Arctic Arts Summit alongside the Yukon government. Wente described both the gatherings and the summit as major initiatives that the council has been working on for the past couple of years.

“This is certainly the first time we’ve done anything like this [gathering] in my time on the board,” he said.

The council is in Yellowknife Thursday night and in Inuvik Friday, where they hope to hear directly from N.W.T. artists.

“The council is in the process of developing a strategy to help artists in the North,” said Wente.

“That’s a commitment the council made some years ago. This [gathering] is part of that and really looking at how to better serve artists in northern communities.”

Wente said that northern artists often face challenges around infrastructure and accessibility, but that it was too soon to talk about specific needs.

“I’m probably not the person to say what the Northwest Territories needs,” said Wente, who is from Toronto.

“I want to hear from folks in the Northwest Territories, what they think they need, and then figure out how to support that.” 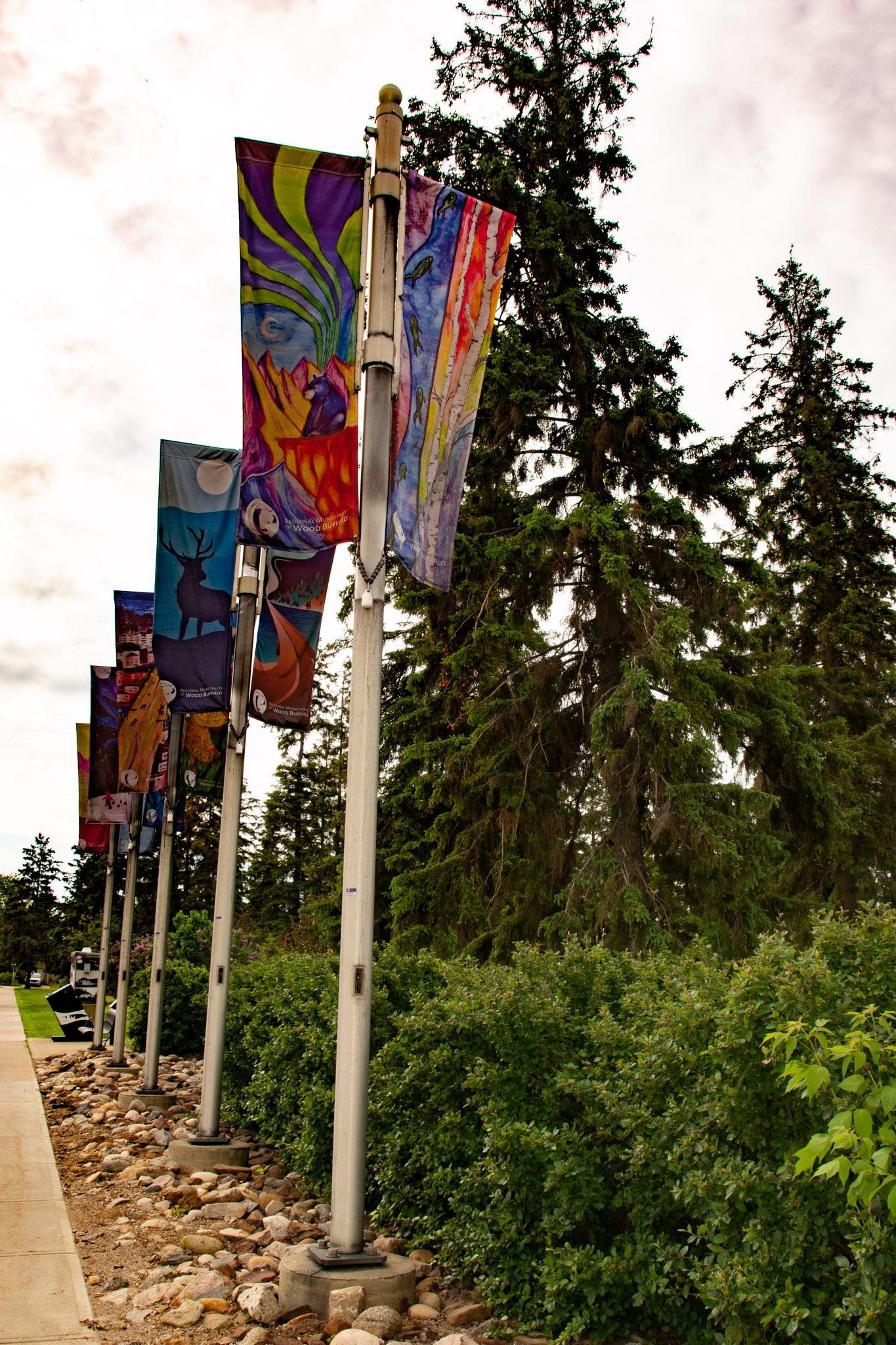 Calling all Fort McMurray Wood Buffalo artists and creative individuals of all ages and skill levels! The 2022 Street Banner program is open and accepting artwork submissions until July 29.

Artwork will be selected by a panel of community organizations and the designs will be displayed on street banners throughout the Region from fall 2022 to spring 2023. Selected design recipients will receive a $500 artist design fee and a screened banner.

Share a design that captures our Northern Spirit and showcases the dynamic cultural fabric of the region. Wood Buffalo has strong global connections, and vibrant culture that supports a diverse region rich in history.

Our Northern Spirit is dynamic and adds to the cultural diversity of languages, traditions, celebrations, sports, activities, and landscapes that can be found here in Fort McMurray Wood Buffalo.

This theme can recognize the coming together of community through a number of events which include but are not limited to the Arctic Winter Games and the International Decade of Indigenous Languages.

Art paper needed to complete your submission can be picked up at the Culture and Social Development branch located on the fourth floor of the Jubilee Building (9909 Franklin Avenue). Completed banner submissions can also be returned to this location.

Rural artists can contact their local Municipal Offices on weekdays between the hours of 9 a.m. and 4:30 p.m. to pick up art paper and drop off completed submissions.

Submissions should also be accompanied by the completed Artist Information, Waiver and Photo Release forms.