The Winnipeg Jets have placed forward Pierre-Luc Dubois on injured reserve due to a lower-body injury, the team announced Wednesday.

The move is retroactive, as Sportsnet‘s Ken Wiebe points out, and does not rule Dubois out from returning for Winnipeg’s game at the Vancouver Canucks on Friday.

Dubois has missed the Jets’ last two games after “something tightened up on him” during practice last Friday. The 22-year-old has been held pointless while averaging 15:18 of ice time in the pair of contests since joining Winnipeg last month in a blockbuster trade with the Columbus Blue Jackets.

By the Numbers: McDavid’s road to the cusp of 500 career points – TSN

Bergevin: 'It was the best decision to make' – NHL.com 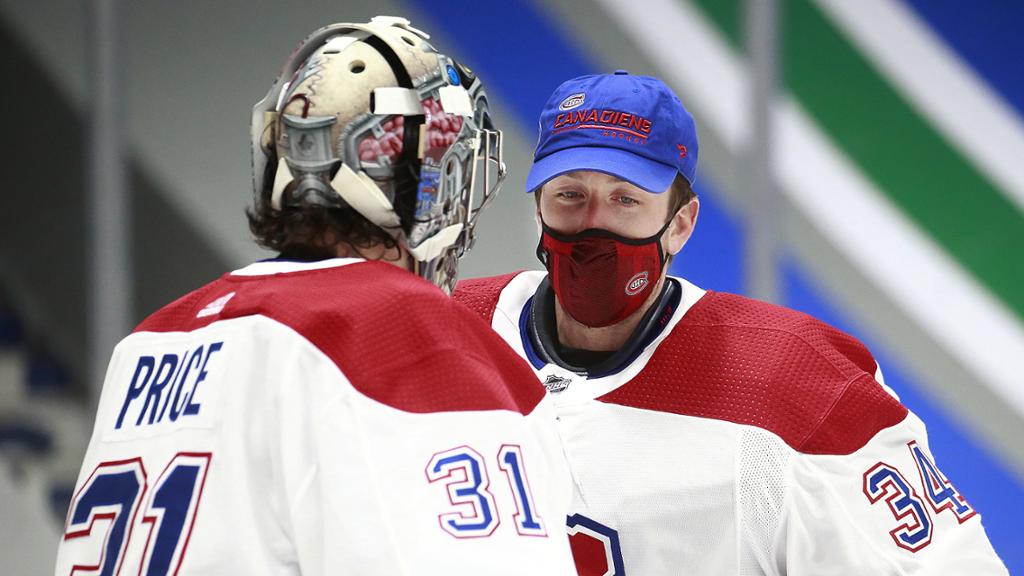 BROSSARD – General manager Marc Bergevin clarified the reasons why Stéphane Waite was relieved of his duties as the Canadiens’ goaltending coach on Tuesday night.

Waite had been working alongside Carey Price since the 2013 campaign. It was under his mentorship that Price won the Vezina Trophy, Hart Trophy and Ted Lindsay Award after his standout 2014-15 season. The former fifth-overall selection in 2005 posted a 44-16-6 record, along with a 1.96 goals-against average, a .933 save percentage and nine shutouts.

Nevertheless, Price has struggled this season, compiling a 6-4-3 record, 2.96 goals-against average and a .893 save percentage in 13 outings.

A change was needed, according to Bergevin.

“It’s not an easy decision. I made the change at this point because I wanted to be 100 percent sure. Firstly, I’d like to thank Stéphane for his service to the organization. It wasn’t an easy decision, but it was very important,” mentioned Bergevin, during Wednesday’s press conference at the Bell Sports Complex. “I gave this decision a lot of thought. It isn’t based on this season only. I’ve also seen a pattern over the last few years. As the general manager, my responsibility is to bring the players here. My responsibility is also to make the best tools available to our players so they can have success. I think it was the best decision to make. We’re bringing in someone with a lot of experience and credibility. It wasn’t a change just to make a change.”

Bergevin told Waite the news during the second intermission of the game against the Ottawa Senators so it wouldn’t be a distraction for the team.

During Wednesday’s Zoom call with reporters, he explained the process behind the decision and confirmed that Price didn’t play a role in Waite’s dismissal.

The Habs’ starter actually found out about the move like the rest of his teammates following the 3-1 victory.

“As a general manager, the day that I decide to consult a player to find out what I should do is the day that this won’t work anymore. I made a decision based on the tools I need to provide to Carey and Jake. I’m never going to consult my players,” explained Bergevin. “Carey learned of the move after the game. I never communicated with Carey to ask his opinion. The day that I start operating that way, I won’t be the good guy anymore. That’s my role as the general manager of the Montreal Canadiens.”

A man of few words, Price’s reaction wasn’t shocking at all. He took the information in stride and supported the switch.

“It was a typical reaction from Carey. He told me that he understood. He’s a proud athlete. He wants to perform at the top of his game. He knows that he has to improve and fix some things,” stressed Bergevin. “He understands that it was my decision and he supports it. It’s nothing against Stéphane. We’ll see what happens.”

Bergevin also revealed why Sean Burke is taking the reigns from Waite and assuming the role of director of goaltending.

Burke has been a professional scout for the Canadiens since 2016. Before joining the organization, the 54-year-old served as the Coyotes’ goaltending coach from 2009 to 2015.

It’s safe to say that Burke has quite a resume.

“Sean did very good work in Arizona. He has experience and he played the position. He’s capable of putting himself in a goaltender’s shoes. He knows what it’s like to have ups and downs. I based my decision on that,” affirmed Bergevin. “There’s definitely a mental aspect to goaltending. I think that Sean, with his goaltending experience, has been through a lot. He did good work in Arizona with Mike Smith, Devan Dubnyk and Ilya Bryzgalov. He has first-hand knowledge and expertise.”

Tweet from @CanadiensMTL: The Canadiens have relieved St��phane Waite of his duties and have appointed Sean Burke as director of goaltending.https://t.co/hOXX0Jx5rK

The Canadiens’ GM gave Price a vote of confidence as well.

“I still believe that Carey is an excellent goaltender. He’s one of the best in the NHL,” concluded Bergevin. “He needs help. I think an experienced guy like Sean will do that.”

Along with the five players – Fred VanVleet, Pascal Siakam, OG Anunoby, Malachi Flynn and Patrick McCaw – head coach Nick Nurse, who went into protocol with five members of his staff last week, is also out for this game against Detroit.

The Raptors have been cleared to return to the floor and face the Detroit Pistons on Wednesday – a game that was originally slated for Tuesday and tentatively postponed pending additional test results.

With multiple days of no new cases, the team was able to step on the floor on Tuesday to prepare for Wednesday.

“It’s been a tough couple of days,” general manager Bobby Webster said. “To get to here and be able to practice, we had to clear a number of hurdles.”

Feels good to be back together on the court tonight. #WeTheNorth pic.twitter.com/GFkmNt3c1x

However, the team will be severely shorthanded, as they have five players ruled out due to health and safety protocols, including starters Fred VanVleet, Pascal Siakam and OG Anunoby. Malachi Flynn and Patrick McCaw are also out.

The five players will be out against the Pistons along with head coach Nick Nurse, who entered the protocols with five other members of his staff last week.

The team hasn’t played a game since Friday when they defeated the Houston Rockets while being led by assistant coach Sergio Scariolo, behind Kyle Lowry‘s triple-double.

Triple-double for @Klow7 to lift the @Raptors!

The Raptors will look forward to taking care of business against the Pistons before hosting the Celtics 24 hours later in the team’s final games before the All-Star break.

Given the short turnaround between these next two games, it seems unlikely that the five players ruled out will be able to suit up against Boston.

The views on this page do not necessarily reflect the views of the NBA or its clubs.​

When you’re in the middle of a five-game losing streak, just fired the head coach and associate coach (then, oddly, the goaltending coach), you need a win of any kind to right a careening ship. It looked like the Montreal Canadiens might win on Saturday, but a poor overtime decision washed that away. On Tuesday Montreal got the victory. It wasn’t pretty, but it’s a win.

It was dominant in terms of possession metrics, where Montreal doubled up Ottawa’s scoring chances at five-on-five en route to the 3-1 victory. What stood out the most is that even with a lead, or when the Senators drew back within a goal, the Canadiens never strayed for their new playing style.

Montreal stayed aggressive on pucks, hounding defenders with a relentless forecheck that Ottawa had no answers for. Every time a Hab was on the puck, they were supported by at least one other red sweater, giving the attack ample chances to start out of the defensive zone.

Montreal Canadiens forward Jesperi Kotkaniemi: “I like [the new system] a lot… I think it’s pretty similar to what we did in Laval last year. I’m feeling pretty comfortable with a lot of things already” #GoHabsGo #THW

Anyone who has followed the AHL team even in passing should recognize Ducharme’s offensive attack as very similar to that of Joël Bouchard’s in Laval. Jesperi Kotkaniemi spent just a dozen games with Bouchard and thrived, so to see his confidence growing inside a similar system isn’t surprising.

Kotkaniemi finished the night with one assist, a 72% Corsi-for percentage, and saw 10 scoring chances, while allowing just two against in his minutes. He looked easily the best he has all year, and if he’s already adapted to the new system under Ducharme, it’s not hard to believe he’s going to continue to get better. It’s no secret that Kotkaniemi sometimes struggled to adjust to Claude Julien’s defence-first mentality, showing brief glimpses of what his potential can be.

With a few games like this under his belt in the last two weeks, and a crucial swing in Western Canada coming up, the time is right for a Kotkaniemi breakout. He battled hard against a Senators team that doesn’t break against Montreal and came out on top. With more games like the one on Tuesday, he is going to be knocking on the door for a much larger role soon.