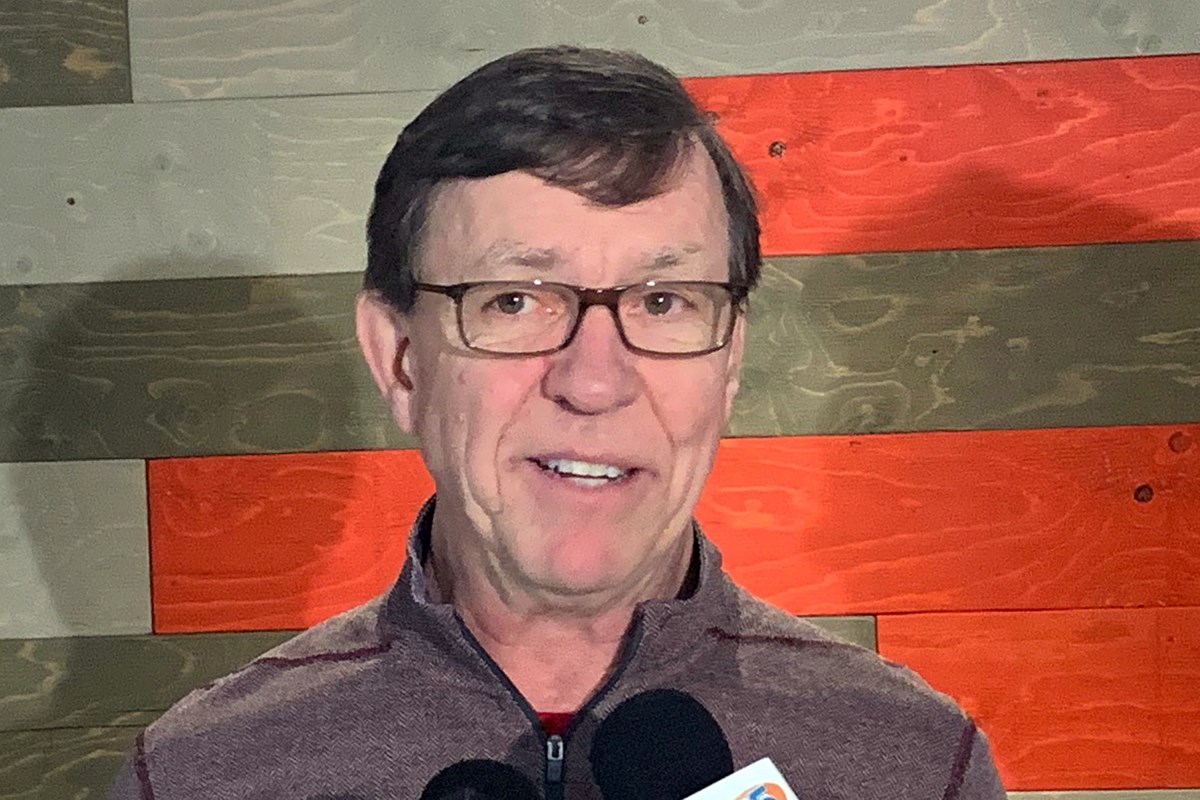 THUNDER BAY – Not even an airplane crash can slow Rick Lang down – at least not for long.

But Lang, who also coaches Krista McCarville’s foursome, who just returned home from a playoff appearance at the Scotties Tournament of Hearts in Moose Jaw, Sask., on Monday was injured in a Bearskin Airline plane crash in Dryden on the journey back to Thunder Bay and had to put his trip to the Brier on hold for a few days while he recovered from a hand injury.

McCarville and teammate Ashley Sippala were also aboard the flight, which crashed on takeoff and hit a snow bank, pieces of the propeller piercing the fuselage and carving into Lang’s right hand.

Lang is also using the added time to get to know his twin grandsons, who were born while the McCarville rink was battling their way into the championship round at last week’s Scottie’s.

“I knew this was going to be an eventful month, at the beginning of February with the Brier and Scottie’s and all the excitement that would go with those events and only being home three days in between. But as the world knows, a few things have happened in between,” Lang said.

His daughter Sarah, who normally plays lead for McCarville, and her husband Jordan, had their twins a little earlier than expected, and caught everyone by surprise.

“I was just sad not to be there for it. And then coming home, of course, very anxious to see them all and the mishap happened with the plane accident,” Lang said.

“We’re well. I want everyone to know we’re OK. The girls are doing well and we’re getting over our injuries.”

Lang’s squad in Kingston will be in tough in a star-studded field that also includes reigning champion Kevin Koe of Alberta, provincial rival Brendan Bottcher and former two-time champion Brad Gushue. Team Jacobs, which retooled and added Mark Kennedy at third in place of Ryan Fry, will be seeking its first title since 2013, a year before they captured Olympic gold in Sochi.

Lang said they’ve been banging on the door for years, reaching the playoffs every year since 2015, but just haven’t been able to break through again.

“Getting through the Brier playoffs and finals is something I think that was a goal of theirs from the beginning. They’ve made changes this year. They have Mark Kennedy on board and he is an absolutely unbelievable player and been phenomenal,” Lang said.

“It’s been a pleasure working with him and the whole team. I hope I’ve supported them and been able to help with what they’ve been doing this year. They’re doing a lot of things right. They’ve got a lot of great habits. They’ve been open to new learning this year.”

It seems to be working. After losing out in the quarterfinals at the Masters, the Jacobs rink has rolled off three straight Grand Slam of Curling titles, capturing the Tour Challenge, a title they won in Thunder Bay a year earlier, the National and the Canadian Open.

“I think if they just continue what they did all year, they don’t have to change a thing. They just have to perform the way they have all year and they have a great chance of winning.”

Leading Novak Djokovic sponsor Lacoste has said it plans to “review” the events that led to the tennis star’s deportation from Australia, highlighting the potential fallout for athletes who remain unvaccinated against COVID-19.

“As soon as possible, we will be in touch with Novak Djokovic to review the events that have accompanied his presence in Australia,” Lacoste said on Monday.

Lacoste, owned by Swiss group MF Brands, signed a multiyear deal with Djokovic as sponsor in 2017. According to Forbes, the men’s world number one earns $30 million a year from sponsorship tie-ups.

The review comes after Djokovic, who has declined to be vaccinated against COVID-19, said he was “extremely disappointed” that the Australian courts had decided to uphold a government decision to cancel his visa. The ruling means he is unable to compete in this month’s Australian Open tournament.

Djokovic had entered Australia with a medical exemption from a vaccine requirement but had his initial visa cancelled. He had sought to stay in the country to compete for a record 21st grand slam title but his legal challenge was unsuccessful. He has now been deported and returned to Serbia.

Djokovic’s opposition to mandatory COVID-19 vaccinations highlights the dilemma facing sports sponsors, which must weigh up their approach when athletes raise objections to widely recommended public health measures such as vaccination.

His participation in the French Open, the next grand slam on the tennis calendar, is also in doubt after Roxana Maracineanu, sports minister for France, said that spectators, staff and players would need to show proof of vaccination to enter sports stadiums and other public places. The tournament in Paris is due to start in May.

Raiffeisen, which agreed a tie-up with Djokovic in April last year, said his “high reputation in central and eastern Europe” was its motivation for the multiyear deal and pointed to “his social commitment”.

But it added that the partnership had been agreed “long before the current reporting on Novak Djokovic and his COVID-19 vaccination status, or his participation in the Australian Open”.

Hublot previously told the Financial Times: “Novak Djokovic is his own person. We cannot comment on any of his personal decisions.”

Lacoste, founded by two tennis players in 1933, thanked the organizers of the Australian Open for “all their efforts to ensure that the tournament is held in good conditions for players, staff and spectators”.

The CEO of Athletics Canada is apologizing for a series of sexually suggestive Twitter exchanges made over a number of months and posted to his personal account.

Dave Bedford posted the tweets as replies to nearly a dozen different Twitter accounts. The tweets have since been deleted.

“It’s my personal account. It’s not like I was sending out photos or tweets myself,” Bedford told CBC Sports. “In this day and age with all we have been going through, I found some of these things funny so I commented. It’s apparent others didn’t feel the same way so I removed them.”

In his personal Twitter bio, Bedford identifies himself as the CEO of Athletics Canada and provides a link to the publicly funded organization’s website, which — as the national governing body of athletics — represents thousands of elite and amateur athletes across the country.

After receiving a number of internal complaints over the weekend, Athletics Canada’s board chair Helen Manning spoke to Bedford who then deleted the offensive tweets and locked his account.

Athletics Canada will hold an emergency board meeting Monday night to decide next steps. Board chair Helen Manning said confidence in Bedford’s ongoing ability to lead will be a central point of discussion and didn’t rule out asking for Bedford’s resignation.

“There are certainly concerns that have been expressed by some of our membership,” Manning said. “Those types of comments are not something that is in keeping with the policy of how we see our people in the public domain.”

“We have spent a great deal of time and effort focused on trying to ensure the safest and most welcoming environment for our athletes and all of our members,” Manning said.

Audrey Giles, a professor at the University of Ottawa and a member of Athletics Canada’s Safe Sport Committee, said Bedford’s behaviour brings his judgment into question.

“If he felt that that sort of public behaviour was acceptable, it raises questions about if he is the right person to be leading an organization through this era of safe sport,” Giles said. “I think it’s just like the hypocrisy of talking about having to hold coaches to a higher account, having to make spaces that are safe for athletes. Yet being somebody who engages in this, frankly, creepy online behaviour with women?

“I recognize that people can have a very diverse and exciting sexual lives. But when you are a leader of an organization, I think that the standards are higher.”

Bedford was hired by Athletics Canada in 2019 and has worked in a variety of leadership roles across Canadian sport, including the Canadian Olympic Committee and the Toronto Argonauts of the Canadian Football League.

The prolific Lewandowski won the award for the second straight year after a season in which he beat Gerd Mueller’s 49-year old record of 40 goals in a single Bundesliga campaign.

“Robert is someone special. He is the greatest footballer in the history of our country. The best Polish ambassador and a role model for young people, not only those playing football,” said Polish Prime Minister Mateusz Morawiecki on Facebook.

The 27-year-old Putellas was at the heart of the Barcelona women’s team which won the Spanish league and the UEFA Champions League.

Chelsea won both the awards for best coach, with Thomas Tuchel winning the men’s award and Emma Hayes named the best women’s coach.

Tuchel had guided Chelsea to the Champions League title after taking over the club in January while Hayes won the Women’s Super League, FA Cup and League Cup treble in England.

The Puskas Award for best goal of the year was won by Argentine Erik Lamela, now with Spanish club Sevilla, for his goal for Tottenham Hotspur against Arsenal.

The Denmark national team and their medical staff won the Fair Play award for their swift response after Christian Eriksen collapsed on the field during the Euro 2020 game with Finland.