Moderna said Tuesday it has reached a deal with the Canadian government to build a “state-of-the-art” manufacturing plant in Canada to make Covid vaccines and potentially shots for other respiratory viruses after the country was plagued by supply shortages earlier this year.

It is also intended to be used on “an urgent basis” to support the country with direct access to vaccines during health emergencies, the company said.

Moderna said it is in discussions with other governments for similar collaborations.

“We are excited to expand our presence and continue our long-term collaboration with Canada,” Patricia Gauthier, Moderna’s lead for Canadian operations, said in a statement. “With our industry-leading mRNA technology platform and rapid drug development capabilities, we look forward to being an active participant in Canada’s robust life sciences ecosystem.”

Fully vaccinated people are still getting infected with Covid. Experts explain why

The world is nowhere near the end of the pandemic, says famed epidemiologist Larry Brilliant

Canada suffered from repeated delays and supply shortages of Covid vaccines this year as it struggled to obtain the shots from other countries that were manufacturing them. The issue forced the government to delay second shots for up to 16 weeks and advise residents to “mix and match” vaccines.

The Biden administration, under pressure from allies worldwide to share vaccines, announced plans in March to ship about 4 million doses of AstraZeneca’s Covid vaccine that it was not using to Mexico and Canada.

The supply of vaccines and pace of inoculations has since increased, Canadian health authorities have said, and residents have since gone on to receive their second doses.

Shares of Moderna were down about 3% Tuesday just before the announcement. The stock is up more than 360% year to date.

TV
WATCH LIVEWATCH IN THE APP
UP NEXT | ETListen

'Up to 1 million' bitcoin processors could be relocated to Alberta from China under energy firm's proposal – CBC.ca

Consumer debt tops $2.36 trillion in third quarter, up 7.3 per cent from last year Equifax Canada says an increase in borrowers helped push total consumer debt to $2.36 trillion in the third quarter for a 7.3 per cent rise from last year, even as mortgage volumes decline.

It says average non-mortgage debt rose to $21,183 for the highest level since the second quarter of 2020, with early signs of strain starting to show in auto loans and credit cards.

Rebecca Oakes, Equifax Canada’s head of advanced analytics, says the rising debt stems from a combination of growth from immigration, pent-up spending, as well as increased borrowing as consumers feel the strain of higher living costs.

Credit card spending in the quarter was up 17.3 per cent from last year to an all-time high for the time period.

There’s been an increase in credit card spending and new cards issued across all consumer segments, including the sub-prime segments, said Oakes in a statement.

She said there are some signs that borrowers are starting to have trouble covering the bills, with average payment rates for those who carry a balance down from a year ago, she said.

“Consumers have been making strong payments, but we are starting to see a shift in payment behaviour especially for credit card revolvers — those who carry a balance on their card and don’t pay it off in full each month.”

Delinquencies on auto loans have also started to trend up, especially those opened since late 2021, she said.

The overall rate of more than 90 day delinquencies for non-mortgage debt was 0.93 per cent, up from 0.87 last year, though insolvencies are still well below pre-pandemic levels.

New mortgage volume dropped 22.7 per cent in the quarter compared with last year and by 14.9 per cent compared with the third quarter of 2019. First-time home buyers are paying over $500 more for almost the same loan amounts as first-time buyers last year.

Overall insolvency rates are up from a year ago but from a relatively low starting point, and there are some areas of concern including a rise in consumer proposals by seniors, said Oakes.

“The true impact of interest rate hikes could be visible by the end of 2023.” 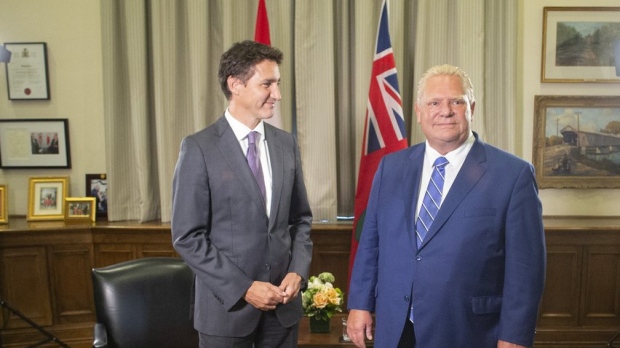 Trudeau says electric delivery vans have started rolling off the line today at the General Motors CAMI production plant in Ingersoll, Ont., which has been retooled to build the company’s BrightDrop all-electric vehicle brand.

The prime minister was joined by Ford and the province’s Economic Development Minister Vic Fedeli to mark the milestone.

The provincial and federal governments each invested $259 million toward GM’s $2-billion plan to transform its Ingersoll plant and overhaul its Oshawa, Ont., plant to make it EV-ready.

The federal government says the Ingersoll plant is expected to manufacture 50,000 electric vehicles by 2025.

Canada intends to bar the sale of new internal-combustion engines in passenger vehicles by 2035. 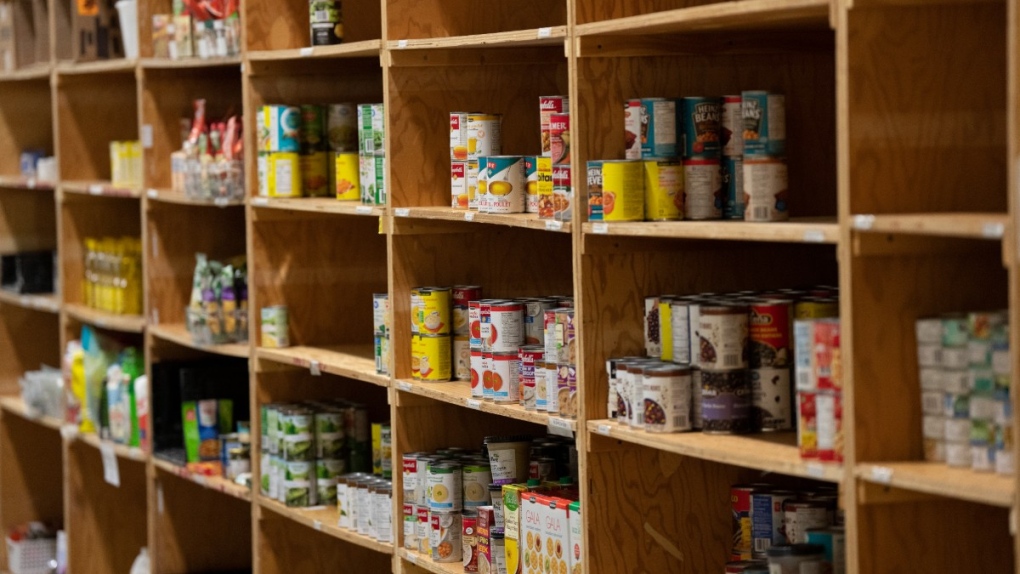 Food prices in Canada will continue to escalate in the new year, with grocery costs forecast to rise up to seven per cent in 2023, new research predicts.

For a family of four, the total annual grocery bill is expected to be $16,288 — $1,065 more than it was this year, the 13th edition of Canada’s Food Price Report released Monday said.

A single woman in her 40s — the average age in Canada — will pay about $3,740 for groceries next year while a single man the same age would pay $4,168, according to the report and Statistics Canada.

Food inflation is set to remain stubbornly high in the first half of 2023 before it starts to ease, said Sylvain Charlebois, lead author of the report and Dalhousie University professor of food distribution and policy.

“When you look at the current food inflation cycle we’re in right now, we’re probably in the seventh-inning stretch,” he said in an interview. “The first part of 2023 will remain challenging … but we’re starting to see the end of this.”

Earlier this year the loonie was worth more than 80 cents US, but it then dropped to a low of 72.17 cents US in October amid a strengthening U.S. dollar. It has hovered near the 74 cent mark in recent weeks, ending Friday at 74.25 cents US.

“The produce section is going to be the wild card,” Charlebois said. “Currency is one of the key things that could throw things off early in the winter and that’s why produce is the highest category.”

In addition to currency risks, much of the produce sold in Canada comes from the United States, which has been struggling with extremely dry conditions.

“The western U.S., particularly California, has seen strong El Nino weather patterns and droughts and bacterial contaminations, and that’s impacted our fruit and vegetable suppliers and prices,” said Simon Somogyi, campus lead at the University of Guelph and professor at the Gordon S. Lang School of Business and Economics.

“The drought is making the production of lettuce more expensive,” he said. “It’s reducing the crop size but it’s also causing bacterial contamination, which is lessening the supply in the marketplace.”

Prices in other key food categories like meat, dairy and bakery are predicted to soar up to seven per cent, the researchers found.

The Canadian Dairy Commission has approved a farm gate milk price increase of about 2.2 per cent, or just under two cents per litre, for Feb. 1, 2023.

“The increase for February is reasonable but it comes after the unprecedented increases in 2022, which are continuing to work their way through the supply chain,” Charlebois said of the two price hikes of nearly 11 per cent combined in 2022.

Restaurant costs are expected to increase four to six per cent, less than supermarket prices, the report said.

Rising prices will push food security and affordability even further out of reach of Canadians a year after food bank use reached a record high, the report said.

The increasing reliance on food banks is expected to continue, with 20 per cent of Canadians reporting they will likely turn to community organizations in 2023 for help feeding their families, a survey included in the report found.

Use of weekly flyers, coupons, bulk buying and food rescuing apps also ticked up this year and is expected to continue growing in 2023, the report said.

“We’re in the era now of the smart shopper,” said Somogyi, also the Arrell Chair in the Business of Food.

“For certain generations, it’s the first time that they’ve had to make a list, not impulse buy, read the weekly flyers, use coupons, buy in volume and freeze what they don’t use.”

Last year’s report predicted food prices would increase five to seven per cent in 2022 — the biggest jump ever predicted by the annual food price report.

Food costs actually far exceeded that forecast. Grocery prices were up 11 per cent in October compared with a year before while overall food costs were up 10.1 per cent, according to Statistics Canada.

“We were called alarmists,” Charlebois said of the prediction that food prices could rise seven per cent in 2022. Critics called the report an “exaggeration,” he said.

“You’re always one crisis away from throwing everything out the window,” Charlebois said. “We didn’t predict the war in Ukraine, and that really affected markets.”