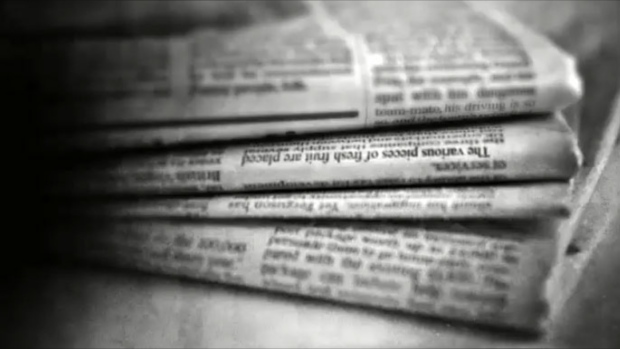 MONTREAL —
The Quebec government welcomed the results of a new commission on the future of news media in the province on Tuesday.

In its report, the commission points out the steep decline in advertising revenue for daily and community newspapers, and suggests spearing two problems with a single thrust by encouraging the government to invest in COVID-centric advertising in the smaller Quebec papers.

This is not a new issue. In the last decade, written media in Canada has had a hard time making ends meet. Since 2010, the take in net advertising for daily newspapers fell by almost 66.5 per cent, plummeting from more than $2 billion to just $777 million, according to News Media Canada (NMC).

Community papers were less hard hit by the loss, but still saw their ad revenue diminish by more than 45 per cent in that same time.

While daily and community news have been struggling, however, they continue to play an important role in the media lives of Quebecers. Indeed, while Internet news has become very prominent in advertising, not everyone has access to online media.

“In many parts of Canada and in Quebec, broadband access is limited,” said Kelly Levson, the director of marketing and research for NMC. “Many sectors of the population, some of which are most relevant to the government’s communications efforts, are not online.”

The commission highlights this as well, warning that the decline of written media could create “media deserts” in more remote areas, and this possibility is closer than you might imagine.

According to the commission’s report, the number of weekly or bi-weekly newspapers in Quebec was almost cut in half between 2011 and 2018, falling from 200 to 132 publications. This hasn’t been a complete death knell to the written news industry, however.

“I think that there’s a big fallacy out there that the print newspapers are having some challenges,” Levson said, “but the challenge is not that people don’t read them. Nine out of 10 Canadians and Quebecers read newspapers. They’re interested in the content and we have the same reach as the digital diet from the United States.”

The issue, Levson says, is more one of convenience. Online advertising is quick, easy to do, and requires little commitment. By comparison, arranging for an ad to be printed in newspapers across the province is more difficult and time-consuming, although it also benefits the domestic industry more strongly.

The commission seemed to agree in its report, pointing out that declining newspapers could also have knock-on effects on other parts of the industry. If most of these papers disappear, for instance, it could mean a significant loss of income for the Canadian Press who sells wires on Canadian news to smaller outlets that cannot cover these events. On top of that, losing outlets also means losing media diversity in the province as a whole.

“In Quebec, we have a very diverse press,” said Michaël Nguyen, the president of the Fédération Professionelle des Journalistes du Québec (FPJQ). “There’s something for everyone, for every point of view.”

“We’re quite well-serviced in terms on information in Quebec,” he added. “We have to maintain this (…). It’s a whole ecosystem and all of its parts are linked together.”

The commission did not make specific budget recommendations in its report, although last year the provincial government had floated the idea of investing $250 million over five years into the industry. This year, government money is used to buys ads that inform Quebecers about COVID-19.

While this kind of investment is a good first step, however, Nguyen says it must be a sustained effort if newspapers in Quebec are to thrive again.

“This year is quite exceptional,” Nguyen pointed out. “And we can’t expect investment to always be this positive.”

And continued investment is certainly one of the most needed steps beyond this year.

“We have to maintain the quality of information we have in Quebec, which is our pride” Nguyen added, “Whether in francophone or anglophone media, we have to carry on. The report already says that the government maintains and improves advertising subsidies, and that it’ll take more than that.”

A Quebec man linked to social media accounts that spoke of taking weapons to Parliament to “clean up house” has been charged after RCMP officers raided his homes and allegedly found 18 firearms.

Raymond Têtu, a 51-year-old resident of Val-des-Monts, Que., about 40 kilometres north of Ottawa, was arrested on Jan. 20 but RCMP only announced the charges Tuesday, after he appeared in court.

Quebec news outlets tied him to the Twitter and Facebook accounts of a man by the same name who is a supporter of the People’s Party of Canada and Donald Trump.

The Twitter account referred to COVID-19 as a “scamdemic,” and a Jan. 2 post, responding to a video of a police raid in Gatineau for allegedly violating lockdown measures, read: “Start shooting the police, this is as bad as home invasion.”

Anti-immigrant, anti-Muslim and anti-Trudeau posts also appeared on the account, including one that called the prime minister a “scumbag” and said “maybe you and your family need to be tough [Sic] a lesson.”

“It will be soon time to take arms to parliament and clean up house,” read another Twitter post.

On Facebook, he wrote that “civil war is needed…Fellow canadians buy as many guns as possible, you will need them to save your country.”

Some of his Facebook posts were labelled “false information” by the social media company.

More firearms were found at a second residence in Gatineau, police said.

“A total of 18 firearms were seized, including an assault rifle and a Thompson sub-machine gun. Four gun silencers and a few thousand dollars of counterfeit U.S. bank notes were also seized,” RCMP said.

He is in custody and returns to court on Friday.

On this day a year ago, the world tragically lost Kobe Bryant — a future Hall of Fame NBA player and, more viscerally, a worldwide icon — as well as his 13-year-old daughter, Gianna, and seven others when the helicopter they were in crashed in Calabasas, California just outside of Los Angeles.

The deaths sent intense shockwaves throughout the sports world, and a collective mourning began for lives taken far too soon.

Bryant was an 18-time all-star who won five NBA championships and spent the entirely of his 20-year career with the Los Angeles Lakers.

Here are some of the tributes to the Lakers legend that have surfaced on social media this Tuesday, a year later.

Kobe will always be my @Lakers brother for life. pic.twitter.com/7WC9x6h4Dl

#KobeBryant’s support for women’s basketball was unparalleled. Many players including @KayNurse11 was able to share a special moment with Kobe and Gigi during the 2019 WNBA All-Star game. They are truly missed. #MambaForver
: @elindsay08 pic.twitter.com/A1FaaibY6P

“The most important thing is to try and inspire people so that they can be great in whatever they want to do.” -Kobe Bryant
Kobe & Gigi… you have inspired people all over the world. We miss you. We love you. #MambaForever pic.twitter.com/lAWAN52kQX

Forever in our hearts pic.twitter.com/vaSEM8kdxt

A 20-year-old Brandon Male has been charged with an Assault.  It is alleged that he intentionally struck his girlfriend with a shovel.  The victim received minor injuries.  The male has been released from custody to appear in court on April 12th.

A 39-year-old Brandon Male has been charged with Possession for the Purpose of Trafficking, Possession of Proceeds of Crime, and Possession of Property Obtained by Crime.  He was found to be in possession of vehicle, which had been reported, stolen.  While being arrested it was found that he had a quantity of Meth on his person and a significant amount of cash.  He has been released to appear in court April 8th.

A 52-year-old Brandon Male has been charged with Assault.  It is alleged that he assaulted his girlfriend in her residence.  The male received medical treatment for her injuries.  The Male was released to appear in court April 19th.

How to see the upcoming full 'Wolf Moon' – CTV News

Indian economy to get shot in the arm from federal budget: Reuters poll – The Guardian