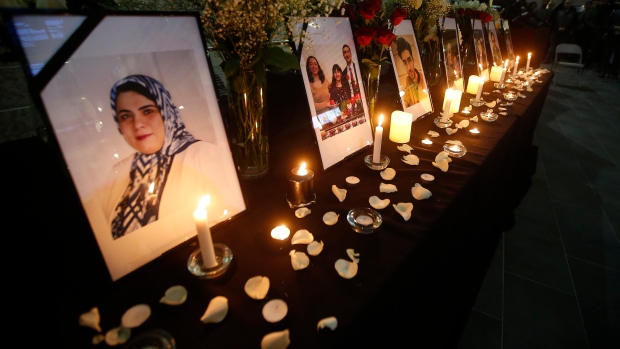 TORONTO —
A Toronto restaurateur called on Canadians to donate $1.5 million to cover funeral costs for the victims of the Iran plane crash on Monday, as he announced a national fundraising campaign to help people who lost loved ones in the tragedy.

Mohamad Fakih, founder of the Paramount Fine Foods restaurant chain, launched the “Canada Strong” campaign, which will be overseen by a charitable fund that also raised money for the families of victims of the Toronto van attack.

Fakih said in addition to grieving, loved ones of the 57 Canadians who died in last week’s crash now also face the stress of paying for funerals.

“I’m calling on all of us Canadians in this moment of need — including, importantly, corporate leaders and businesses across the country — to support these families with the unexpected expenses that have tragically fallen upon them,” he said.

The Ukraine International Airlines flight was shot down by an Iranian missile moments after taking off from Tehran on Wednesday. All 176 people on board were killed, including 138 who were headed for Canada.

Iran has admitted the plane was mistaken for a hostile target amid soaring tensions with the United States.

Fakih called the incident unfair, and said Canada has been caught in the middle of an escalating dispute between the two countries.

He has personally pledged $30,000 to the “Canada Strong” campaign and said he will cover all of its administrative costs to ensure donors know their entire contribution is going to the victims’ families.

Fakih also urged the families affected by the tragedy not to hesitate to access the fund, acknowledging that some might hold back out of a sense of pride.

“You’re not accepting any help from strangers,” he said. “We are one family. One big family. A Canadian family.”

Toronto Mayor John Tory took part in the campaign launch, praising Fakih and encouraging Canadians to step forward with donations, saying the fund is not just intended for Ontarians.

“I hope that Canadians … will see it in their hearts to contribute big or small,” he said. “Every contribution counts. Every contribution is a signal, a tangible demonstration to families of the victims, of just how much in solidarity with them we are.”

This report by The Canadian Press was first published Jan. 13, 2020.

Canadians investigators in Iran and royals in Canada; In The News for Jan. 14 – National Post

Prince Harry and Meghan Markle are set to live in Canada after relinquishing their royal titles. But how, exactly, the duo will do that remains a bit unclear.

They do have quite a few options — they could live in Canada six months at a time without formal paperwork, or they would apply for work visas and stay longer. Or, if the couple truly wants to put down roots in the country, they could apply for permanent residency.

While the royal couple announced plans to step away from their roles in the Monarchy and move to Canada earlier this month, details on what that arrangement will entail have not been made public. It’s unclear how long Prince Harry, Markle and their son Archie will live in the country and where.

The route the couple chooses largely depends on whether Markle, who lived in Canada for several years while acting in the TV show Suits, has permanent residency in Canada already.

“If she is a permanent resident, she can sponsor Harry in the family class,” Usha George, the director of the Ryerson University’s Centre for Immigration and Settlement, told Global News.

George explained that may be easier than Markle sponsoring her husband under the economic class, which has several criteria such as skills, education and work experience.

Prince Harry does not have a college or university degree, but did attend the Royal Military Academy Sandhurst. Markle graduated from Northwestern University’s School of Communication, located in Illinois, in 2003.

If Markle is not a permanent resident, the easiest option available is to live in Canada for six months at a time. This option would give the British and American citizens visitor status in Canada.

Canadian immigration lawyer Evelyn Ackah explained the big limitation to going that route is that they can’t work in the country.

“As long as they maintain their visitor status, for instance, Prince Harry and Meghan Markle could leave and go to the States.”

“Maybe after five months, come back, and the six months time clock starts again. They could do that for quite a while.”

This option could be suitable for the couple, who are retaining access to their U.K. home of Frogmore Cottage. A statement from Buckingham Palace released Saturday also noted the couple will continue some of their work.

“With the Queen’s blessing, the Sussexes will continue to maintain their private patronages and associations,” the statement said.

If Markle is not a permanent resident in Canada, but the family’s goal is to stay in the country for a prolonged time, the scenario is different.

“Meghan Markle could qualify likely, for permanent residency under express entry for the federal skilled worker category,” Ackah said. “She’d probably have enough points to be selected and invited to apply because of her age, she has a degree and has significant work experience.”

Ackah said that would open the path for her husband and son to also become permanent residents.

If the couple doesn’t have jobs lined up, Markle can also apply for the self-employment category, Ackah explained, which is useful for individuals in the arts or sports.

“The self-employed work permit and permanent residency, it’s not tied to an employer, which gives them a lot more flexibility,” she said.

In any case, both George and Ackah explained the duke and duchess will likely have to follow rules like any other American or British citizen.

“They need to qualify as permanent residents or as foreign workers.”

“It’s basically the same as anybody,” Ackah said, noting the only difference is their case could be expedited.

A statement from Immigration, Refugees and Citizenship Canada also noted there are no such provisions in Canada for the royal family.

“There are no provisions in the Citizenship Act that confer Canadian citizenship status to members of the Royal Family,” an email statement to Global News read.

“In order to become legal permanent residents of Canada, they would need to apply through our normal immigration processes. However, members of the Royal Family are generally not required to seek authorization to come to and stay in Canada as visitors.”

‘The Morning Show’ asks: Where should Prince Harry and Meghan Markle live in Canada? – Global News

Prince Harry and Meghan Markle have dominated headlines since the announcement they would be stepping back from their senior royal duties and living primarily in Canada.

Now that the Sussexes have officially given up their His and Her Royal Highness titles, the question on everyone’s minds is where they’ll make a home in the Great White North.

It’s widely speculated the family of three will plant their roots in Vancouver, given that’s near where they spent six weeks over the Christmas holiday season.

READ MORE: Prince Harry speaks out about decision to step back from royal roles ‘with great sadness’

The Morning Show decided to ask viewers where they’d like to see the trio reside. While both Vancouver and Toronto are great options, viewers have one small Canadian city in mind: Moose Jaw.

With a population of only 33,000 — and no paparazzi in sight — viewers think the Saskatchewan city would be the perfect place to call home.

Even Mayor Fraser Tolmie decided to throw his city’s hat into the ring, inviting Harry and Markle to give Moose Jaw a try.

“As Mayor of Moose Jaw I would be happy to welcome the Duke and Duchess of Sussex to our community,” he tweeted on Jan. 14. “Absolutely no paparazzi and home of the worlds [sic] tallest Moose! Let me know when you’re ready to talk about the campaign!”

1:22
Where should Meghan Markle and Prince Harry live in Canada?

Where should Meghan Markle and Prince Harry live in Canada?

While nothing is known for sure about where the couple will call home, Prince Harry broke his silence over the weekend regarding the news of his exit from the Royal Family.

“Before I begin, I must say that I can only imagine what you may have heard or perhaps read of the past few weeks,” he says in a video clip of his speech posted to the official Sussex Instagram account.

A statement Saturday from Buckingham Palace confirmed the couple will be required to “step back from royal duties, including official military appointments” and will no longer receive public funds for royal duties.

“I want you to hear the truth from me, as much as I can share, not as a prince or a duke but as Harry,” the prince says. “The same person that many of you have watched grow up over the last 35 years. But now with a clearer perspective.

“I also know that you’ve come to know me well enough over all these years to trust that the woman I chose as my wife upholds the same values as I do,” Harry says. “And she does. And she’s the same woman I fell in love with. We both do everything we can to fly the flag and carry out our roles for this country with pride.

“We were hopeful and we were here to serve,” he says. “For those reasons, it brings me great sadness that it has come to this.” 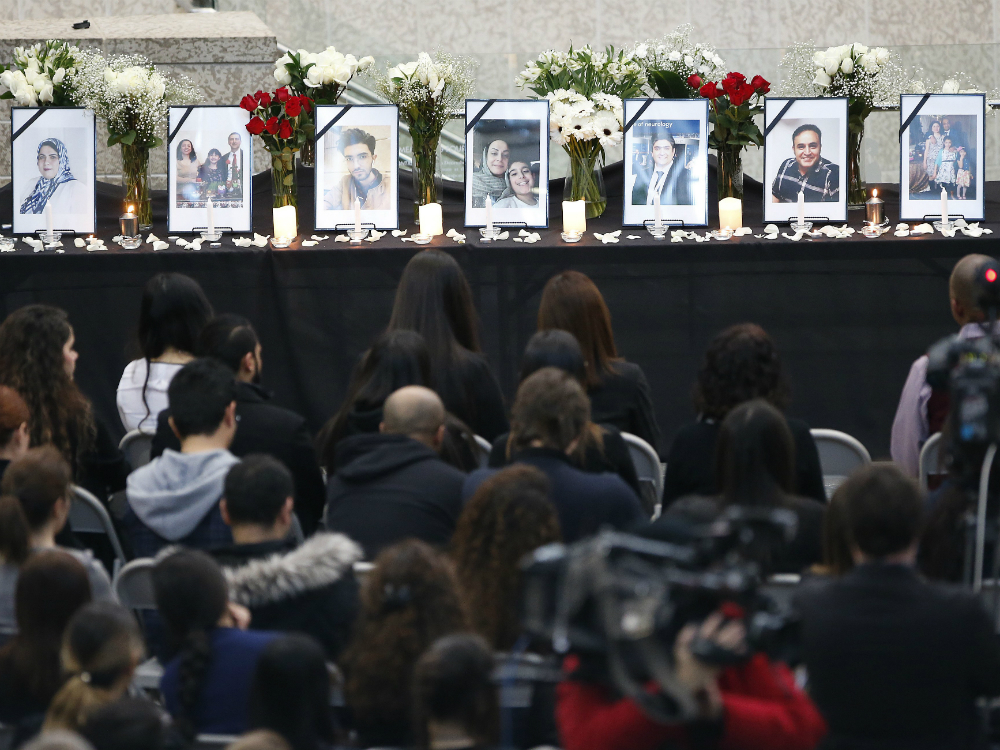 DUBAI — Iran considers the passengers with dual nationality, who were on a Ukrainian plane that was shot down accidentally earlier this month, killing all on board, to be Iranian citizens, a Foreign Ministry spokesman said on Monday.

Many of the 176 who perished in the disaster were Iranians with dual citizenship, which is not recognized by Iran. Canada had 57 citizens on board.

“We have informed Canada that Tehran considers dual nationals who were killed in the plane crash as Iranian citizens … Iran is mourning their deaths,” Foreign Ministry spokesman Abbas Mousavi told a televised weekly news conference.

Canadian Foreign Minister Francois-Philippe Champagne last Wednesday dismissed the Iranian position on dual nationality as “nonsense.” Prime Minister Justin Trudeau said on Friday the issue had not really come up because the Iranians recognized the importance of the families’ wishes.

“So far, we have assurances from them (Iran) that this will happen,” a Canadian government official said on Monday, referring to the families’ wishes being respected. “Of course, we will judge them on their actions.”

The official requested anonymity given the sensitivity of the situation.

As protests erupted in Iran after the plane disaster, the British ambassador in Tehran was briefly detained https://www.reuters.com/article/us-iran-britain-envoy-arrest/uk-denounces-brief-arrest-of-envoy-in-tehran-as-violation-of-law-idUSKBN1ZA0WW. Officials said he was at an “illegal” rally, while the envoy said he was attending a vigil for victims. Britain criticized his detention.

“Iran respects all foreign diplomats in Iran as long as they do not violate international laws,” Mousavi said in reference to the detention.