The head of Winnipeg’s Bear Clan says he wants a board member gone after a series of Twitter posts, including one where she allegedly suggested people who want police budgets reduced be blocked from calling 911.

The tweets from Rejeanne Caron’s twitter account are no longer publicly viewable, but Bear Clan co-founder and executive director James Favel said they were “problematic to the highest level.”

“It’s remarkable and shocking that we could have somebody with that mindset in our group for so long,” Favel said.

In her Twitter profile, Caron identifies herself as a frontline police officer and a former Conservative party candidate for the 2019 federal election.

Along with being a Bear Clan Board Member, she also says she’s a sex crimes investigator and francophone Métis.

“The views expressed are my own,” her bio reads.

Petition started to have Caron removed

An online petition has now been started by an unnamed Bear Clan volunteer to have Caron removed from the organization’s board.

The petition has more than 1,000 signatures. CBC News reached out to the author of the petition, who declined an interview.

The petition lists examples of some of Caron’s tweets, retweets and replies, which allegedly include denying systemic racism in policing exists and saying that Chief Adam Allan was lying after he accused Fort McMurray RCMP of assault.

Other tweets of Caron’s allegedly include calling the Black Lives Matter movement “new terrorists” and using the hashtag #AllLivesMatter, according to the petition.

She also openly criticized a number of elected representatives, including the prime minister, according to Favel.

“We are not here to vilify anyone. She’s exercising her democratic right to free speech and we respect that,” he said.

But Favel said the issue is that Bear Clan is not supposed to be political, and the views Caron is expressing are “diametrically opposed to the way we conduct ourselves and the way we think.”

CBC News has not been able to independently verify the tweets described by the petition and Favel.

‘I made a colossal mistake’: Favel

Favel, who founded the Bear Clan as an Indigenous-led, grassroots street patrol group in Winnipeg, said all volunteers and staff have to follow a code of conduct on social media posting.

If board members aren’t currently bound by the code, they should be, he said.

“I bear all the responsibility for this. I chose her to be on the board. I feel that I made a colossal mistake here,” Favel said.

Caron is currently still a board member, which she has been since 2018, Favel confirmed.

It will be up to the board to remove her, he said.

“To me, it’s a no-brainer. She should be asked to step down, but they haven’t done that yet,” he said. “The board needs to be responsive to this, and needs to act quicker.”

Board meeting to discuss future of Caron

Board chair Brian Chrupalo, who is also a police officer, said the board plans to meet to discuss the future of Caron soon.

Chrupalo said they’ll hear all sides of the story before making a decision, and will be making more comments in the future.

“I hope people aren’t going to judge the whole organization based on one incident, which again, I don’t have the full details of,” Chrupalo said.

The board had previously posted to The Bear Clan’s Facebook page, which has since been deleted.

ST. CATHARINES, ON, July 3, 2020 /CNW/ – The federal government will be making an announcement related to housing in St. Catharines.

Media are invited to join Chris Bittle, Member of Parliament for St. Catharines, on behalf of The Honourable Ahmed Hussen, Minister of Families, Children and Social Development.

Media are asked to wear sturdy shoes and a medical or cloth mask.

In the interest of ensuring adherence to the 10-person limit on gatherings, media are requested to RSVP to Wilbur McLean at [email protected].

For years, political journalists have been briefed off-camera but on the record by the prime minister’s official spokespeople, who are civil servants rather than political appointees. The briefings usually take place twice a day, though during the U.K.’s coronavirus lockdown they have been held once a day by conference call.

The government said Friday that it plans to replace the afternoon briefing with a televised event hosted by a professional broadcaster. The morning briefing will continue in the current format. The change will take effect later this year.

Johnson told LBC radio that the government’s daily televised coronavirus news conferences had been a success. The briefings involving ministers and scientists were held daily between March and late June.

“People have liked a more direct, detailed information from the government about what is going on,” Johnson said.

“We do think that people want direct engagement and want stuff from us, and so we’re going to have a go at that.”

Johnson said he would “pop up from time to time” at the briefings.

Viewers around the world are used to seeing televised White House briefings by the U.S. president’s press secretary, though these have become sporadic under the Trump administration. 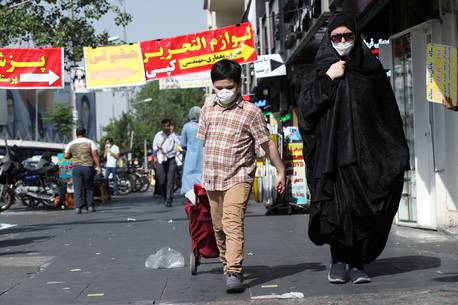 (Reuters) – Total coronavirus cases rose to 235,429 in Iran on Friday, with 154 deaths in the past 24 hours bringing the death toll to 11,260, authorities said as the country tries to fend off new infections after easing its lockdown restrictions.

Eight out of 31 provinces are considered in a red status, meaning the epidemic has been on the rise, while seven, including the province where Tehran is located, are on alert as the virus is still a threat, Health Ministry spokeswoman Sima Sadat Lari said on state TV.

State television is airing warnings such as “Coronavirus is very close” and “Let’s take the coronavirus danger seriously”.

Authorities launched a campaign on June 27 to motivate a reluctant public to use face masks. Reporters interviewing people in the streets chastise those who are not wearing them.

The country, which has had the worst coronavirus outbreak in the Middle East, has seen a sharp increase in infections and deaths since restrictions were gradually lifted from mid-April.

It has been divided up into white, yellow, and red regions based on the number of infections and deaths.

Full buck moon with a lunar eclipse visible this weekend – BC News – Castanet.net