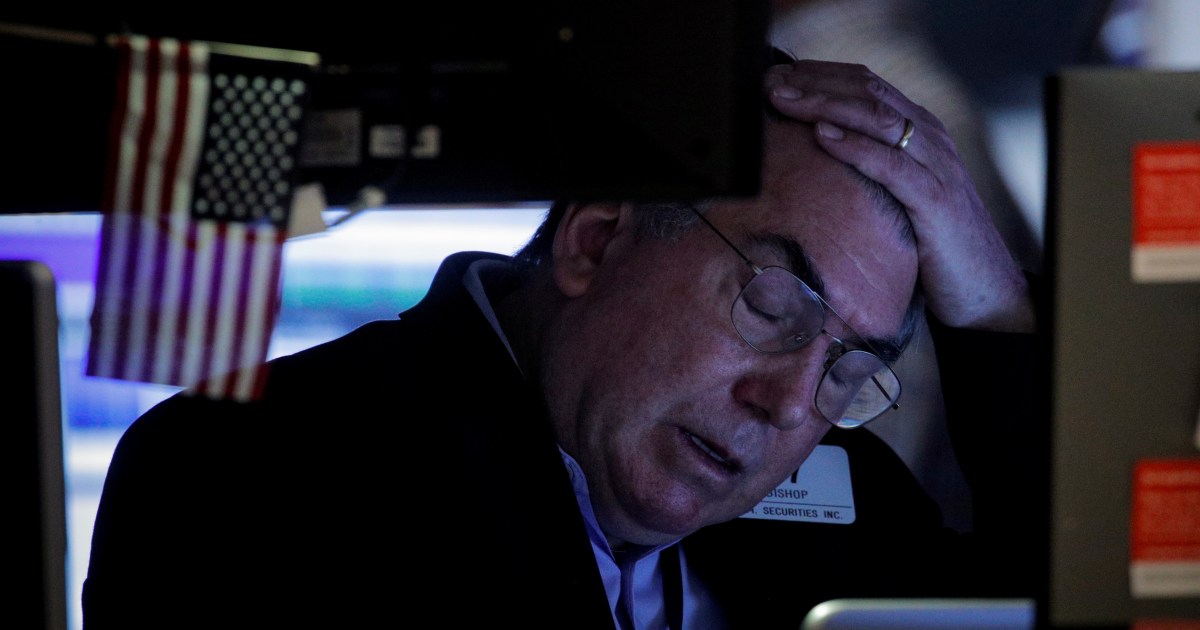 In testimony before the Senate Banking Committee, Powell indicated that he no longer considers high inflation as “transitory” and that the Fed would revisit the timeline for scaling back its bond-buying programme at its next meeting in two weeks.

“Powell’s comments threw a monkey in the wrench in market thinking in terms of potential taper timing. You’re seeing as a result of that, risk-off across the board,” said Michael James, managing director of equity trading at Wedbush Securities in Los Angeles.

“You also have to factor in the Omicron variant concerns. You can argue whether they’re more headline risk or reality risk but regardless, it’s having a significant impact on oil, and everything that’s tied to economic growth.”

Powell’s comments also prompted speculation among some investors about a potential acceleration in interest rate hikes.

“The principal contributor to the decline in stock prices today is the Powell commentary, regarding the upcoming Fed meeting, about accelerating the tapering of their bond-buying programme, which obviously leads to the prospect that rate hikes come sooner next year,” said Mark Luschini, chief investment strategist at Janney Montgomery Scott in Philadelphia.

Meanwhile, the market was also left waiting for information about how dangerous the Omicron variant might be, the degree to which current coronavirus vaccinations could offer protection and the additional restrictions governments might have to impose that could hurt the economy, Luschini said.

Tuesday’s declines were broad-based, with all the 11 major S&P sectors down. Communication services was the lead decliner by late afternoon. As oil prices tumbled, energy was also under pressure throughout the session.

Monday’s rally saw stocks regain some of the ground they had lost on Friday when the market first sold off on news of the virus variant.

While the US Food and Drug Administration said it hopes to have information about the effectiveness of current COVID-19 vaccines against Omicron, vaccine companies appeared divided.

BioNTech’s chief executive said the BioNTech and Pfizer COVID-19 vaccine will likely offer strong protection against severe disease from the variant, while Moderna Inc’s CEO told the Financial Times that COVID-19 shots are unlikely to be as effective against the new variant as they have been previously.

Moderna shares fell while those of Regeneron Pharmaceuticals Inc were also under pressure after it said its COVID-19 antibody treatment and other similar drugs could be less effective against Omicron.

Travel and leisure stocks slumped, with S&P 1500 Airlines and the S&P 1500 Hotels, Restaurant and Leisure indexes both declining on concerns of more border restrictions.

The virus uncertainty has triggered fresh alarm at a time when supply chain logjams are weighing on economic recovery and central banks globally are contemplating a return to pre-pandemic monetary policy to tackle a surge in inflation.

Why Canada is unlocking its vault of maple syrup – CBC.ca

Canada’s maple syrup industry has become an international focus in recent days, with headlines shouting that the country has been forced to tap into its strategic reserve to make up for shortages.

Quebec produces about 73 per cent of the all maple syrup in the world. And the Quebec Maple Syrup Producers (QMSP), an organization that governs the province’s maple syrup producers, has said it will release about 22.7 million kilograms of maple syrup from its strategic reserve into the market by February.

For some, the headlines may have been an eye-opener that Canada even has a stockpile of maple syrup. CBC Explains the purpose of this reserve, why it had to be tapped into, and explores whether there was ever a shortage of maple syrup.

What is the strategic reserve?

Quebec’s maple syrup industry is subject to a supply-management system, meaning it employs a quota system run by the QMSP which dictates market volume. The QMSP also controls the Global Strategic Maple Syrup Reserve, which can hold more than 45 million kilograms of maple syrup.

The reserve was created in 2000 to keep syrup in stock and ensure a constant supply for national and international markets, regardless of the size of the harvest, Hélène Normandin, a spokeswoman for QMSP told CBC’s As It Happens.

One site, the Laurierville Plant and Warehouse, in the Centre-du-Québec region, covers an area of 24,805 square metres – the equivalent of five football fields. That site alone can store 25 million kilograms of maple syrup, or 94,000 barrels.

In years when the yield is good, and more syrup is produced than needed, the extra can be sold to the QMSP and stored  “so that when there’s bad years, you have enough to keep people stocked up with syrup on their pancakes,” Farrell said.

Why did they have to tap into the reserve this year?

“It was an average season, not bad, but not as big as the two last seasons — 2019 and 2020 were just amazing, wonderful years of production,” Normandin said.

However, worldwide demand has increased by more than 20 per cent — a spike industry experts believe was partly fuelled by more people cooking at home during the pandemic — and that has strained the supply

How did the weather affect the yield?

Not every year is a perfect year for every agricultural harvest. And this was one of those years which was not ideal in terms of maple syrup production, said Abby van den Berg, a research associate professor at the University of Vermont’s Proctor Maple Research Center in Underhill, Vt.

Many places didn’t have good weather for sap flow until later in the production season, she said.

Was there really a ‘shortage’ of syrup.

It was headlines like those that made Van den Berg bristle, she said.

“We had a year where the harvest was not super. It actually wasn’t terrible. It wasn’t as good as it had been in past years, and the reserve was there to perform its function,” she said. “And there was no disruption in supply. There is no shortage.”

“All of the headlines said ‘maple syrup shortage,'” she said. “And literally, there is no shortage because of the reserve.”

Philippe Charest-Beudry, the owner of Ste-Anne-de-la-Rochelle, Que.-based Brien Maple Sweets, which packages and sells bottles of maple syrup, said his company has been able to fill every contract so far this year.

“I’ve not heard in the industry other players that we’re not able to meet contracts,” he said.

Has the reserve ever run into trouble with its stock?

Between 2011 and and 2012 around 3,000 tonnes were stolen from a storage facility in Quebec. But it was a few years earlier than that when the strategic reserve actually did run dry.

“People probably don’t remember, but in 2008, after two or three years in a row of bad production, just bad weather, [they] ran out of syrup in the reserve,” said Mike Farrell

“There was nothing there and there wasn’t enough syrup to go around. Prices spiked. We lost a lot of markets for pure maple syrup,”he said.

Ray Bonenberg, former president of the International Maple Syrup Institute and a maple syrup producer near Pembroke, Ont., said 2008 was an “awful year in production.”

“It was abnormally cold until April 1st and then it got really warm, and I know my season was like eight days so it was disastrous,” he said. “The reserve was right down to the bottom, and has been building it up.”

What does this mean for next year?

Farrell said the 22.7 million kilograms of maple syrup represents a  “significant amount to take out the reserve this year.” But what does that mean for the near future of the reserve?

There are currently around 50 million maple syrup taps in Quebec. In July, the QMSP approved the issuance of seven million new ones to meet the demand.

“From our  perspective, we believe it should solve the issue on the short term basis,” said Charest-Beudry, “I don’t see  a season next year where there’s no more maple syrup in the grocery store.”

Royal Bank of Canada announced a dividend hike and plans to repurchase tens of millions of its shares on Wednesday despite also reporting quarterly profit that trailed expectations.

In a release, RBC said it will raise its quarterly dividend 11 per cent to $1.20 per share. The bank said it’s also seeking approval from the Office of the Superintendent of Financial Institutions (OSFI) to buy back up to 45 million of its common shares.

It’s the second such move this week, after Bank of Nova Scotia similarly announced plans for a buyback and dividend hike on Tuesday. Both banks are doing so after OSFI recently lifted its pandemic-era prohibition on share repurchases and buybacks.

RBC also said on Wednesday its 2021 fiscal year profit climbed 40 per cent year-over-year to $16.1 billion. In the fiscal fourth quarter, which ended Oct. 31, the bank’s net income rose 20 per cent to $3.89 billion. That bottom-line performance was helped in part by a release of $227 million from funds that were previously set aside for loans that could go bad. It’s the third consecutive quarter that RBC moved cash out of its provisions for credit losses and funneled that money into its profit stream.

On an adjusted basis, the quarterly profit worked out to $2.71 per share. Analysts, on average, were expecting $2.81.

“Our overall  performance  in  2021  reflected  strong  earnings,  premium  shareholder performance,  and  highlighted  our ability to successfully  navigate  a  complex  operating  environment  while  continuing  to  invest  in  talent  and  innovations  to  support  future growth,” said Dave McKay, RBC’s president and chief executive, in a release.

RBC’s bread-and-butter personal and commercial banking unit was the primary profit driver in the latest quarter, as net income in that division rose 35 per cent year-over-year to $2.03 billion, in part thanks to the release of $208 million that was previously provisioned for potentially sour loans.

Royal Bank’s domestic banking business also benefitted from double-digit growth in its mortgage book. Indeed, in a supplemental release Wednesday, RBC said it had an average Canadian mortgage balance of $329.5 billion in the fourth quarter; that represents year-over-year growth of almost 13 per cent compared to the balance of $293 billion in the fiscal fourth quarter of 2020.

Fourth-quarter profit from the bank’s capital markets unit rose 10 per cent to $920 million, with RBC attributing some of that to a rise in mergers and acquisitions activity.