The dollar edged higher against safe-haven currencies such as the yen and Swiss franc after reassuring news on the Omicron COVID-19 variant, while units like the Australian dollar that had weakened in recent weeks on growth worries also advanced.

While Omicron has spread to about one-third of U.S. states as of Sunday, Dr. Anthony Fauci, the top U.S. infectious disease official, told CNN that “thus far it does not look like there’s a great degree of severity to it”.

“The absence of negative developments surrounding Omicron over the weekend appears to be helping markets stabilize today after the dramatic moves at the end of last week,” Marc Chandler, chief market strategist at Bannockburn Global Forex, said in a note.

The dollar climbed 0.5% against the Japanese yen and rose 0.9% against the Swiss franc. The yen and the franc typically draw investors looking for safety when economic or geopolitical tensions rise.

The dollar fell 0.3% against the Japanese currency on Friday..

The greenback’s losses on Friday had also followed a below-forecast jobs report, though the data did little to shake market expectations the Federal Reserve will accelerate the pace of unwinding stimulus and raise interest rates, starting next year.

Investors have grown more bullish on the dollar in recent weeks, with net long bets on the greenback climbing to the highest level since June 2019, data from the U.S. CFTC showed on Friday.

Meanwhile, the Australian dollar rose as much as 0.64%, rebounding from the 13-month low hit last week.

Russia’s rouble slipped into the red in late trading on Monday after U.S. President Joe Biden warned his Russian counterpart Vladimir Putin of severe economic consequences in case of a Ukraine invasion ahead of a call between the two men on Tuesday.

The Canadian dollar strengthened against its U.S. counterpart on Monday as oil prices rose and attention turned to a Bank of Canada interest rate decision this week, with the currency recovering from its lowest level in more than two months.

Elsewhere, cryptocurrencies nursed big losses from a wild weekend that at one stage crushed bitcoin more than 20%. Bitcoin slipped 0.6% to around $49,166.35 on Monday.

China cut the amount of cash most banks must hold in reserve, acting to counter the economic slowdown in a move that puts the central bank on a different policy path than many of its peers.

The People’s Bank of China will reduce the reserve requirement ratio by 0.5 percentage point for most banks on Dec. 15, releasing 1.2 trillion yuan (US$188 billion) of liquidity, according to a statement published Monday.

The reduction was signaled by Premier Li Keqiang last week when he said that authorities would cut the RRR at an appropriate time to help smaller companies, and is the second reduction this year. The decision comes after recent data showed the economy and industry stabilizing, although Beijing’s tightening curbs on the property market have led to a slump in construction and worsened a liquidity crisis at developer China Evergrande Group and other real-estate firms.

The cut is a “regular monetary policy action,” the PBOC said, pre-empting expectations that the decision was the start of of an easing cycle. “Prudent monetary policy direction has not changed,” it said, adding that the bank “will continue with a normal monetary policy, maintaining the stability, consistency and sustainability of policy, and won’t flood the economy with stimulus.”

However, with the U.S. Federal Reserve and other global central banks looking to tighten policy, the move to add stimulus by the PBOC makes the divergence between China and much of the rest of the world even clearer. 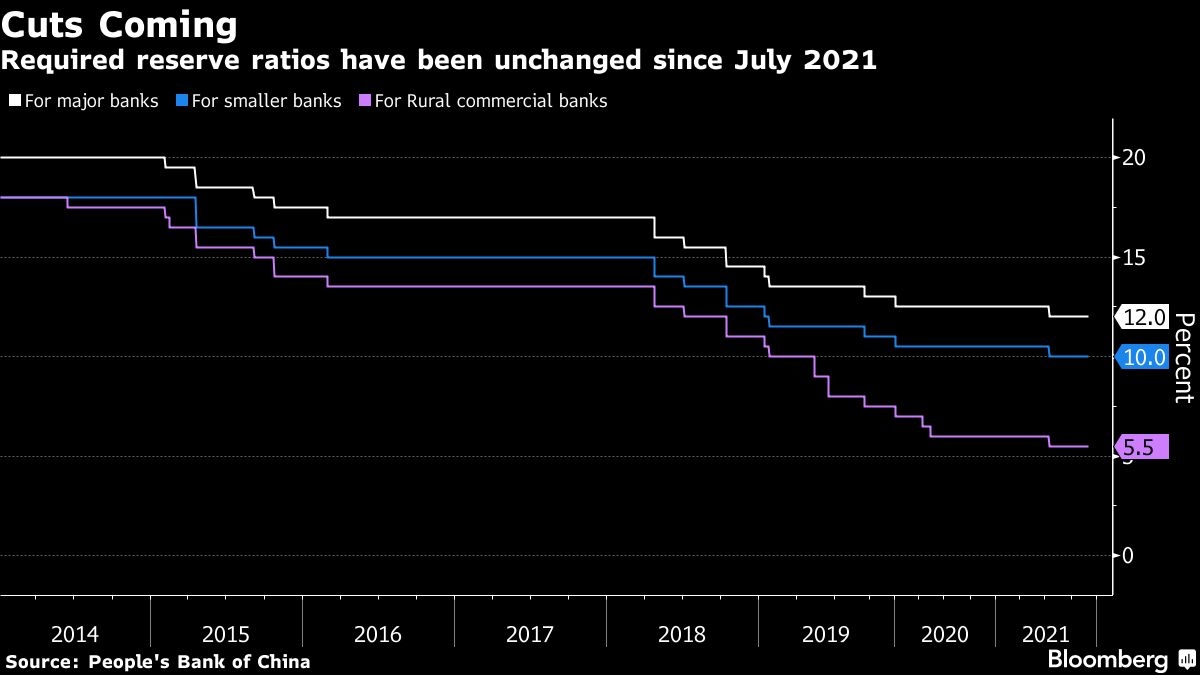 “We think the reduction would help offset the headwinds facing the economy, particularly in the first quarter of 2022. We maintain our view that an additional 50-100 basis points of RRR cut would come next year.”

Separately, the Communist Party’s Politburo said China will continue to implement a proactive fiscal policy in 2022, and prudent monetary policy will be flexible and appropriate, and maintain reasonably ample liquidity, the official Xinhua News Agency. The Monday meeting of the Politburo will be followed by the Central Economic Work Conference sometime this month, which will flesh out economic policy plans for the next year.

The cut will be applied to all banks except those that are already on the lowest level of 5 per cent, which are mostly small rural banks, according to the statement. The weighted average ratio for financial institutions will be 8.4 per cent after the cut, down from 8.9 per cent previously, the PBOC said in a separate statement.

Some of the money released by the RRR cut will be used by banks to repay maturing loans from the PBOC’s medium-term lending facility, and some of it will be used to replenish financial institutions’ long-term capital, the central bank said. There are almost 1 trillion yuan worth of the 1-year loans maturing on Dec. 15, the day the cut takes effect.

Even with the deepening housing market slump, authorities had been restrained in adding new support policies, holding monetary policy steady and maintaining a measured pace of fiscal spending. However, the PBOC signaled an easing bias in the latest monetary policy report last month, while the State Council urged local governments to speed up spending.

“The aim of the RRR cut is to strengthen cross-cyclical adjustment, enhance the capital structure of financial institutions, raise financial services capabilities to better support the real economy,” the PBOC said. The cut will effectively increase long-term capital for banks to serve the real economy, and the PBOC will guide banks to step up their support for small businesses, it said.

A cut in the reserve ratio doesn’t directly lower borrowing costs, but quickly frees up cheap funds for banks to lend. The reduction will lower the capital cost for financial institutions by about 15 billion yuan each year, which will lower the overall financing cost of the economy, the PBOC said. 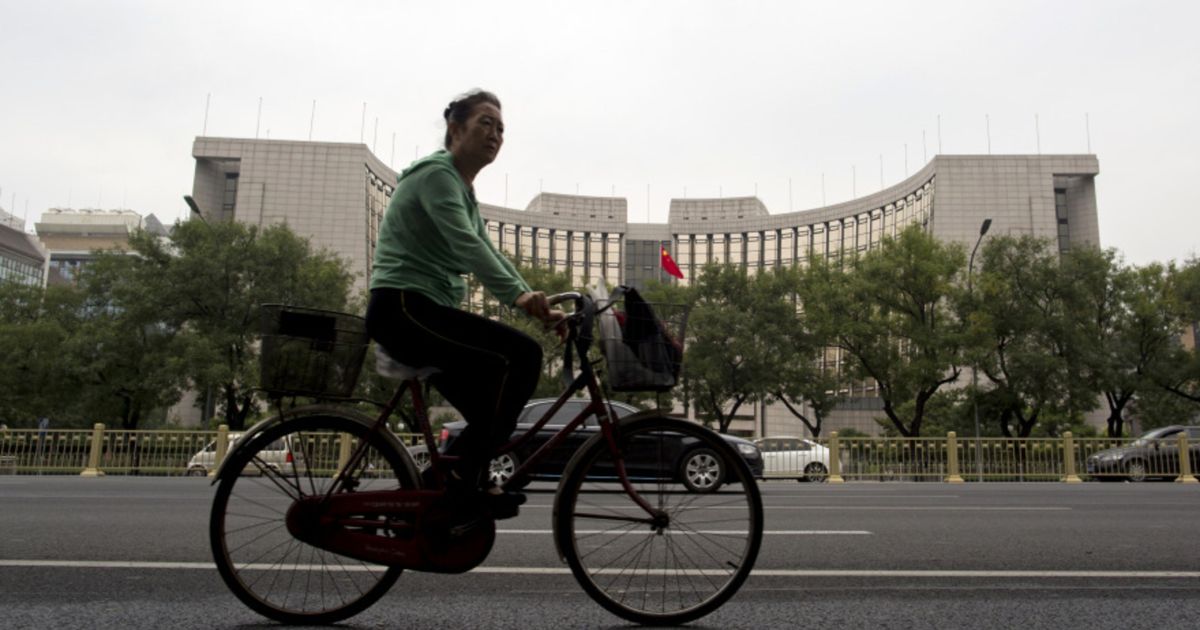 Advisers to Beijing will recommend a 2022 growth target that’s lower than the target that had been set for 2021.

Ongoing stress in China’s property sector is likely to slow down the country’s economic growth next year, a government think-tank has warned.

The world’s second-largest economy is expected to have expanded by about 8 percent this year, according to the annual blue book on the economy from the Chinese Academy of Social Sciences (CASS), a top government think-tank. It warned that the property downturn was likely to persist and weigh on the expenditures of local governments next year.

Advisers to the government will recommend that authorities set a 2022 economic growth target lower than the target set for 2021 – or “above 6 percent” – Reuters reported, amid growing headwinds from a property downturn, weakening exports and strict COVID-19 curbs that have impeded consumption.

It urged the central government to proactively engineer a soft landing for the property sector, to avoid failed land auctions in big cities and to fend off risks of quickly falling property prices in smaller cities, the report said.

China’s move to wean property developers away from rampant borrowing has translated into loan losses for banks and pain in credit markets, as cash-strapped builders fall into distress, increasing risks across the economy.

Property behemoth China Evergrande is facing one of the country’s largest defaults, prompting the authorities to step in and oversee risk management at the company.