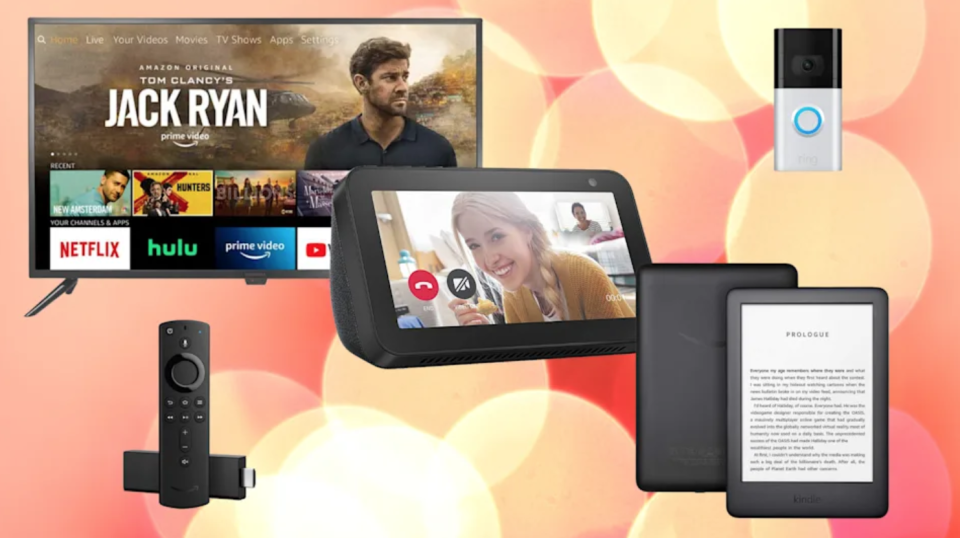 We may receive commission from purchases made via links on this page. Pricing and availability are subject to change.

Keep in mind that hot deals always so quickly; even Amazon runs out of stock sometimes. So if you see something that’s on your shopping list, grab it before it’s gone or it expires.

(Pro tip: If you have Amazon Prime, you’ll get free shipping, of course. Not yet a member? No problem. You can sign up for your free 30-day Amazon Prime trial here.)

Blink makes a variety of highly rated smart-home gear, including indoor and outdoor cameras, video doorbells and floodlights. Just about everything in the lineup is on sale right now, with discounts of up to $160 and some of the lowest prices on record.

For example, you can get the Blink Mini indoor smart camera for just $20, an all-time low. But there’s an even better quantity discount: three Blink Mini cameras for $50.

In case you haven’t been paying close attention, Amazon’s Echo smart speakers and displays go on sale a lot. These deals — which are good until Nov. 24 — don’t represent everything in that product lineup, but they do represent some of the lowest prices on record. Case in point: The new-for-2021 Echo Show 5, which you can now get for just $45 — a $40 discount.

Notably absent here are the larger Echo displays, namely the Echo Show 10 and newer Echo Show 15. Maybe we’ll see deals there on Cyber Monday? If not, holiday sales are just around the corner.

Here’s the best thing I can tell you about the Eero mesh-networking system I bought a few years ago: I never think about it. Once it was set up, it just worked and kept on working, slinging strong Wi-Fi signals to all corners of my house.

It’s a Fire sale, get it? Amazon’s tablets are already a bargain at their regular prices, but many of these Black Friday deals are downright historic (and available until Nov. 30). For example, the current-generation Fire HD 10 (32GB) is just $75, a full 50 percent off and the lowest price ever. It may not have the polish of the latest entry-level iPad, but that model starts at $329 and doesn’t offer expandable storage. You could buy four Fire HD 10s and still come out ahead.

Several of Amazon’s Fire TV products (including the plug-in streaming sticks and Recast DVRs) are on sale for the lowest prices since, well, last year around this time. So if you’re looking to raise your streaming game or record over-the-air TV shows, this is the time to pounce.

Worth noting: The new-for-2021 Fire TV Stick 4K Max has been on sale for $35 for about a week already, but it’s the first discount since the product’s September debut. This is the stick to pick if you want super-speedy navigation and support for console-free gaming.

Here are all the Fire TV deals right now:

The Kindle-sale selection is slim right now, but what’s there is good: The current-generation Kindle e-reader is down to just $50, tying the lowest price on record for only the second time. (If you’re hoping for a Paperwhite deal, nothing yet — but stay tuned, I guarantee it’s coming.)

Also available: The Kindle Kids for $60 (save $50) and Kindle Paperwhite Kids for $115 (save $45). These models include a colorful cover, an Amazon Kids+ subscription and a 2-year worry-free warranty. (Honestly, if you’re thinking about the standard Kindle for $50, grab the Kids model for only $10 more. The cover and warranty alone are well worth it.)

If you’re looking to replace an existing wired doorbell with one that’s smart, look no further: The new Ring Video Doorbell Wired is on sale for just $42, the lowest price to date. (I think it was already a steal at $60.) With it you can get a live video feed from your front porch, get notified of movement and even carry on two-way conversations — all from your phone.

You can decide later if you want to add the indoor chime, which plugs into any AC outlet to give you the ol’ “ding dong” that’s otherwise missing, or just buy the doorbell with chime. Either way, the latter costs $30. (No Black Friday savings to be had, alas.)

Looking for more great Amazon deals? Check these out:

Samsung recently revealed an Unpacked event is coming but didn’t set a specific date for the keynote. Rumours previously indicated that the event would take place on February 8th. However, information from reliable tipster Ice Universe suggests the S22 series will instead be revealed on February 9th.

Ice Universe reportedly made the post on the China-based microblogging site Weibo, stating that the Galaxy S22 series will launch on February 9th alongside the Galaxy Tab S8.

However, Digital Daily says that the phone series will launch on February 8th, with the devices releasing on February 24th.

Rumours indicate Samsung’s Galaxy S22 Ultra will feature a Snapdragon 8 Gen 1 processor, up to 12GB of RAM, 512GB of storage and work with an S Pen. The other S22 models will lack the S Pen, sport an S21-like design, a trio of cameras, and the aforementioned Snapdragon 8 gen 1 chipset.

Samsung will likely unveil the official launch date for the Galaxy S22 series in the coming weeks.