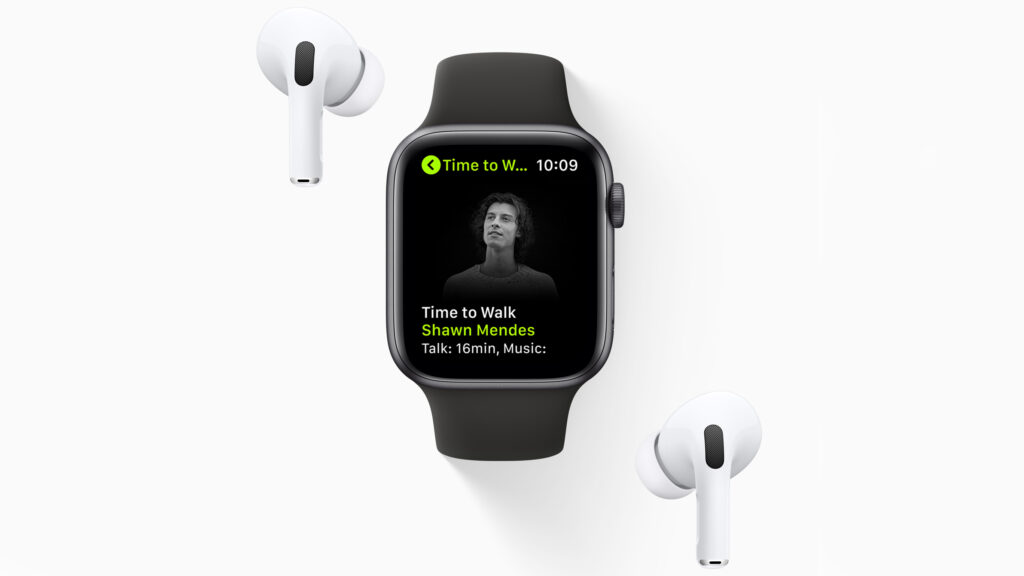 Apple has revealed a new ‘Time to Walk’ feature for the Apple Watch and Apple Fitness+ subscribers.

According to the company, Time To Walk offers “an inspiring new audio walking experience on Apple Watch for Fitness+ subscribers” that aims to encourage subscribers to get out and walk more often.

With Time To Walk, notable celebrities like country music star Dolly Parton, NBA player Draymond Green, Canadian musician Shawn Mendes and Emmy Award-winning actor Uzo Aduba, share what Apple calls “life-shaping moments” that were recorded while walking outside or at locations that mean something to them.

New episodes of Time To Walk will appear in Apple’s Workout app on the Apple Watch each Monday until the end of April. Episodes will run between 25 and 40 minutes. To use Time to Walk, you need to have AirPods or other Bluetooth headphones paired with an Apple Watch, though a Wi-Fi or cellular connection isn’t required as long as you’ve downloaded the episode ahead of time.

At least at the outset, Time To Walk sounds similar to a standard podcast. That said, the location the recording was made in could potentially make at least some episodes a little more interesting than they may initially sound.

Apple Fitness+ launched back in mid-December for $12.99 per month or $99 a year. Apple is currently offering a 3-month free trial of Fitness+

Every month, PlayStation offers a few games at no additional cost to those subscribed to its PlayStation Plus service.

Now, the company has revealed four games are hitting the service in March — one more than usual.

Most notably, Square Enix’s acclaimed Final Fantasy VII Remake will be free on PS Plus this month. However, it’s important to keep in mind that the PS Plus version of Remake is not eligible for the digital upgrade to the PS5 version of the game that was revealed earlier this week.

Outside of Remake, March’s other PS Plus offerings are the PS4 third-person survival action shooter Remnant: From the Ashes, PS5 first-person puzzler Maquette (making its debut right onto PS Plus, but only on PS5) and PlayStation VR shooter Farpoint.

All four games will be available to download from March 2nd to April 5th.

As a reminder, Destruction AllStars, which joined the PS Plus catalogue this month, also remains free to download until April 5th. Meanwhile, February’s other two games, Control: Ultimate Edition and Concrete Genie, are leaving the service on March 1st.

The Brant County Health Unit said Friday that COVID-19 mass immunization clinics will be located at Laurier Brantford’s One Market building at 1 Market St and and the Paris fairground at 139 Silver St.

The health unit said the sites will begin operating next week to vaccinate local residents aged 80 and older.

“We were overcome with offers from various community groups and organizations to use their space to host clinics,” said Jo Ann Tober, the health unit’s CEO. “Our community has come together so much over what has been a very challenging year and it was wonderful to see the generosity and spirit we’ve become accustomed to, continued throughout this process. These sites were chosen because their combination of space, logistics and location made them the best fit for mass immunization delivery in Brant.”

Information about booking is available at the health units website at www.bchu.org/COVID19Vaccines.

The health unit said the sites will run in conjunction with additional on-site and mobile clinics designed to vaccinate specific population groups. More information on this can be accessed by viewing Brant’s COVID-19 Vaccination Plan Overview on its website.

Genshin Impact has officially revealed a new character, Hu Tao, the 77th Director of the Wangsheng Funeral Parlor who is said to walk the line between life and death, “shouldering responsibilities unknown to most mortals.” Completing the reveal is not only a teaser trailer for the character but a few details about Hu Tao as well.

At the moment of publishing, not much is known about Hu Tao other than what’s mentioned above. That said, most characters that have spoken about Hu Tao, have provided a negative impression that paints the character as one that can not be trusted. In fact, a tweet from the game’s official Twitter account warns players to be careful around the character.

She walks the line between life and death, shouldering responsibilities unknown to most mortals.

Be careful around Hu Tao, lest she leads you by the nose!#GenshinImpact pic.twitter.com/rN8LpjybGd

SHES SO CUTE I LOVE YOU HU TAO!!! pic.twitter.com/7UEQFgg8LZ

Genshin Impact is available as a free-to-play game on PC, PS4, and mobile devices. The game is also playable on PS5 via backward compatibility, but right now this is the only way to play the game on PS5. Developer miHoYo has already confirmed the game is coming to PS5, and Nintendo Switch, but right now there’s been no word of when these versions will release.

For more coverage on Genshin Impact — including not just all of the latest news, but all of the latest rumors, reports, and leaks — click here. Meanwhile, as always, feel free to leave a comment or 53 letting us know what you think or, alternatively, hit me up on Twitter @Tyler_Fischer_ and let me know over there. What do you think of Hu Tao?