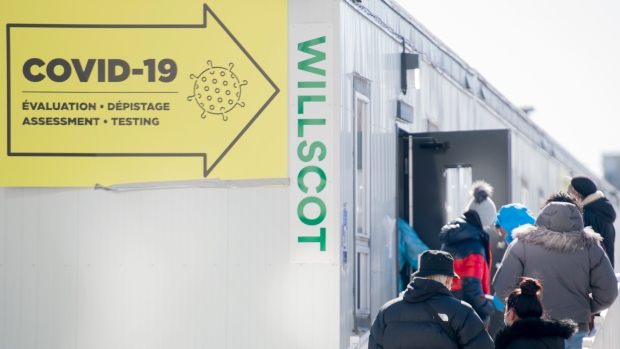 TORONTO —
Canada hit a grim milestone on Saturday when the country officially surpassed one million COVID-19 cases since the start of the pandemic.

The very first case of COVID-19 in Canada was confirmed at Toronto’s Sunnybrook Health Sciences Centre on Jan. 25.

A little more than a month later, on March 11, the World Health Organization declared a global pandemic with 126,000 confirmed cases worldwide. On that date, Canada recorded 108 total confirmed cases.

Now, Canada is in the midst of a third wave or surge in new infections in several of the most populous provinces, including Ontario, Quebec, and British Columbia.

Ontario reported 3,009 cases of COVID-19 on Saturday and 3,089 on Friday, marking the first time the province topped 3,000 cases since January. On Saturday at 12:00 a.m., the province implemented a month-long emergency shutdown of personal services and in-person dining while imposing tighter capacity limits on both essential and non-essential businesses.

Quebec topped over 1,300 COVID-19 cases for the first time since January on Friday, and reported 1,282 new cases of COVID-19 on Saturday. As a result, the province said it will be increasing police presence to ensure holiday weekend gathering restrictions are respected.

B.C. hit another record-setting case count with 1,018 COVID-19 infections on Friday and 1,072 on Saturday, bringing the province’s total confirmed number of cases to 102,970 since the beginning of the pandemic. On Monday, the province tightened restrictions for the first time since November, implementing a three-week “circuit breaker” which includes banning indoor dining and personal care services in certain regions.

In response to the rising number of cases, each of the provinces have enacted stricter public health measures in an effort to quell the tide of the third wave.

Ontario, which has the highest number of COVID-19 cases, was forced into a provincewide “emergency brake” shutdown for a month following ominous modelling data that showed that case counts could reach 6,000 a day by the end of April.

In Quebec, three regions, including the provincial capital, have been put under a 10-day lockdown, with schools and non-essential businesses closed, until April 12.

On March 29, British Columbia announced the introduction of a three-week long “circuit breaker” with new restrictions after the province set a single-day record of 936 new cases the weekend before.

In addition to tightening restrictions on businesses and gatherings, the provinces have been scrambling to vaccinate as many residents as they can as case counts rise.

By Rod Nickel and Maiya Keidan

Nutrien, the world’s biggest fertilizer producer by capacity, surprised shareholders on Sunday by promoting its chairman, Mayo Schmidt, to CEO, replacing Chuck Magro, who had led the company since it formed from Agrium’s 2018 merger with Potash Corp.

Schmidt, raised on a Kansas farm, is best known for leading the Saskatchewan Wheat Pool grain cooperative’s acquisition of competitor Agricore United in 2007, creating Viterra Inc, one of Canada‘s biggest grain handlers. He subsequently bought Australia’s ABB Grain before leading the sale of Viterra to commodity trader Glencore PLC in 2012.

“Acceleration of M&A is a natural progression as we enter the next commodity supercycle,” said Michael Underhill, chief investment officer at Capital Innovations LLC, which owns Nutrien shares. “I would not bet against him.”

Nutrien shares were down 1.3% on Tuesday, after falling 3.5% on Monday. They have risen about 35% year over year, riding soaring corn prices, but gained only 2% since they began trading in 2018.

Some investors had grown uncertain about Nutrien’s growth strategy under Magro, said Mike Archibald, vice-president and portfolio manager at AGF Investments, which owns C$136 million ($109 million) worth of the company’s stock.

“The incoming CEO does have a history as a deal-maker so, to the extent he lives up to what he’s done in the past, we should expect sometime in the next 12 months that we’ll get something happening on the M&A front,” Archibald said.

Nutrien could try to acquire U.S. nitrogen fertilizer rival CF Industries, which has a $10-billion market capitalization, or accelerate the company’s roll-up of smaller farm retail stores, Archibald said. A CF spokesman did not immediately respond to a request for comment.

Conversely, Schmidt could sell off the retail business to focus on fertilizer production, Archibald said.

Schmidt may also eye selling Nutrien’s phosphate fertilizer business, even though it recently got a boost from U.S. duties against Russian and Moroccan imports, said Brian Madden, senior vice-president at Goodreid Investment Counsel, a Nutrien shareholder.

The CEO change is positive, as Schmidt has an exceptional record of creating shareholder value, said Scotiabank analyst Ben Isaacson. He added that Nutrien could look to consolidate the nitrogen industry.

Schmidt would find it difficult to sell Nutrien itself, Madden said. There is no obvious domestic acquirer and the Canadian government rejected a foreign bid for Potash Corp in 2010.

“Schmidt has got cred in the ag world,” Madden said. But he added that abruptly changing chief executives is not how successions should occur at large companies.

(Reporting by Rod Nickel in Winnipeg and Maiya Keidan in Toronto; Editing by Marguerita Choy)