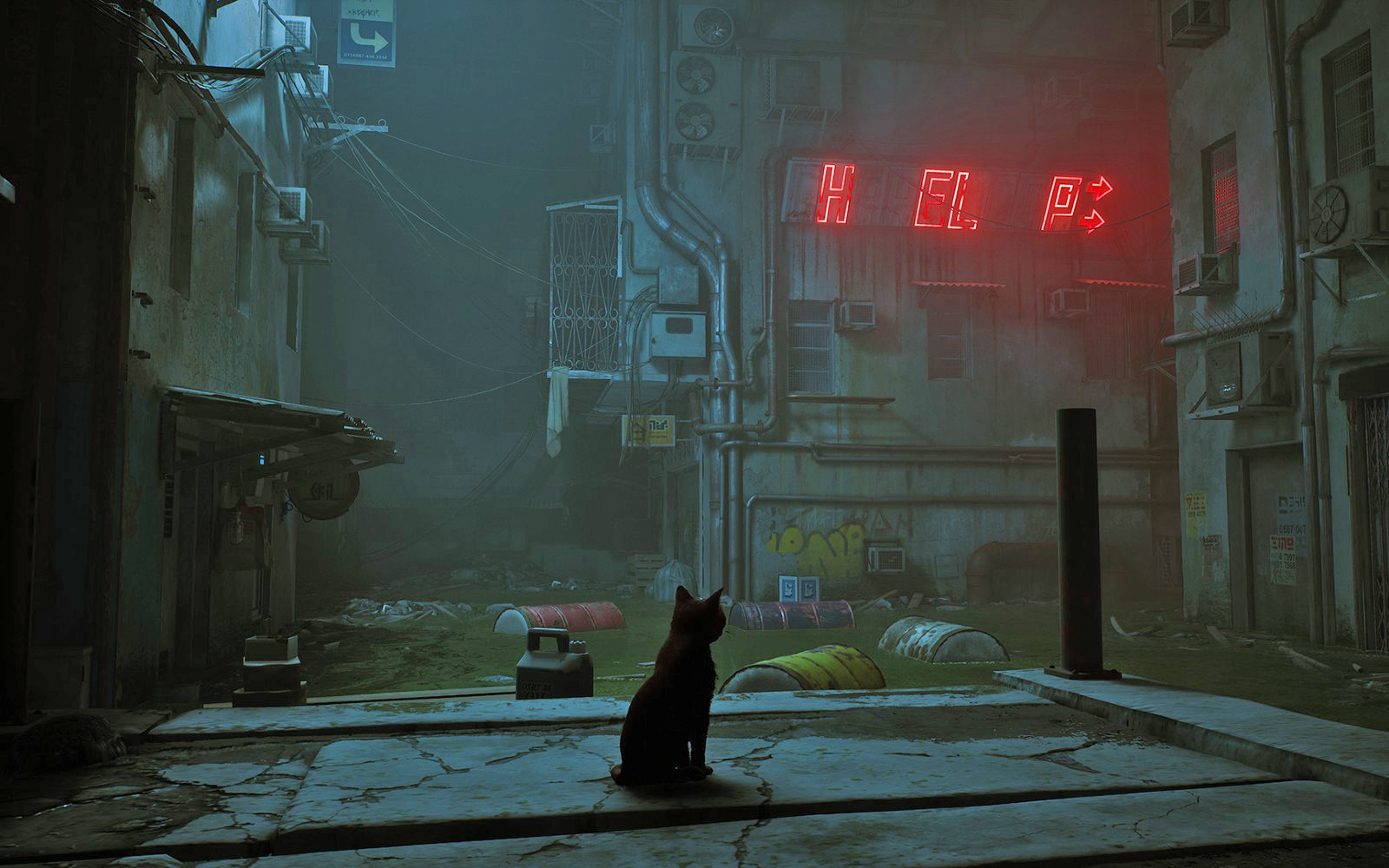 The last time we saw Stray was in the form of a cinematic trailer Sony shared in 2020 that highlighted the game’s futuristic neon-soaked setting and adorable feline protagonist. At the time, we didn’t get to see the game in action, a fact that Annapurna Interactive has now remedied. The publisher shared a slice of gameplay footage from the title during its recent showcase and said it would release Stray sometime in early 2022.

In the opening moments of Stray, our feline protagonist finds himself injured and separated from his family. Gameplay involves using his physical abilities as a cat to navigate the environment and solve puzzles. In the time-honored tradition of duos like Ratchet and Clank, partway through the adventure, you’ll meet a drone named B-12. They will allow you to converse with the city’s other robotic inhabitants and interact with certain objects in the environment. The cat has a playful side to his personality, and you can do things like scratch furniture, interact with vending machines and rub up against the legs of the robots you meet. Good stuff.

When Stray comes out next year, it will be available on PlayStation 4, PS5 and PC. Developer BlueTwelve Studio promised to show off more of the game before then.

Brian Goetz, Java language architect at Oracle, recently updated JEP Draft 828039, Classfile API, to provide background information on how this draft will evolve and ultimately replace the Java bytecode manipulation and analysis framework, ASM, that Goetz characterizes as “an old codebase with plenty of legacy baggage.” This JEP proposes to provide an API for parsing, generating, and transforming Java class files. This JEP will initially serve as an internal replacement for ASM in the JDK with plans to have it opened as a public API.

Build 28 of the JDK 19 early-access builds was made available this past week, featuring updates from Build 27 that include fixes to various issues. More details may be found in the release notes.

Build 3 of the JDK 20 early-access builds was also made available this past week, featuring updates from Build 2 that includes fixes to various issues. Release notes are not yet available.

For JDK 19 and JDK 20, developers are encouraged to report bugs via the Java Bug Database.

Spring Boot 2.6.9 has been released featuring 44 bug fixes, improvements in documentation and dependency upgrades similar to Spring Boot 2.7.1. Further details on this release may be found in the release notes.

Spring Data versions 2021.2.1 and 2021.1.5 have been released featuring upgrades to all of the Spring Data sub projects such as: Spring Data MongoDB, Spring Data Cassandra, Spring Data JDBC and Spring Data Commons. These releases will also be consumed by Spring Boot 2.7.1 and 2.6.9, respectively, and address the aforementioned CVE-2022-22980.

Spring Authorization Server 0.3.1 has been released featuring some enhancements and bug fixes. However, the team decided to downgrade from JDK 11 to JDK 8 to maintain compatibility and consistency with Spring Framework, Spring Security 5.x and Spring Boot 2.x. As a result, the HyperSQL (HSQLDB) dependency was also downgraded to version 2.5.2 because HSQLDB 2.6.0 and above require JDK 11. More details on this release may be found in the release notes.

Spring Security versions 5.7.2 and 5.6.6 have been released featuring bug fixes and dependency upgrades. Both versions share a new feature in which testing examples have been updated to use JUnit Jupiter, an integral part of JUnit 5. Further details on these releases may be found in the release notes for version 5.7.2 and version 5.6.6.

On the road to GlassFish 7.0.0, the sixth milestone release was made available by the Eclipse Foundation that delivers a number of changes related to passing the Technology Compatibility Kit (TCK) for the Jakarta Contexts and Dependency Injection 4.0 and Jakarta Concurrency 3.0 specifications. However, this milestone release has not yet passed the full Jakarta EE 10 TCK. GlassFish 7.0.0-M6, considered a beta release, compiles and runs on JDK 11 through JDK 18. More details on this release may be found in the release notes.

On the road to version 1.0, Oracle Labs has released version 0.9.12 of Native Build Tools, a GraalVM project consisting of plugins for interoperability with GraalVM Native Image. This latest release provides: support documentation for Mockito and Byte Buddy; prevent builds from failing if no test list has been provided; support different agent modes in the native-image Gradle plugin, a breaking change; and support for JVM Reachability Metadata in Maven. Further details on this release may be found in the release notes.

The Micronaut Foundation has released Micronaut 3.5.2 featuring bug fixes and point releases of the Micronaut Oracle Cloud 2.1.4, Micronaut Email 1.2.3, and Micronaut Spring 4.1.1 projects. Documentation for the ApplicationContextConfigurer interface was also updated to include a recommendation on how to define a default Micronaut environment. More details on this release may be found in the release notes.

Maintaining alignment with Quarkus, The Apache Software Foundation has released Camel Quarkus 2.10.0 containing Camel 3.17.0 and Quarkus 2.10.0.Final. New features include: new extensions, Azure Key Vault and DataSonnet; and removal of deprecated extensions in Camel 3.17.0. Further details on this release may be found in the list of issues.

The Apache Tika team has released version 2.4.1 of their metadata extraction toolkit. Formerly a subproject of Apache Lucene, this latest version ships with improved customization and configuration such as: add a stop() method to the TikaServerCli class so that it can be executed with Apache Commons Daemon; allow pass-through of Content-Length header to metadata in the TikaResource class; and support for users to expand system properties from the forking process into forked tika-server processes.

Apache Tika 1.28.4 was also released featuring security fixes and dependency upgrades. More details in this release may be found in the changelog. The 1.x release train will reach end-of-life on September 30, 2022.

iQOO will debut the Dimensity 9000 Plus processor in the upcoming 10-series flagship smartphones – Notebookcheck.net