Canada’s total coronavirus case count went up by 370 Thursday and its deaths by 12.

Six new deaths were also reported, though four of them occurred before July 1. There have now been 5,609 deaths due to the virus in the province.

There are currently 308 people hospitalized in the province, down 23 from Wednesday, and 27 are in intensive care.

Ontario reported 170 new cases on Thursday, with 86 of them originating in the Windsor-Essex region as the province targets temporary farmworkers for testing.


0:33
Coronavirus: Federal health officials say ‘limit or no transmission’ of COVID-19 in most parts of Canada

Coronavirus: Federal health officials say ‘limit or no transmission’ of COVID-19 in most parts of Canada

The province now has 36,348 cases total with 31,977 of them recovered, or 88 per cent. Overall, the new daily infection numbers have been on the decline over the past several weeks.

There are currently 123 patients hospitalized, with 31 of them in intensive care (down by four the previous day) and 23 patients on a ventilator (down by three).

Ontario has seen 2,703 deaths after three more were reported Thursday.

In Alberta, meanwhile, three new deaths were announced Thursday, all linked to a coronavirus outbreak at Edmonton’s Misericordia Hospital.

The deaths bring the total number of COVID-19 fatalities in the province to 161, while 37 new COVID-19 cases have been confirmed in the province over the past 24 hours. Currently, there are 584 active cases in Alberta.

British Columbia reported 20 new cases Thursday, bringing its total to 3,028, nine of which were not tested but are considered epidemiologically-linked.

More than 88 per cent of those patients have fully recovered, while 175 cases remain active.

Seventeen of those cases are in hospital, four of them in critical care.

In Saskatchewan, five new cases were added to bring its total to 813, while 750 of them have recovered, up by four from yesterday.

There have been 15 COVID-19-related deaths in the province.

There are currently 48 active cases in the province, health officials said. Active cases are total cases less recoveries and deaths.

For the ninth straight day, no new COVID-19 cases were reported in Manitoba, keeping its total cases to 325 — 11 of which are presumptive cases — with four active cases. Seven Manitobans have died.

New Brunswick reported one new case of the coronavirus on Thursday in the Fredericton region, and said it was a travel-related case and the individual is self-isolating.

The province said the number of confirmed cases in New Brunswick is 166 and 163 people have recovered. There have been two deaths, and there is one active case.

No new cases or deaths were announced in the rest of the Atlantic or Canada’s territories. 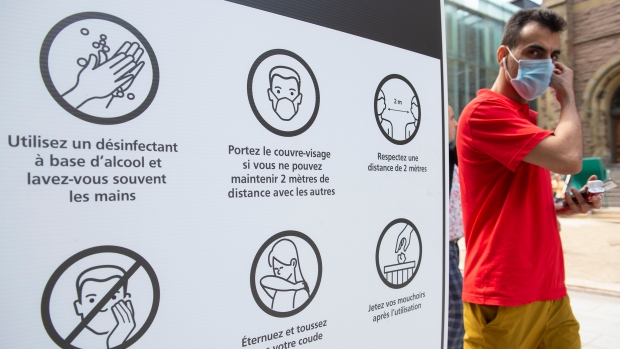 MONTREAL —
At a minute past midnight Sunday, more COVID-19 restrictions in Quebec were lifted including how late bars and restaurants could serve alcohol and festival capacities.

Bars and restaurants are now permitted to serve alcohol until 1 a.m. with closing time pushed to 2 a.m.

Ten people or three private residences can share a table and tables must remain two metres apart indoors when there are no partitions between them. Outdoor terrasses can seat 20 per table, and those tables must be a metre apart.

In indoor auditoriums and stadiums, the capacity is now 7,500 people with assigned seating (with one empty seat between people from different households), with sections divided into a maximum of 250 people per section. Mask-wearing is still mandatory inside while not seated.

For outdoor festivals, 15,000 people are now permitted to attend in pre-assigned seats or standing in 500-people sections. Two-metre distancing is required, and mask-wearing is recommended by public health when people are circulating. A monitor is required to keep an eye on all participants. For complete rules on festivals and events, visit the Quebec public health site.

The sports community was quick to respond.

In soccer, CF Montreal announced that it will be able to receive fans in all sections of Saputo Stadium (in compliance with physical distance rules) as of next Wednesday, Aug. 4, during its game against Atlanta United.

The CFL’s Montreal Alouettes play its first game in Montreal on Aug. 27 against the Hamilton Tiger Cats.

The team said it was “extremely happy” with the new relaxations.

The Alouettes announced that individual tickets will be sold to the general public starting Monday morning.

Tennis Canada said that the National Bank Open, which will be held from Aug. 7 to 15 at the IGA Stadium, is maintaining a maximum capacity of 5,000 spectators per match in Montreal. The centre court can usually accommodate up to 12,000 people.

Canada’s Chief Public Health Officer, Dr. Theresa Tam, released modelling on Friday that indicates cases are beginning to rise as a result of the more contagious Delta variant, but there is still time to flatten the curve.

Epidemiologist Dr. Christopher Labos said the number one way to protect against a Delta-driven fourth wave of COVID-19 is to convince Quebecers who have yet to get a vaccine to do so immediately.

“If you’re not vaccinated, keep your distance from other people,” he said. “The problem with COVID is not just that it’s infectious, but that a significant portion of the people who get it get seriously ill and end up in hospital.” Earlier this month, Canada announced a major change to its rules for access to information and privacy (ATIP) in the Canada Gazette.

The change is simple, but the impacts are profound. The Canadian government is going to allow anyone to make an ATIP request under the Privacy Act. This new policy will bring Canada into line with global standards on ATIP. It will also vastly expand the rights of non-Canadians.

Laws such as the Privacy Act allow people to make ATIP requests to the federal government. Immigration, Refugees, and Citizenship Canada (IRCC) is a federal agency, so it is subject to the Privacy Act.

Currently, there are limitations on who can make an ATIP request through the Privacy Act. One of the items limits the right of access to two groups:

This limitation means that non-Canadians who are outside of Canada cannot make requests under the Privacy Act. There is a way to get around this rule. An ineligible person can get someone who is eligible to make a request on their behalf. However, this process can be expensive and time-consuming.

Having the ability to make an ATIP request to IRCC can be very helpful. For example, an ATIP request can allow a person to access their Global Case Management System (GCMS) notes. These are the detailed records of a person’s immigration case. They will explain IRCC staff’s thinking and decision-making. They can help a person understand why IRCC has decided the way it has. This knowledge, in turn, can also help the person challenge the IRCC decision. For example, the person could show the officer ignored or mis-interpreted something.

IRCC is a popular target for ATIP requests. In fact, there are more ATIP requests for IRCC than there are for any other federal government department combined.

Because this change is so important, IRCC expects it will need time to make sure it goes smoothly. For example, IRCC will have to change forms and processes. It will also likely have to deal with a much greater number of requests. For this reason, the government is delaying when the new rule takes effect. Per the Canada Gazette, the Canadian government changed the Extension Order on July 14, 2021. However, the Gazette also noted that the change takes effect on its first anniversary. This means that on July 14, 2022, the new rule will come into force.

The new rule is a major step forward for non-Canadians. There is a delay in effect. This delay, itself, is because the change is so large and important.

While you were sleeping: How Canada performed at Tokyo Olympics Friday, Saturday – Global News

Canada won its latest swimming medal at the Tokyo Olympics Saturday, while athletes managed to advance to future rounds in multiple track and field events.

Here’s what you may have missed from the day’s events.

Read more:
Olympics medal count: Here’s who won the most medals during the Tokyo Games

Taylor Ruck, also swimming for Canada in the backstroke, managed a sixth-place finish.

On the men’s side, Brent Hayden tied for fourth in the 50-metre freestyle semifinal with Russia’s Kliment Kolesnikov — and tied his personal best time — but it wasn’t enough to the final.

Sage Watson made it through to Monday’s semifinal of the women’s 400-metre hurdles after finishing fourth in her heat. Noelle Montcalm wasn’t so lucky, placing sixth, although she managed a new season best performance.

Marco Arop won his heat in the men’s 800-metres, sending him to the semifinals on Sunday. Brandon McBride won’t join him after finishing sixth in his heat.

Fellow Canadians Gavin Smellie and Bismark Boateng failed to qualify for the semifinal, however, after both finishing eighth in their respective heats.

Jennifer Abel finished third in the women’s three-metre springboard semifinal, guaranteeing her a spot in the final on Sunday. Abel will be seeking her first medal in the event after finishing fourth at the 2016 Games in Rio.

Pamela Ware, who had been ranking just behind Abel in the first four rounds of the semifinal, fell to 18th place after failing her fifth dive and did not qualify for the final.

The women’s team defeated Kenya 24-10 in its final match of the Games, securing a ninth-place finish in the overall rankings.

Mackenzie Hughes and Corey Conners both bumped themselves up to a tied 17th-place finish after the third round of play, which started for both men at the 10th hole.

Hughes finished with a score of 65, while Conners scored 66.

The men’s 49er skiff team of William Jones and Evan DePaul placed 13th in their first race of the day, 18th in the second and PLACE in the third, ending their run at the Games.

Alexandra Ten Hove and Mariah Millen’s final three races in the women’s 49er FX skiff event saw the team place 13h in the first and 17th in the second and third.

Tammara Thibeault lost all five of her rounds in the women’s middleweight quarterfinal to Nouchka Fontijn of the Netherlands, ending her run at the Games.

Crispin Duenas was defeated by Germany’s Florian Unruh 6-2 in the men’s individual elimination round — the last round of play before the quarterfinal.

Colleen Loach and her horse Qorry Blue D’Argouges finished 42nd in third session of the team and individual dressage event.