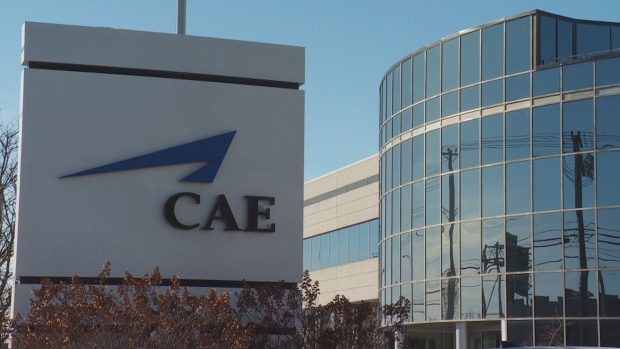 TORONTO —
A company that has made a name for itself developing flight simulators is now helping to keep people safe in more ways than one.

Canadian Aviation Electronics (CAE) has partnered with PYURE to assemble air sanitizers to help reduce the spread of COVID-19.

The Montreal-based company expects to produce 55,000 units this year, which will be used in hospitals, doctors’ and dentists’ offices, among other companies and schools in the United States, according to a press release.

“The reality is we have the facility, we have the expertise, we have the machinery to make it happen so for us, it is continuing in that level,” said Grenier.

Unlike an air purifier, CAE’s air sanitizer replicates the way sunlight sanitizes the outdoor environment by safely generating and diffusing hydroxyls and organic oxidants indoors. The technology’s sanitization products and solutions don’t only purify the air, they also clean it.

“The technology is at a very high level to recreate what happens every day outdoors in the sun and has the cleansing effect of the sun indoors,” said PYURE chief executive officer, Jean Francois Huc.

The Canadian aviation company has been in business since 1946, according to its website. Among manufacturing flight simulators, CAE also works in the areas of defence, security and healthcare.

“CAE is a company that sells safety, we are in the safety area, the air sanitizer is all about the safety for the people,” said Grenier.

In 2020, CAE was awarded a contract from the Canadian government to manufacture 60,000 ventilators for hospitals across the country, however the company’s contract expired in January leaving 500 employees jobless.

Since then, more than 100 employees have returned to work.

“This is work we can actually do and at the same time, we can fight this virus and other viruses that may come afterward, so we are pretty excited,” said Sophie Albert, a union representative for CAE.

The ruling, which cannot be appealed, means the 12 men could face execution pending approval by President Abdel Fattah al-Sisi. They include Abdul Rahman Al-Bar, commonly described as the group’s mufti or top religious scholar, Mohamed El-Beltagi, a former member of parliament, and Osama Yassin, a former minister.

Many Muslim Brotherhood figures have been sentenced to death in other cases related to the unrest that followed the military’s ousting of Brotherhood president Mohamed Mursi in 2013, but the Court of Cassation ordered retrials.

Rights groups have documented a sharp rise in the number of executions in Egypt, with at least 51 carried out so far this year according to Amnesty International.

“Instead of continuing to escalate their use of the death penalty by upholding death sentences following convictions in grossly unfair mass trials Egyptian authorities must immediately establish an official moratorium on executions,” Amnesty said in a statement.

Monday’s ruling relates to a mass trial of hundreds of suspects accused of murder and incitement of violence during pro-Brotherhood protests at Rabaa al-Adawiya square in Cairo in the weeks after Mursi’s overthrow.

In September 2018, an Egyptian criminal court sentenced 75 people to death and issued varying jail terms for more than 600 others. Many defendants were tried in absentia.

Forty-four of those sentenced to death appealed to the Court of Cassation. Thirty-one had their sentences changed to life in prison, while death sentences were upheld for 12 others.

The court also upheld jail terms for many other defendants including a life sentence for Mohamed Badie, leader of the outlawed Brotherhood, and a 10-year jail term for Mursi’s son Osama, the judicial sources said.

Trudeau says he discussed border with Biden, but no deal

Prime Minister Justin Trudeau said on Sunday he has spoken with U.S. President Joe Biden about how to lift pandemic-related border restrictions between the two countries but made clear no breakthrough has been achieved.

U.S. and Canadian business leaders have voiced increasing concern about the ban on non-essential travel in light of COVID-19 that was first imposed in March 2020 and renewed on a monthly basis since then. The border measures do not affect trade flows.

The border restrictions have choked off tourism between the two countries. Canadian businesses, especially airlines and those that depend on tourism, have been lobbying the Liberal government to relax the restrictions.

Trudeau, speaking after a Group of Seven summit in Britain, said he had talked to Biden “about coordinating measures at our borders as both our countries move ahead with mass vaccination.” Canada is resisting calls for the border measures to be relaxed, citing the need for more people to be vaccinated.

The United States is ahead of Canada in terms of vaccination totals.

“We will continue to work closely together on moving forward in the right way but each of us always will put at the forefront the interests and the safety of our own citizens,” Trudeau told a televised news conference when asked the Biden conversation.

“Many countries, like Canada, continue to say that now is not the time to travel,” Trudeau added, though he said it is important to get back to normalcy as quickly as possible.

(Reporting by David Ljunggren in Ottawa; Editing by Will Dunham)

Man with 39 wive dies in India

A 76-year-old man who had 39 wives and 94 children and was said to be the head of the world’s largest family has died in north east India, the chief minister of his home state said.

Ziona Chana, the head of a local Christian sect that allows polygamy, died on Sunday, Zoramthanga, the chief minister of Mizoram and who goes by one name, said in a tweet.

With a total of 167 members, the family is the world’s largest, according to local media, although this depends on whether you count the grandchildren, of whom Ziona has 33.

Winston Blackmore, the head of a polygamous Mormon sect in Canada, has around 150 children from 27 wives – 178 people in total.

Ziona lived with his family in a vast, four-story pink structure with around 100 rooms in Baktawng, a remote village in Mizoram that became a tourist attraction as a result, according to Zoramthanga.

The sect, named “Chana”, was founded by Ziona’s father in 1942 and has a membership of hundreds of families. Ziona married his first wife when he was 17, and claimed he once married ten wives in a single year.

They shared a dormitory near his private bedroom, and locals said he liked to have seven or eight of them by his side at all times.

Despite his family’s huge size, Ziona told Reuters in a 2011 interview he wanted to grow it even further.

“I am ready to expand my family and willing to go to any extent to marry,” he said.

“I have so many people to care for and look after, and I consider myself a lucky man.”