Henry said there are some Moderna vaccines arriving next week, but would be less than promised

At its current clip, B.C. will run out of the COVID-19 vaccine by Monday.

On Wednesday, provincial health officer Dr. Bonnie Henry reported 4,260 immunizations, bringing the average for the past five days to about 2,500 a day.

Before supplies of Pfizer and Moderna vaccines began to dry up in late January, there were around 5,000 immunizations a day in B.C., with a peak of over 7,000.

Henry said some Moderna vaccine doses are arriving next week, but fewer than expected. Pfizer has promised Health Canada it will deliver 403,000 doses by the end of this week, and then half a million a week for six weeks after that.

Based on population, B.C. should get around 55,000 doses of Pfizer vaccine next week, as it is distributed by Health Canada.

“I think what you are going to see is the story on vaccinations is still being written,” the federal procurement minister, Anita Anand, told a Canadian Chamber of Commerce event on Wednesday. “Canada is going to see a very, very steep incline (in vaccination deliveries) in the next weeks and months ahead.”

Moderna has promised Canada 1.5 million doses by the end of March, with around 200,000 of those for B.C.

There are 4,150 active cases of the disease, of which 232 are in hospital including 63 in intensive care. Those numbers are fairly steady.

There are 7,238 people in self-isolation after being exposed to the disease.

There have been no new outbreaks in long-term care or acute care facilities, and two were declared over, leaving 19 active outbreaks in health-care settings.

Most residents and staff at B.C.’s long-term care facilities have been vaccinated, and vaccines are now being offered to critical health-care workers and as second doses.

On Wednesday, Toronto’s top doctor said she has never been as worried about the future of the pandemic as she is today — after 56 cases of COVID-19 variants of concern in the city.

B.C. has reported 60 cases of variants of concern.

There are four variants circulating that the World Health Organization considers to be of concern: P1, B117, B1351 and B1525. B.C. has reported cases of all but the P1 — which was identified in Brazil.

Greater Toronto has a larger population than B.C. by almost one million people.

A third potential vaccine, made by AstraZeneca, has been approved by the World Health Organization and is under review in Canada. The Canadian government has a deal with AstraZeneca to get 500,000 doses in March if the vaccine gets Health Canada approval. That vaccine is used heavily in the U.K.

The Johnson & Johnson vaccine is also subject to Health Canada review but has not been approved anywhere in the world.

— With files from Canadian Press 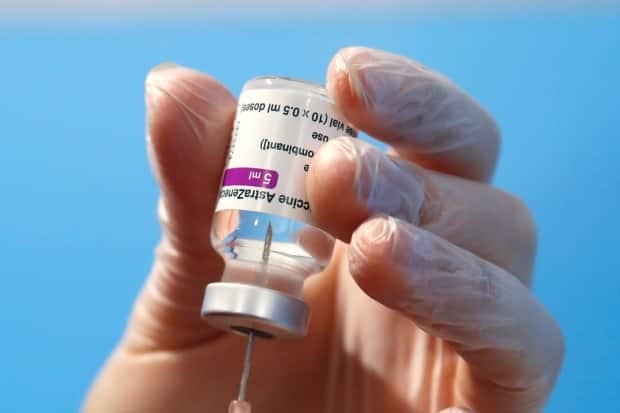 The Johnson & Johnson vaccine is the newest to be approved by Health Canada, which unlike the others, requires just a single dose.

Canada has pre-purchased 10 million doses, and has options to buy another 28 million doses. Additionally, the country is expected to receive 12.8 million doses between April to June, from Pfizer alone.

From a logistical standpoint, this could imply faster vaccination across all provinces.

The Manitoba government has already announced that it’s possible everyone in the province 18 and older who wants to get a COVID-19 vaccination may have the chance to do so by May 18.

The numbers for Manitoba, released in a technical briefing to the media Friday, say if vaccine supplies are steady, it will move up first-dose vaccinations by months.

Some 18,000 doses of the newly-approved Oxford-AstraZeneca COVID-19 vaccine are expected to arrive in the province next week, and will immediately be distributed to eligible clinics and pharmacies, Dr. Joss Reimer, medical lead of the province’s vaccine task force, said Friday.

“We’re very confident in the data that we’ve seen so far regarding the effectiveness in the real world of the first dose,” Reimer said.

Federal authorities said Friday that the four vaccines that have been approved in Canada may have different efficacy rates, but data shows they all are safe and can prevent severe illness and impact hospitalization from COVID-19.

The Ontario government too has declared that it is now looking to have all eligible residents who wish to get a vaccine, have their first shot completed by June 20.

“We’ve had a seismic shift in our vaccination opportunities and the program to roll it out,” said retired general Rick Hillier, the head of the province’s vaccine task force.

The recent approval of the AstraZeneca and Johnson & Johnson vaccines and the extended gap between first and second doses will allow the province to “crush those timelines really tightly.”

“Our aim would be to allow the province of Ontario to have a first needle in the arm of every eligible person who wants it by the first day of summer,” Hillier said. “Please be patient a little while longer.”

The province is currently nearing the end of Phase 1, in which those living in long-term care homes, retirement homes, as well as staff and front-line workers were targeted.

More than 820,000 doses have been administered and at least 269,000 Ontarians have been fully immunized with two shots.

Earlier this week, Canada’s National Advisory Committee on Immunization (NACI) recommended that provinces and territories extend the interval between first and second COVID-19 vaccine doses up to four months.

“Extending the dose interval to four months allows NACI to create opportunities for protection of the entire adult population within a short timeframe,” the committee said.

Following the advisory, Nova Scotia Premier Iain Rankin announced that everyone in the province could get their first shot of the COVID-19 vaccine by the end of June.

British Columbia too, is expecting all adults in the province to have the option to receive their first dose before the end of July.

Provincial health officer Dr. Bonnie Henry announced Monday that the gap between the first and second doses of the vaccine will be extended to 112 days.

Efficacy studies of the vaccine have shown that receiving a first shot of the vaccine is more than 90 per cent effective for at least a few months, Henry said.

“That is why I am so confident that the decision we made, over this weekend, to extend that interval is the best one based on all of the science and the data that we have to maximize the benefit to everybody in our community here in B.C.,” Henry added.

Saskatchewan Premier Scott Moe also said Thursday that the prairie province would also follow suit and extend the gap between doses. Other provinces, such as Alberta, Newfoundland and Labrador have suggested they plan to do the same.

— With files from The Canadian Press and Global News

As of Friday, 282,674 doses of COVID vaccine have been administered in the province, with 90,824 Albertans fully immunized (two doses). More details on the province’s vaccine program and distribution can be found here.

Below is a breakdown of cases per regional health zone in Alberta:

Below is a graph illustrating how COVID-19 cases have trended since the start of the pandemic. More details can be found here.

The province reported 36 cases of COVID variants, bringing the total of variant cases in Alberta to 599. None of those cases are currently in the South Zone.

The next live update from the province will be on Monday, March 8.