REGINA —
A Regina woman has curated an outdoor art gallery along her fence in downtown Regina as a way of sprucing up the neighbourhood.

Heather Cameron has been creating the Alley Galley for three years. This year, the project is titled Alley Elixir. It’s located in an alley off of Toronto St.

“It just takes a space that is normally a transitional space, maybe even sometimes a bit of an ugly space, and just frames it differently,” Cameron said.

The art comes from about 20 young artists between the ages of two and 15.

Those questions helped the artists create their work. 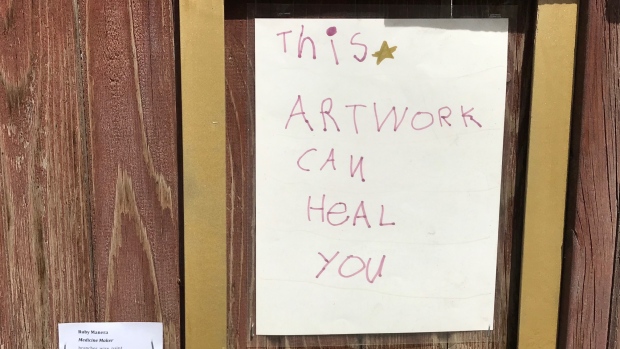 Cameron’s son, Oliver, was the inspiration behind the entire project. She used to hang his kindergarten art work along their fence, and after neighbours gave their feedback, she reached out to more artists.

“It just sort of took off from his art,” she said. “I know quite a lot of the kids in the neighbourhood so it just seemed like a fun way to diversify the production.”

Cameron said throughout the COVID-19 pandemic, people have been gathering – at a safe distance – to observe the display.

“We have some fans,” she said with a laugh. “We have a few people that come by like two or three times a day.” 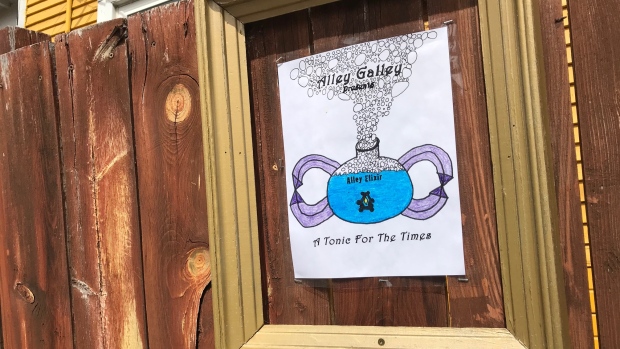 Cameron said the exhibits are typically set up for about a year, or until she’s hit with some new inspiration.

Art is a bittersweet process that connects past, present and future – Impartial Reporter

You can now cruise the halls of Kelowna’s Art Gallery for free for the month of June.

On June 2, all four exhibition spaces reopened for visitors to enjoy. In celebration, the gallery decided to offer free administration to everyone this month.

“I am delighted that our professional team worked together to reopen the Kelowna Art Gallery to the public as quickly and as safely as possible,” said Nataley Nagy, executive director at the Gallery.

“During these trying times, we know that art and creativity are a welcome respite for all of our residents.”

Visitors will notice additional signage as well as reduced capacity due to COVID-19 concerns.

The first hour, 10 a.m. to 11 a.m., has been set aside for seniors and for those who may have health concerns.

For more information about the exhibitions on view and to find out “what to know before your visit”, please see www.kelownaartgallery.com.

The Kelowna Art Gallery is located at 1315 Water Street in the heart of the Cultural District in downtown Kelowna, BC.

A drive-by art exhibition, planned in select cities across the United States, Mexico and Canada, is happening in Victoria on Saturday.

On June 6, artists taking part in The National Arts Drive will be displaying, performing or showcasing their creativity from driveways, balconies, windows, stoops and front lawns during a three-hour period.

Spectators are encouraged to drive the city blocks to see, hear and support the artists, performers, musicians and designers who live in their communities.

The driving experience is paired with a website and an interactive map where spectators can engage with the artist and support them through three main avenues: like, follow and share their work through social media, donate directly to the artists and visit their online store or website for a future purchase.

There is no charge for artists wishing to participate in the event, which was created by RAW – the world’s largest independent arts organization.

The charity auction will take place on Heffel’s Online Auction Partnerships (HO2) platform from June 9 – 23, 2020, and will include 28 works donated by Nicholas Metivier Gallery and a group of well-known artists including Edward Burtynsky, Bobbie Burgers, John Hartman and others. According to presale estimates for the works, the auction is expected to raise between $170,000 and $230,000 to benefit the charities.

“Like many Canadians, we are proud to step up to help those in need during this critical time,” said David Heffel, President of Heffel Fine Art Auction House. “We’re so thankful for the generosity of the Nicholas Metivier Gallery, the RBC Foundation and the artists who have donated their energy and creativity for this important cause, and are eager to get these much-needed funds to food banks in our communities.”

“Canadian food banks are in desperate need of assistance to help those most vulnerable as a result of COVID-19, and demand has grown exponentially in recent months,” said Nicholas Metivier, Founder and Owner of Nicholas Metivier Gallery. “When we suggested the idea of an auction to support food banks, our artists responded with tremendous generosity and enthusiasm. We are also pleased to partner with Heffel and utilize their online auction platform to execute this important initiative.”

To give interested buyers an opportunity to view the available works, the auction catalogue and virtual auction previews will be available on Heffel’s website. Works will also be available for preview by appointment at Nicholas Metivier Gallery (190 Richmond St E, Toronto, ON).

For additional auction details, and to access the online catalogue, please visit www.heffel.com. The catalogue will be available on June 9, 2020.

Heffel has sold more Canadian art than any other auctioneer worldwide, with sales totaling more than half a billion dollars since 1978. With offices in Toronto, Vancouver, Montreal, Ottawa and Calgary, Heffel has the most experienced team of fine art specialists in Canada and provides superior client service to both sellers and buyers internationally.

The Nicholas Metivier Gallery, founded in 2004, is one of the largest contemporary galleries in Canada. The gallery represents and promotes Canadian and international artists that demonstrate exceptional quality and originality in all media, with a focus on contemporary painting and photography.