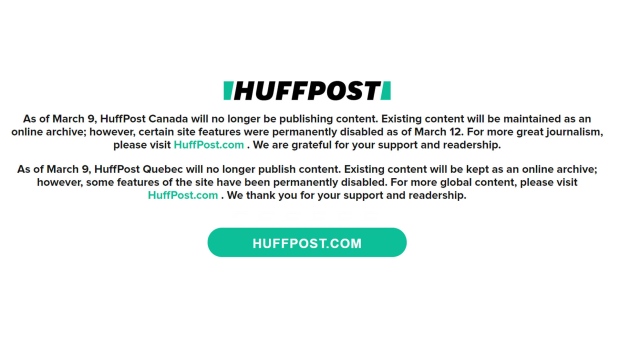 TORONTO —
BuzzFeed is closing HuffPost Canada’s operations and laying off 23 workers as part of a broad restructuring plan for the company, the U.S. digital media company said Tuesday.

The decision follows the recent completion of BuzzFeed’s deal to buy HuffPost from wireless giant Verizon.

BuzzFeed says in a statement it is also laying off 47 HuffPost employees in the U.S. and beginning consultations in Australia and the U.K. to propose “slimming operations” in both places.

The New York-based company said the restructuring of HuffPost is not a short-term cost-cutting exercise.

“We are shifting to a model that will enable HuffPost to break even this year and eventually be profitable, and that requires both cost management through restructuring, along with revenue acceleration, which will be managed by BuzzFeed’s business organization,” the company said in an emailed statement.

“As part of these changes, we have made the difficult decision to close HuffPost’s Canada and Quebec operations.”

HuffPost Canada said on a message posted to its website that it will no longer be publishing content.

It said existing content will be maintained as an online archive, but that certain site features will be permanently disabled as of March 12.

Martin O’Hanlon, president of CWA Canada, said the decision is devastating for Canadian journalism and continues the alarming trend of media consolidation across the country.

“It’s brutal for the staff, for our new members. They were looking forward to building on the great work they’ve been doing.”

BuzzFeed noted that HuffPost Canada’s staff has made “enormous contributions to the political and news ecosystems in Canada.”

“We know today is a difficult day, but we are confident that these journalists will continue to do powerful and impactful reporting in the years to come,” the company said. “We will do everything we can to ensure that their transition is a smooth one.”

This report by The Canadian Press was first published March 9, 2021.