To receive Morning Links in your inbox every weekday, sign up for our Breakfast with ARTnews newsletter.

In an attempt to help close a budget gap, New York City arts spending has been slashed by 11 percent. [The New York Times]

Could Matthew Wong be a new market sensation? A painting by the artist, who died last year at 35, sold for at auction earlier this week for $1.5 million, over 15 times its pre-sale estimate. [Bloomberg]

A $1.7 million Camille Pissarro painting is at the center of a pending restitution lawsuit that would involve an American collector and France. [The Art Newspaper] 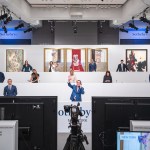 Artists in the Philippines are passionately fighting against an anti-terrorism bill that they say is being used to target them and their work. [South China Morning Post]

At their art lab in Chicago, artists Bob Faust and Nick Cave have invited their friends and colleagues to help address systemic racism via public art. [T: The New York Times Style Magazine]

Andrea K. Scott addresses the removal of a controversial Theodore Roosevelt monument in New York, writing, “At a moment when the world’s museums are being called out for ingrained and unexamined inequalities, the American Museum of Natural History is one of the few to take decisive action.” [The New Yorker]

Daniel Birnbaum remembers the late, legendary curator Germano Celant, writing, “He did have power. Power over institutions and media, and over the success of generations of artists.” [Artforum]

VICTORIA —
Soap for Hope Canada launched an Indigenous online art auction this past weekend – which features close to 100 donated pieces of artwork from B.C. and Alberta artists – to help raise funds amid the COVID-19 pandemic.

The non-profit organization, which has facilities in Victoria and Calgary, provides personal hygiene products like soap and shampoo to people in need across this province and Alberta.

Partnering with local hotels and using volunteers, Soap for Hope diverts and recycles gently used amenities that would otherwise be thrown out. The organization then reprocesses the personal hygiene products into useable personal care items.

The new hygiene products are then sent to remote Indigenous communities and to marginalized groups that need it most, such as homeless shelters, transition houses and food banks.

The program strives to eliminate as much waste from landfills as possible, while also providing an essential service to community facilities and marginalized groups.

However, due to COVID-19, many hotel donations of used soap and shampoo have plummeted, forcing Soap for Hope to buy new product to keep up with demand.

The newly launched online art auction is the organization’s way of raising funds to offset the drop in donations so that Soap for Hope’s work with close to 250 community facilities and Indigenous communities can continue.

“So, 100 per cent of the proceeds raised from this online art auction will stay within the community,” said Danijela Brkovic, Indigenous relations coordinator for Soap For Hope.

“It will help us grow our circle of giving so we can actually reach out into more nations and more communities and help them out in their time of need.”

Hygiene products are essential to helping prevent the spread of COVID-19 and are not always accessible for the most vulnerable, or for those living in remote communities.

“By ensuring nobody ever has to hope for soap, we empower individuals to achieve everything they are capable of,” reads the Soap for Hope website.

“Through hygiene, we build communities, support each other and bring together individuals.”

Soap For Hope Canada also provides gently used bed linens, duvets, pillows, robes and slippers to those in need. The household items are largely donated to the organization through hotel partners.

The Soap For Hope online Indigenous art auction can be found here and runs from Aug. 1 to Aug 15.

“Their art is powerful and can speak volumes and can raise awareness about the beauty that is in our neighbourhood.”

That was the seed planted in three young Calgary artists and it grew into huge, colourful, thought-provoking murals now on display in the northwest community of Sunnyside.

“This is the first mural I have ever done,” Daniel Volante told CBC News.

“I have never used spray paint before and I have never done anything this big before, so it’s been quite the process. I am learning a lot.”

The 17-year-old’s mural, Dreamer, is bookended by the art of two other teens on shipping containers at a Sunnyside park just southeast of the Kensington Safeway.

Volante says he’s spent several hours a day for three weeks putting together his contribution to containR, a pop up arts and culture hub organized by Springboard Performance.

“I wanted it to look dream like. A lot of the colours are vibrant. I used a blue to outline everything,” he explained.

And that’s exactly what Springboard was looking for, the artistic director says.

“What does 2020 mean to you? That was the starting point,” Nicole Mion said.

“The best art comes with what is most meaningful to you. That’s a great place to always start.”

The containR program started in 2009, perhaps ironically, as a way to combat vandalism.

“While it started as a way of deterring tagging, it became a way of sharing incredible art,” Mion said.

Springboard had a call out for artists. A jury narrowed the applications to three.

Their canvas is a shipping container about nine feet by 40 feet (roughly three by 12 metres).

“The point of containR is to connect communities with art,” Mion said.

Another artist, 15-year-old Kate MacLean, was uncomfortable with some of what she sees as media representation of people of colour.

In an eclipse, they are together. So that’s what MacLean has named her piece.

“I wanted the opportunity to paint people of different ethnicities. Different kinds of people are equally beautiful.”

Jaxson Naugler wanted to make a point about interconnectivity in his art.

“A human and a tree. The person’s face turns into a tree. That’s the most important connection,” the 17-year-old said.

“I also added some trippy, colourful stuff on the other side to show that, yes, these two things are connected, but also everything in the universe is connected.”

Naugler says it’s reaction to his work that he most enjoys.

“My favourite part is just hearing what people think it means,” he said.

“Everybody thinks it means something else. It could mean a thousand different things. People’s interpretation is my favourite part.”

The murals will be on display for a few more weeks.

The Bulkley Valley Pool and Recreation Centre has been splashed with some colour.

The outside wall facing the highway is now home to a new mural done by Raven-Tacuara Professional Arts Collective. It is now halfway complete.

Raven-Tucuara is a First Nations art group based in northwest B.C. They say their name is humble nod to the Eagle-Condor prophecy of a united First Nations peoples across the Americas.

Facility Manager Tamara Gillis said this mural project has been in the works for a number of years now and they have been seeking grant funding to make it happen.

“This year we supported an application of the BV Community Arts Council to Wetzin’kwa Community Forest Corporation grant program for this project,” she said. “We are very pleased that the grant funding was awarded.”

The art piece does have First Nations influence and Gillis said the artists ensured that protocols for image design were followed.

“Public art has many benefits and is an excellent way to bring joy and pride to the community,” Gillis added. “We are pleased that our building will be showcased with this large scale mural and enhance the highway corridor through the Town of Smithers. This mural will benefit both locals and those travelling though. This is especially true during this strange time of COVID-19.”

One of the five artists working on the mural is Facundo Gastiazoro. He’s an Argentinian born with a Wichi/Lebanese background. Wichi are First Nations peoples of South America. He currently lives in Smithers.

He said the inspiration for the piece came from children playing.

“Water and the joy when you dive in,” he said. “That moment of being in the air and being super happy, that is the inspiration. I remember being a kid and knowing that I’m going to splash everyone and it is fun and lovely and everything is OK and beautiful.”

Stephanie Anderson is also part of the collective working on the mural and is from the Laksilyu (small frog) Clan. Her family is from Witset and she currently lives in Terrace. Her artwork has won regional and national awards and has been shown across B.C. including at the Vancouver (YVR) airport.

She said there is something special about working close to home.

“I find Smithers to be an awesome, colourful, friendly community,” she added. “I like having my artwork closer to home and also I like putting up some work in Wet’suwet’en territory. I find the community work to be a big draw.”

The one wall is done and the team is waiting for the stucco on the wall facing the arena to be fixed before adding more artwork there.

“It is really awesome, I like how our design has come to life. It is vibrant and really fun,” Anderson said. “We tried a new technique and overlaid the design over the base colours and are happy with the results.”

The other two artists in the collective working on the mural are Amanda Dionne Hugon and Travis Hebert. The collective also hired a student, Robyn Lough, to join them on this project.

There is currently no completion date at this time as the collective is waiting for the repairs to be done on the wall and their canvas first.

Raven-Tacuara are also commissioned to do a mural honouring Missing and Murdered Indigenous Women and Girls on the sides of the Dze L K’ant Friendship Centre building later this summer (See article Page A12).

The Morning After: Samsung revealed the Note 20 and Galaxy Z Fold 2 – Engadget