OTTAWA —
The City of Ottawa is seeing the highest one-day increase in COVID-19 cases in more than a week.

Ottawa Public Health reported 91 new cases of COVID-19 in Ottawa on Thursday, along with one new death linked to novel coronavirus.

It’s the highest one-day increase in COVID-19 cases since Nov. 1, when 132 new cases of COVID-19 were reported in Ottawa. The 91 new cases comes after two straight days with case levels in the 20s.

Public Health Ontario reported a one-day record 1,575 cases of COVID-19 across Ontario. There are 472 new cases in Toronto, 448 in Peel Region and 155 in York Region.

The Ottawa COVID-19 Testing Taskforce reported 1,692 swabs were taken at assessment centres in Ottawa on Nov. 10. A total of 3,319 lab tests were performed in Ottawa.

Across Ontario, nearly 39,600 tests were performed.

There are 59 people in an Ottawa hospital with COVID-19 related illnesses, including three in the intensive care unit.

A total 6,880 people recovered after testing positive for COVID-19.

COVID-19 CASES ACROSS THE REGION

There are two new cases in the Leeds, Grenville and Lanark District Health Unit.

The COVID-19 outbreaks are over at Riverpath Retirement, Innovative Community Support Services and the Ottawa Hospital – General Campus 6W. The outbreak is also over at the Ottawa Islamic School.

Demand for coronavirus testing is down, but positive cases spike across Canada – Global News 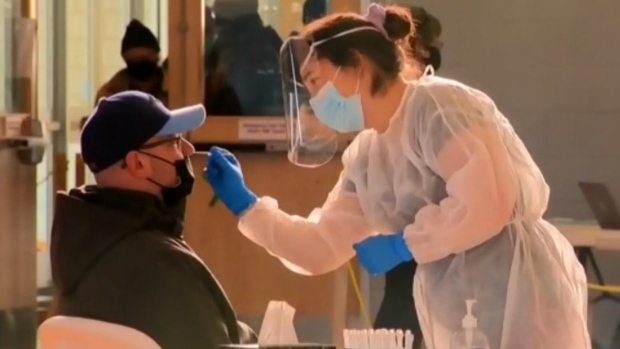 HALIFAX —
Nova Scotia has extended the pandemic restrictions in areas of the Halifax Regional Municipality and Hants County for at least one more week.

Dr. Robert Strang noted that Nova Scotia is still reporting daily cases in the double digits, including another 15 on Friday.

“Modelling projects that this will continue for several more days,” Strang said during a news conference in Halifax on Friday. “So we need more time with the existing restrictions in place to see these numbers come down and to be certain they will stay down.”

The restrictions will remain in place until at least Dec. 16.

A decision on whether to continue with restrictions that saw Atlantic Canada’s largest city close down in-person dining at restaurants as well as close public libraries, museums, gyms and casinos, was to be made next Wednesday. Strang said that’s now been moved to Dec. 16.

He said he couldn’t make any promises about what the situation will look like then.

“What I can tell you is that the more we buckle down and stay tight right now . . . the better position we will be in to have some slight relaxation as we enter the holiday weeks before January starts.”

MORE TESTING FOR PEOPLE WITHOUT SYMPTOMS

The province also launched a period of asymptomatic testing across the province to limit the potential spread of the virus by detecting positive cases in people who do not have symptoms.

“For the past week, we have had double-digit case numbers daily and most of them are in the areas where we added restrictions last week. These restrictions are important to help us slow the spread of COVID-19,” said Nova Scotia Premier Stephen McNeil. “We have also ramped up testing significantly as a key measure in containing the virus. Adding more opportunities for asymptomatic testing is another way of enhancing our testing strategy.”

McNeil said that in the last two weeks, public health has conducted more than 7,000 rapid tests and these have helped flag 22 potential cases of COVID-19 from people who had no symptoms.

“Without everyone’s hard work to run these clinics, and without all of you coming forward to be tested, we would not be able to track COVID as quickly,” McNeil said.

Health officials in Nova Scotia reported 15 new COVID-19 cases on Friday. With 17 more cases resolved, the number of active cases has dropped to 117.

Eleven of the new cases are located in Nova Scotia’s Central Zone. This includes a case connected to Halifax’s Citadel High School, which was first reported late Thursday.

Three cases are in the Northern Zone and are close contacts of previously reported cases.

The other case is in the Western Zone and is related to travel outside Atlantic Canada.

Nova Scotia Health says a positive case has also been identified at Park West School, a primary to Grade 9 school in Halifax.

The person did not attend school on Friday and is self-isolating.

The school will remain closed to students until Dec. 10 so a deep cleaning can take place. Students will study from home in the meantime.

Nova Scotia health says, as a precautionary measure, the school’s offsite pre-primary location will also be closed until Dec. 10. Students and families can expect an update on Wednesday.

Public health will notify any close contacts of the person who tested positive. Everyone who is a close contact will be notified, tested and required to self-isolate for 14 days.

Strang said the province has added voluntary testing for rotational workers who are not showing symptoms.

Rotational workers can book an appointment through the COVID-19 self-assessment on Day 6, 7, or 8 of their modified self-isolation.

“This will not change any of the restrictions, but it does offer a level of reassurance if they don’t have COVID, and if they do, it will help us contain the virus quicker,” said Strang.

There have been no deaths during the second wave and no one is in hospital. Cases range in age from under 10 to over 70.

Since the start of the pandemic, Nova Scotia has conducted a total of 196,425 tests, with 1,358 positive cases confirmed overall. Of those, 1,176 cases are considered resolved and 65 people have died.

The province’s overall confirmed cases range in age from under 10 to over 90.

Fifty seven per cent of cases are female and 43 per cent are male.

There are cases confirmed across the province, but most have been identified in the Central Zone, which contains the Halifax Regional Municipality.

The provincial government says cumulative cases by zone may change as data is updated in Panorama, the province’s electronic information system.

The numbers reflect where a person lives and not where their sample was collected.

The provincial state of emergency, which was first declared on March 22, has been extended to Dec. 13.

The app, which can be downloaded through the Apple App Store or Google Play, notifies users if they may have been exposed to someone who has tested positive for COVID-19.

Anyone who experiences a fever or new or worsening cough, or two or more of the following new or worsening symptoms, is encouraged to take an online test or call 811 to determine if they need to be tested for COVID-19:

With files from The Canadian Press.

U.S. biotech firm Moderna says its vaccine is showing signs of producing lasting immunity to COVID-19 and that it will have as many as 125 million doses available by the end of March.

Moderna’s messenger RNA vaccine is one of the first two Health Canada expects to approve, with at least 20 million doses guaranteed for Canadians.

Currently, only two million doses are supposed to arrive in the first three months of 2021, but the company says it should have 15 to 25 million doses available for non-U. S. deliveries before the end of March.

Moderna has said Canada — the first country to sign a deal to buy its vaccine — will be getting doses from the company’s first batches, but it’s not yet clear whether Canada will receive more than two million doses in its first deliveries.

Moderna is among several vaccine makers whose initial clinical results show their vaccines are safe and effective at creating antibodies, but since the vaccines are so new there has not been enough time to know how long those antibodies will last.