OTTAWA —
The COVID-19 wastewater monitoring in Ottawa, which often signals a rise in cases a few days before it happens, is trending downward.

Data from the Ottawa COVID-19 wastewater surveillance project shows levels have been dropping steadily after they climbed in early March.

“I know people are getting whiplash with this thing but numbers are looking lower now. We’re staring at them and making sure but we’re no longer climbing,” he said.

COVID-19 case counts have been rising in recent days, with Ottawa’s incidence rate of new cases per 100,000 population in the past week hitting 55 on Tuesday. The threshold for the red zone is 40 cases per 100,000. Ottawa moved to the “Red-Control” level on Friday.

MacKenzie said the team at the CHEO Research Institute and the University of Ottawa will keep monitoring the data.

“Right now, it looks like they’re down. I know we’ve just reluctantly gone into the red and I don’t want to contradict Dr. (Vera) Etches, I think this is the right thing to do, but we’ll have to watch the wastewater the next couple of days and it may well be that the trend holds,” he said.

The wastewater monitoring project has been ongoing since June and rises in the viral concentration in the sewage being tested often precede rises in lab-confirmed cases through in-person testing by a few days.

The reporting has detected levels of the B.1.1.7 variant of COVID-19, first identified in the U.K., as of March 18. The levels of variants of concern in Ottawa have been rising throughout March according to data from Public Health Ontario.

However, MacKenzie said he is optimistic Ottawa is turning a corner.

“I really think we’re very close to the end here,” he said. “I know we’ve said that in the pasy but I just think that good results from a single vaccine as far as severe infections and mortality, the vaccines are coming, it’s now spring, I really think we’ve got this, to be honest.” 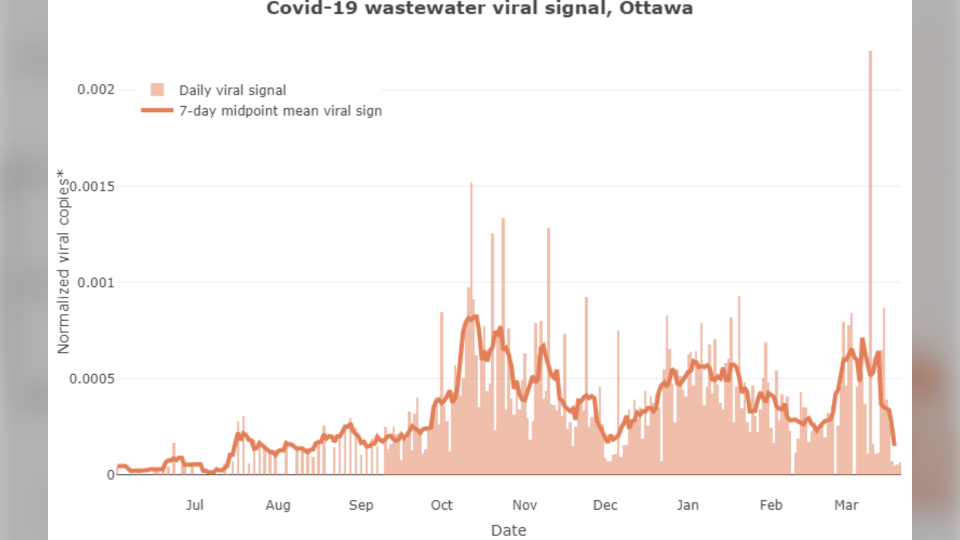 A snapshot of the level of COVID-19 detected in Ottawa’s wastewater by the Ottawa COVID-19 wastewater surveillance project, downloaded March 24, 2021. (Image via 613covid.ca/wastewater)