With just a few days to go before Albertans have to show a QR code as vaccination proof, a Stony Plain teen is worried she’ll be left out.

Kaylee Krug says she received both vaccine doses, “so I could live my life again.”

But when her family downloaded their new vaccination QR codes, the record for Kaylee showed only one dose received.

The second dose on her paper record was missing from the system, prompting an error code that she wasn’t fully vaccinated.

“All three of my kids were immunized the same day, the same clinic, both times. And my other two show up just fine, it’s just Kaylee that doesn’t show up,” her mother Barb said.

Starting Nov. 15, Alberta Health will no longer allow forms of vaccine proof other than its QR code that Albertans have to download and display on their phones or print before entering businesses taking part in the Restrictions Exemption Program.

She reached out to Alberta Health for help at the beginning of October and said it took nearly a month for a response.

Barb Krug says officials told her to keep checking back, and she has, but the error persists. 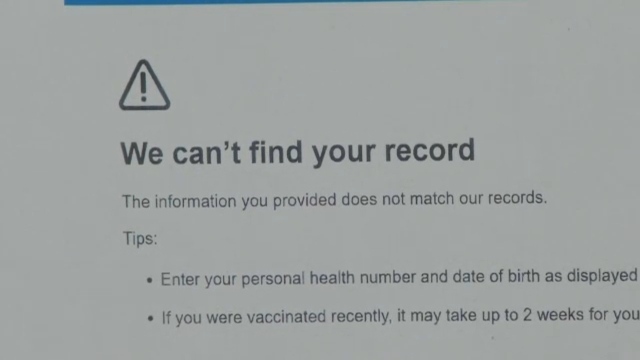 CTV News Edmonton requested an interview with someone from Alberta Health about the issue on Friday, but the request was ignored.

Spokesperson Steve Buick said only that his ministry would be “putting out an update on this soon.”

“What we’ve been told by the government is no leeway. It is the updated QR code or nothing,” board member Ernie Tsu said.

“It won’t approve if it’s one. It has to be two. That is the only way that you will get the green checkmark.”

Alberta Health previously announced that Albertans can get a free copy of their QR code at registry agents or by calling 811.