Samsung is making a killing with its Galaxy A series of budget and mid-range devices. The Galaxy A10 from last year was the top-selling Android smartphone in 2019, with the Galaxy A50 and Galaxy A20 taking the next two spots. The Galaxy A51, which was launched towards the end of last year, was the top-selling Android smartphone in Q1 2020 and it was accompanied by the Galaxy A10s and Galaxy A20s in the third and sixth spots, respectively. So it only makes sense for the company to keep refreshing these models with new and improved hardware. And that’s exactly what Samsung is doing. Since this beginning of this year, Samsung has released several new models in the Galaxy A series, including the Galaxy A11, Galaxy A31, and the Galaxy A41. Adding on to the list, the company has now announced the new Samsung Galaxy A21s which was leaked earlier this month.

According to a press release shared by the company, the Galaxy A21s is a budget offering that packs in a 6.5-inch HD+ (720 x 1600) Infinity-O display. Powering the device is an unspecified octa-core SoC clocked at 2.0GHz, coupled with 3GB, 4GB or 6GB RAM and 32/64GB onboard storage. In the camera department, the Galaxy A21s features a quad-camera setup on the back with a 49MP primary sensor, an 8MP ultra-wide sensor, a 2MP depth sensor, and a 2MP macro camera. Over on the front, the device has a single 13MP selfie camera housed in the hole-punch cutout in the top left corner of the device. The device has a rear-mounted fingerprint scanner and it packs in a massive 5,000mAh battery with support 15W fast charging. On the software front, the device runs Samsung’s One UI skin based on Android 10.

Want more posts like this delivered to your inbox? Enter your email to be subscribed to our newsletter.

Google Chrome now groups browser tabs. Here's how to do it – CNET

One of the biggest uncertainties currently surrounding the PlayStation 5 is in regards to how much the next-gen console will actually cost.

While a price still has yet to be confirmed, comments made by Sony Interactive Entertainment president and CEO Jim Ryan during a recent interview with GamesIndustry.biz might help set some expectations.

According to Ryan, it’s most important to Sony that the PS5 offers the “best possible value proposition,” which “[doesn’t] necessarily mean lowest price.” This suggests that Microsoft’s next-gen console, the Xbox Series X, may cost less than the PS5. However, Microsoft hasn’t yet specified a price for the Series X, either, so this is still remains to be seen.

“Value is a combination of many things,” said Ryan in regards to the PS5. “In our area it means games, it means number of games, depth of games, breadth of games, quality of games, price of games… all of these things and how they avail themselves of the feature set of the platform.”

Ryan didn’t elaborate on any of this, although he did address speculation that the COVID-19 pandemic could disrupt PlayStation’s plans for the console this year.

“We, and our partners, seem to be coping really well,” Ryan told GameIndustry.biz. “And so we are on track. We are going to launch this holiday and we’re going to launch globally.” In a separate BBC interview, Ryan also confirmed that the COVID-19 pandemic has not changed Sony’s pricing plans for the PS5.

To that point, Ryan noted in the GamesIndustry.biz interview that “recent history has told us that gaming is one of the pastimes, and one of the businesses, that benefits in economically difficult times.” That said, he conceded that “the historic templates, the historic models, that have applied in the past may not apply in the future,” given the ever-changing global health crisis.

For now, Sony plans to hold a major digital event on June 4th to unveil a suite of PlayStation 5 games. It’s unclear whether pricing or even the look of the console will be revealed during this event. However, Sony did mention that it will be the first in a series of PS5 updates over the coming weeks.

Ford’s China venture with Changan Automobile (000625.SZ) is seeking government approval to build a plug-in hybrid model equipped with BYD’s batteries, according to the document.

Shenzhen-based BYD, which is backed by U.S. investor Warren Buffett, said it would supply EV components including batteries and power management devices.

The Dearborn, Michigan-based automaker said last year it planned to launch more than 30 new or significantly redesigned models in China by the end of 2021, of which over a third will be electric vehicles.

Ford and BYD did not immediately respond to requests for comment. 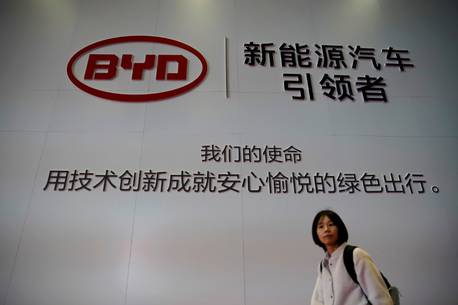 Ford’s China venture with Changan Automobile 000625.SZ> is seeking government approval to build a plug-in hybrid model equipped with BYD’s batteries, according to the document.

Shenzhen-based BYD, which is backed by U.S. investor Warren Buffett, said it would supply EV components including batteries and power management devices.

The Dearborn, Michigan-based automaker said last year it planned to launch more than 30 new or significantly redesigned models in China by the end of 2021, of which over a third will be electric vehicles.

Ford and BYD did not immediately respond to requests for comment.