Paes164, from Knobhill Urban Arts District, will host the live virtual art show from his garage. The live Facebook and Youtube streaming event will feature everything from live music, DJs, art, and fun that people can enjoy from the comfort of their own home.

The event organizer, Paes164 says, “I think it’s going to fill that void for all the events in town that got canceled in reference to art and creativities.” The show will stream live on Facebook and Youtube.

After fulfilling a lifelong dream of running in the U.S. Olympic Marathon Trials earlier this spring, the Alaska native has been mapping his Sunday routes into complex works of art. Tomsich runs the routes turn-by-turn with his GPS watch and posts them to the Strava—a social media platform for athletes.

“It’s always kind of been on my radar,” Tomsich says of the idea. After years of training to qualify for the marathon trials, he didn’t have a big plan going forward.

“As the pandemic hit, it became clear that running was going to look a bit different,” adds Tomsich. “We were going to have to do this by ourselves and so forth. I definitely looked at different ways to enjoy the sport.”

Tomsich attempted an Easter bunny on Sunday, April 12th, and said his Strava feed exploded with comments after the run.

“I was just floored by the response that I got,” he says. “People absolutely loved it.”

Tomsich knew he had to keep going.

He has since drawn a boat sailing by a lighthouse, a thunderbird at UBC (the university’s mascot), and an orca. Tomsich wished people a happy Mother’s Day with a 25-kilometre-long vase of flowers.

However, the most difficult drawing was a finish line, complete with two triumphant stick-runners, which he says was meant to inspire people even as official spring races were cancelled.

“It is a way to engage and to get people excited and share what is possible when we can’t have races right now or can’t have big group gatherings.”

Tomsich uses Strava’s “Route Builder” function to map out the run. His wife, Kate, has been following him on her bike and posting Instagram video updates to build suspense around what the picture will be. Tomsich’s drawings vary from 24km to 35km, a typical Sunday run for an avid marathon.

“I asked my wife Kate to join,” he says. “It’s our time to spend together to disconnect and just be out.”

Tomsich coaches with Mile2Marathon, a running group founded by Canadian Olympian Dylan Wykes to help beginner, intermediate, and advanced runners improve their race times while engaging in the social aspects of the running.

Mile2Marathon’s motto is #bettertogether and while many of its athletes are disappointed that they can’t run in groups, Tomsich hopes to inspire runners to keep going.

“I think the bigger message that I want to be able to portray to people with all this is that if you can identify what it is that you’re passionate about or what you love, there’s always ways to share that with other people.”

VANCOUVER —
A New Westminster elementary school teacher is asking her students to tap into their inner Renoirs and Emily Carrs—but instead of paint and brushes, their materials include stuffed animals, Lego and dolls.

Sara Fox, a Grade 3 and 4 Montesorri teacher at Connaught Heights Elementary School, has assigned her students to recreate famous works of art using their toys.

Fox was forced to take her instruction online because of the COVID-19 pandemic, but her students’ regular art teacher was not able to continue their lessons as they’d been asked to instruct the children of essential workers. So Fox tapped into her own creativity to keep the instruction going, assigning her students to use their imaginations to put their own spins on classic works of art.

Leonardo da Vinci’s The Last Supper was reimagined by Fox’s student Audrey, who replaced the glasses of wine, plates and apostles in the original with plastic cupcakes, bananas and chubby stuffed animals, including a rotund raccoon and giraffe. She titled her creation, The Squishmallow Supper.

Student Angelica recreated the iconic 1930 Grant Wood painting American Gothic using purple and grey stuffed animals. In her version, which she named Stuffie Gothic, a fork replaced the ubiquitous pitchfork from the original. 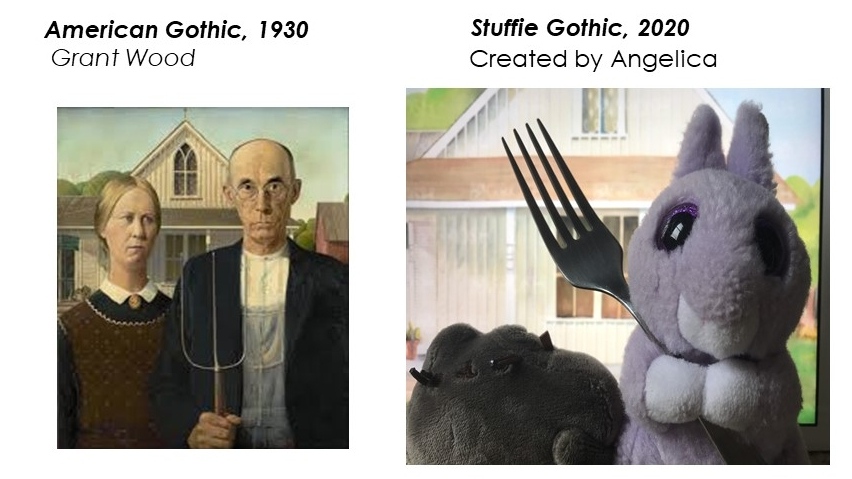 In Kai’s version of Dogs Playing Poker, the poker chips from the original painting were replaced with potato chips, and the dogs playing cards around the table are plush. Bottles of mini-yogurts stand in place of beer and whiskey, and a clock on the wall hangs in the same place as the grandfather clock from the original. 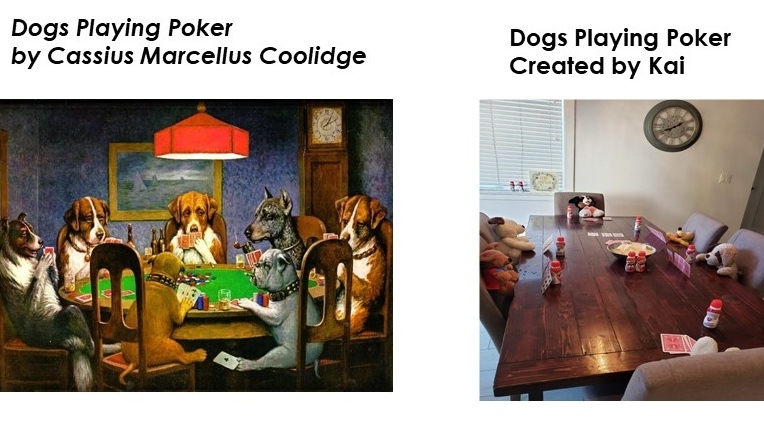 To see more of the students’ artwork, click through the images below this story.

Activism takes on many forms. Currently, the world is watching as thousands band together to call for justice and reform after a white police officer in Minneapolis murdered George Floyd, a black man accused of using a counterfeit bank note, as three other officers stood by idly. In cities across the US and elsewhere, people have taken to the streets, others have donated to organizations, people have lent an ear or been a shoulder to lean on, and still, many have responded with art.

Art has a long history with activist movements of every kind and, in many cases, the art created to spread information and awareness are what linger when the day is done and protestors head home. According to Tate Galleries, the activist art is created to offer a “form of political or social currency, actively addressing cultural power structures rather than representing them or simply describing them.” Ai Weiwei, Favianna Rodriguez, The Guerrilla Girls, Shepard Fairey, Paul Nicklen, Nan Goldin, Dadaists, Keith Haring, Diego Rivera, Kara Walker, Edgar Heap of Birds, and many more artists and artists groups have created such currencies through their art, visual and otherwise.

Museums and galleries have highlighted the posters, photographs, poems, and novels that have been the outcome of unrest. Just last year, the Victoria and Albert Museum began collecting artworks and items used by climate change activists to document living history. Earlier this year, protestors at the British Museum made a wooden Trojan Horse used during their demonstration against the museum’s ongoing relationship with BP. Their symbolism and words become a touchstone for those searching for inspiration, resolve, and comfort during uprisings. Old works, like Zoe Leonard’s 1992 poem I Want a President, are revived when society needs a reminder of the steps we’ve made and how much further we have to go. Themes of unity, despair, anguish, love, frustration, and exhaustion become prevalent in works from most any movement and are prevalent in today’s protests.

In light of recent and ongoing events, we’re highlighting works by some of the most influential artists, past and present, whose works are meant to serve an activist purpose. This is in no way an exhaustive list of those that might speak to you and the issues you hold near, but they are a tool in the fight to find common ground, unify, grow, and develop as members of our own communities.

Print by Gary Taxali whose works feature themes of frustration among others.

A silhouette by Kara Walker, whose works reflect issues of race, gender, sexuality, violence, and identity.

Nan Goldin began photographing her life in the 1980s and her subsequent portraiture highlighted life within the LGBTQ community, documented the AIDS epidemic, as well as the opioid crisis.

Ai Weiwei, a Chinese artist in exile, creates works that centre on social issues and are often critical of the Chinese government.

Formed in 1985, The Guerrilla Girls is an anonymous group of female, feminist artists who worked to highlight sexism and racism within the art world.

Nature photographer Paul Nicklen uses his works to raise awareness of climate change and its affects on the globe and the animals that call it home.

One of our final expeditions at the end of last year was to Antarctica. It is a continent of contradictions. A place that has both challenged and inspired me. An environment with species dependent on massive icebergs and tiny underwater organisms. A continent that is seemingly distant yet so intimately interconnected to all of us. Today, on this 50th anniversary of #EarthDay, I find myself thinking about Antarctica and what the continent will look like 50 years from now. That future depends on the actions we take together, today, to safeguard vital ecosystems and address global climate change. We have to do more as a community to promote and protect the beauty of our shared planet. That’s why I’m excited to announce that this summer, @mitty and I are joining a group of ocean explorers, conservationists, and advocates to launch a new endeavor called @onlyone. Building on the work of @sealegacy and #TheTide, this effort will amplify powerful stories and advance promising solutions to protect our ocean and habitats around the world, including in the Southern Ocean. Learn more by following @onlyone and join the journey launching this summer at www.only.one. #EarthDay2020

60 minutes of mayhem: How aggressive politics and policing turned a peaceful protest into a violent confrontation – CNN