As part of the agreement, Rumble will deliver video and streaming for TRUTH Social, the proposed social media app from Trump.

Rumble was launched in 2013 by tech entrepreneur Chris Pavlovski as an alternative YouTube-style site, and is popular among U.S. conservatives seeking an alternative to Big Tech. Its top trending videos include those from conservative commentators Dan Bongino and Dinesh D’Souza, as well as former Trump White House strategist Steve Bannon. It is backed by venture capitalist Peter Thiel and author-turned-U.S. Senate candidate J.D. Vance through Narya Capital.

On Dec. 1 Rumble said it would go public by merging with blank-check firm CF Acquisition Corp VI at an initial enterprise value of $2.1 billion. The combined company will be called Rumble and is expected to list on the Nasdaq.

TMTG has provided few details for how it plans to create a social media platform, streaming service, news division and alternative cloud provider to compete against entrenched players in those categories.

The company said on Dec. 6 that U.S. Representative Devin Nunes, the top Republican on the House Intelligence Committee, will leave Congress to become chief executive officer of the new venture, and will assume the role in January.

(Reporting by Helen Coster in New York and Niket Nishant in Bengaluru; Editing by Shounak Dasgupta and David Gregorio) 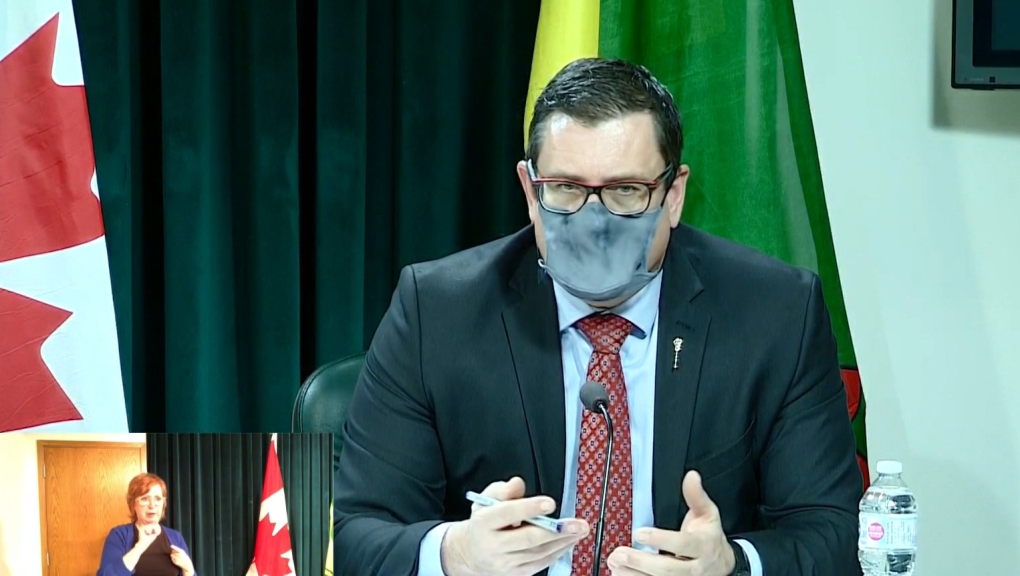 The briefings, streamed digitally from the legislature in Regina, provide an update on the latest pandemic information in the province and offer an opportunity for members of the media to question leaders.

During the media availability, Merriman was asked about his absence.

“Just because I’m not in front of the camera doesn’t mean that I’m not working,” Merriman said.

Merriman said he has been available for “media callbacks” to answer journalists’ questions.

A spokesperson for the Ministry of Health was unable to say how many interviews he has done and with which news outlets, but that the office “fields a significant number of media requests” each week.

“I am available all the time to be able to make sure I’m conveying the information,” Merriman said at the conference.

“He is constantly hiding from scrutiny. He fails to do his job over and over again,” the leader of the official opposition said.

During the briefing, Premier Scott Moe defended Saskatchewan’s move not to add more public health orders. He said the Omicron variant is going to spread regardless of stricter rules.

“I believe what we saw today was a political message that could not possibly sit beside an honest public health message,” Meili said.

Moe stood up for Merriman during the news conference. He said Merriman has been busy working at the Saskatoon Cabinet Office.

“I would just like to take the opportunity to thank him for the effort that he’s made not just through Christmas and January but throughout his time as health minister,” Moe said.

Today, fewer Canadians are watching CBC with the network taking just 5% of the available English television audience in primetime.

The most recent ratings available show just one CBC show making the top 30 — the heavily promoted Son of a Critch brought in 941,000 viewers on Jan. 4 putting it in 28th spot.

Netflix, Peloton bring the pandemic-stock era to a shuddering halt

Others are suffering as well. Zoom Video Communications Inc., the owner of the ubiquitous video conferencing software, is trading at the lowest level since May 2020, as is e-signature company DocuSign Inc. Both stocks have lost more than half of their market values from record highs and slid further after Netflix’s results. Etsy Inc., the e-commerce company that saw strong pandemic demand for face masks and other products, is down more than 45 percent from a November peak. It last closed at its lowest since May.

Could Netflix be a good value stock?

While Netflix is falling out of favour with growth-focused investors, it is starting to gain merit as a value stock. Despite its somewhat disappointing subscriber gain, Netflix posted earnings per share (EPS) of $1.33 last quarter, easily beating its guidance and the analyst consensus of $0.82. This brought its full-year EPS to $11.24.

Netflix expects its operating margin to retreat somewhat in 2022 — largely due to exchange rate pressures — following several years of extremely strong margin expansion. Still, margin expansion will likely resume in 2023. Even with slower subscriber growth, the operating leverage inherent in Netflix’s business model should enable the company to grow revenue faster than expenses for the foreseeable future. – Adam Levine-Weinberg, The Motley Fool

Streaming wars price tag could top $140B this year

Sports broadcasting rights are a substantial part of the overall totals. Their cost has skyrocketed in recent renewal negotiations by networks with the NFL, NHL, NBA, English Premier League and other major European soccer leagues and competitions, and cricket’s Indian Premier League. – David Bloom, Forbes

A lot of journalists — and the executives who manage them — will head into a decidedly non-traditional competition in 2022, one that won’t necessarily be won with news scoops. They are rushing to produce new kinds of show formats, and relying on anchors both familiar and less so, all in a furious bid to keep a younger generation of consumers from developing new connections with digital upstarts that threaten to siphon them away. The fight is well underway: NBC News just before Christmas ran full-page ads in The New York Times and The Wall Street Journal touting its still-growing NBC News Now streaming outlet. CNN, meanwhile, is expected to launch a significant marketing blitz behind its soon-to-launch CNN Plus, which will require a monthly subscription fee. NBC News’ ad tells people its streaming product is “Streaming. Free. 24/7” because it’s not behind a paywall. “We believe it serves the consumer better for us to be ubiquitous,” says Chris Berend, executive vice president of digital operations for NBCU’s news operations.

The skirmish is intensifying at a critical moment. Big media companies like Comcast and Disney are under pressure from Wall Street to show more growth in subscriptions to outlets like Peacock and Disney Plus. Meanwhile, their news operations are facing significant long-term declines in viewership, both for cable news after the heady 2020 election as well as their morning-news franchises and evening-news mainstays. – Brian Steinberg, Variety

CORBEVAX, a new patent-free Covid-19 vaccine, could be a pandemic game-changer globally

Another major difference is that the CORBEVAX vaccine was developed with global vaccine access in mind. The goal was to make a low-cost, easy-to-produce and -transport vaccine using a well-tested and safe method. Key to this, the researchers were not concerned with intellectual property or financial benefit. The vaccine was produced without significant public funding; the US$7 million needed for development was provided by philanthropists. – Maureen Ferran, The Conversation

Momentum is building for a conflict in Ukraine. A gaffe by Joe Biden has given Russia the upper hand. The US President suggested he would tolerate a “minor invasion” in Ukraine. Palki Sharma tells you more.

My dishwasher wants to spy on me!

It’s time to say “No” to Big Tech and “smart” appliances that are, in reality, data thieves attaching themselves to us and our homes like blood-sucking parasites. – Thom Hartmann, The Hartmann Report

How to avoid unwanted photos on social media

If you spot an unwanted photo of you on your News Feed, there are things you can do. – Dalvin Brown, The Wall Street Journal

The government in the UK has a guy named Jonathan Hall whose title is Independent Reviewer of Terrorism. His job is to be a “watchdog” over domestic terrorism. According to Mr. Hall, the UK’s 2006 Terrorism Act requires that online companies take down any material that encourages terrorist activities.

Hall says the internet, and social media in particular, has become “the main frontier” for wannabe terrorists and that the Terrorism Act allows for jail time for those who allow the promotion of terrorism to continue on their sites. Hall was particularly scathing about Facebook and Mark Zuckerberg. He said it was “pointless” to appeal to Zuckerberg to act morally.

I’d be happy to send Zuckerberg to jail just for his stupid fucking haircut. – Bob Hoffman, The Ad Contrarian