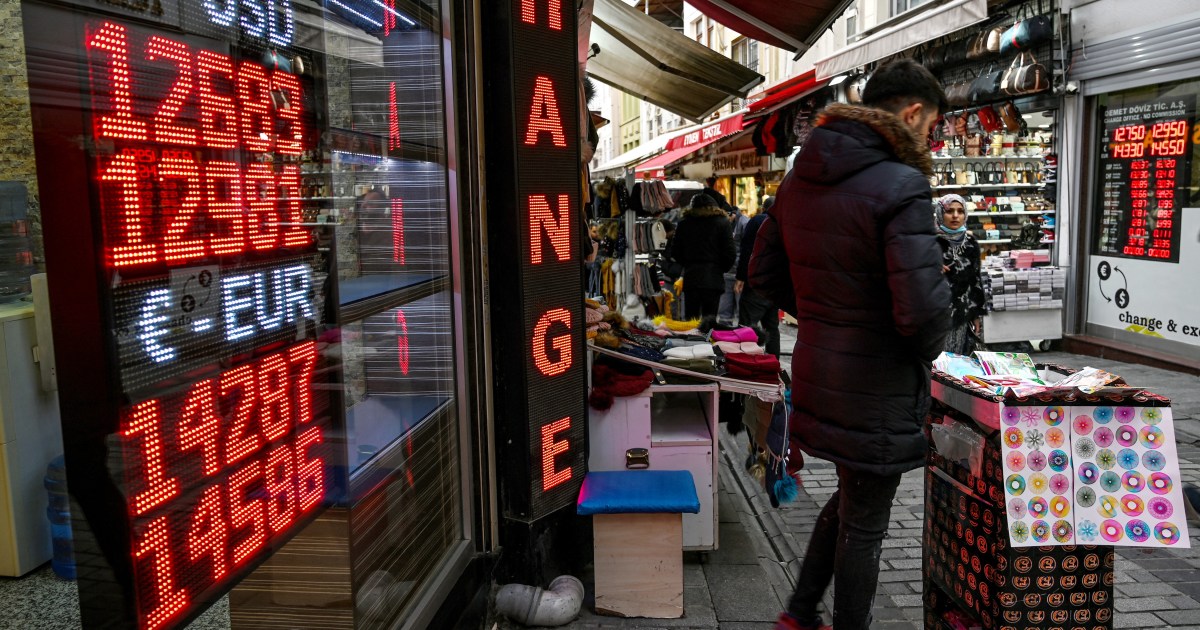 Nureddin Nebati takes on the role of finance minister after Lutfi Elvan resigns.

Turkish President Recep Tayyip Erdogan has replaced the country’s finance minister after weeks of economic turmoil in which inflation soared as the lira plummeted to record lows.

The currency has lost more than 40 percent of its value against the US dollar this year, making it the worst-performing of all emerging market currencies.

According to a presidential decree issued near midnight on Wednesday, Erdogan accepted the resignation of Lutfi Elvan and appointed his deputy, Nureddin Nebati, as the new finance minister.

His predecessor had only been in the role since November 2020, when he was appointed after the resignation of Erdogan’s son-in-law, Berat Albayrak.

Earlier on Wednesday, the Turkish Central Bank intervened in markets to prop up the nosediving lira, which has lost nearly 30 percent in value against the dollar in just a month.

Under pressure from Erdogan, Turkey’s officially independent central bank lowered its key interest rate in November for the third time in less than two months. It did so despite inflation approaching 20 percent – four times the government’s target.

Erdogan believes that high interest rates cause high inflation – the exact opposite of conventional economic thinking – and has insisted he would keep rates low.

Turkey’s currency hit yet another record low of more than 14 to the dollar before recouping some losses on Wednesday after a central bank move to sell reserves. One dollar bought 13.22 lira as of Wednesday afternoon.

The recovery, however, was short-lived after Erdogan appeared again to defend his “new economic model” against the “malice of interest”.

Since 2019, Erdogan has sacked three central bank governors who opposed his desire for lower interest rates. The president, who has blamed the lira’s troubles on foreigners sabotaging Turkey’s economy and on their supporters in the country, believes lower rates will fight inflation, boost economic growth, power exports and create jobs.

On Tuesday, figures showed Turkey’s economy had grown by 7.4 percent in the third quarter, compared with a year earlier, but some analysts believe the surge could be short-lived due to the high inflation and currency meltdown.

Meanwhile, public discontent appears to be on the rise.

Last week, demonstrators protested economic policies in the largest city of Istanbul and the capital, Ankara, while the main opposition Republican People’s Party plans a rally for early elections on Saturday in the southern city of Mersin.

What the Omicron variant means for the world economy – The Economist

He told reporters there was “quite a bit of room to raise interest rates without threatening the labour market” and said the Fed was of a mind to begin lifting rates in March.

The dollar leapt 0.7% against the yen in the wake of the Fed’s decision and Powell’s remarks, its steepest daily jump in more than two months as the prospect of imminent hikes spooked stock markets and drove bond yields higher.

The yen inched a fraction lower to 114.74 per dollar early in the Asia session.

Sterling and the Australian dollars also dropped with the mood and the New Zealand dollar fell to its lowest since Nov. 2020.

“While communication from Fed members in the lead-up to this meeting meant that the pivot should not have been a surprise, risk appetite shrivelled as Powell’s press conference progressed and the extent of the Fed’s commitment to act in the face of significant inflation pressure became clear,” said ANZ analysts.

The Australian dollar fell close to its 2022 low in the overnight session before recovering a little to $0.7119. The kiwi posted a fifth consecutive daily loss to touch $0.6639. Both Antipodeans steadied in early trade. [AUD/]

Sterling is hovering at $1.3469 as investors await a Bank of England meeting next week and have an eye on the political turmoil enveloping Prime Minister Boris Johnson, who is under pressure after attending parties during lockdowns.

On Thursday, data showed New Zealand inflation a little hotter than forecast and running at a three-decade high.

Chinese industrial profits data is due later in the day, as well as U.S. economic growth and jobless claims figures.

After a battering last week, cryptocurrencies held their ground in the wake of the Fed’s meeting and bitcoin last bought $35,869.

The Canadian dollar fell against its broadly stronger U.S. counterpart on Wednesday as the Bank of Canada surprised some investors by leaving interest rates on hold, offsetting support for the currency from higher oil prices.

The Bank of Canada will soon start hiking interest rates from record lows to combat inflation, Governor Tiff Macklem said, after the central bank left its policy rate at a record low of 0.25%.

Money markets had seen about a 70% chance that the central bank would hike on Wednesday for the first time since October 2018. They now expect lift-off in March.

“The disappointment from the Bank of Canada will quickly fade while the tailwind from oil is significantly growing,” said Adam Button, chief currency analyst at ForexLive.

“The open question is how much of the recent rise is fundamental and how much is political.”

Rising political tensions between Russia and Ukraine have added to concerns about further disruption in an already-tight market for oil, one of Canada’s major exports. U.S. crude oil futures settled 2% higher at $87.35 a barrel.

The U.S. dollar rallied against a basket of major currencies and Wall Street gave back its earlier gains as the Federal Reserve signaled that it is likely to raise U.S. interest rates in March and later launch a significant reduction in its asset holdings.

Canadian government bond yields rose across the curve although by much less than U.S. rates. The 10-year was up 2.2 basis points at 1.826%.

Last Wednesday, it touched its highest level in nearly three years at 1.905%.

Poll suggests some Canadians are feeling brighter about the economy, own finances – Coast Reporter 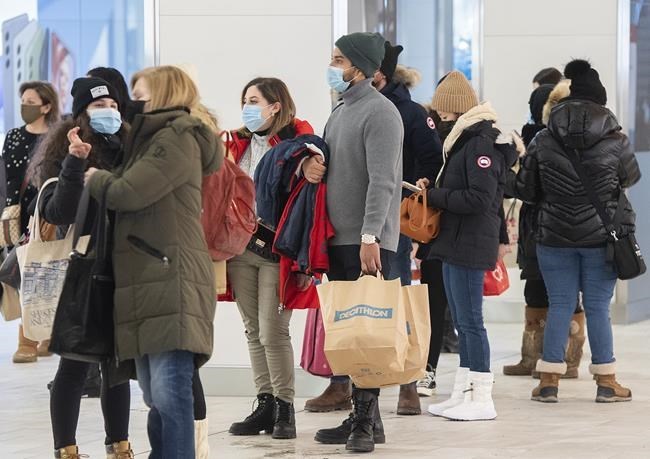 OTTAWA — A new poll suggests some Canadians are feeling more upbeat about the state of the domestic economy and their own pocketbooks, though not quite as positive as they were before the COVID-19 pandemic.

The annual Leger survey of economic confidence found that nearly two in every five respondents rated the economy as being good or very good, which was up from the same survey last February.

Still, just over half of respondents weren’t as chipper on the state of the economy, with 54 per cent rating it as poor or very poor.

That figure was a drop from the 61 per cent of respondents in last year’s survey, but still above the 36 per cent recorded in February 2020 just before the first wave of the pandemic.

About two-thirds of respondents also showed confidence in their personal finances, a figure that has remained steady through surveys in each of the previous two years.

The poll of 2,399 Canadians who took part in an online panel between Jan. 7 and 12 cannot be given a margin of error because internet panels are not considered to be truly random samples.

Christian Bourque, Leger’s executive vice-president, said the results suggest respondents are more optimistic about the economy than markets and economists who have downshifted expectations for the year. The poll indicates that optimism also extends to their personal finances despite high inflation rates.

“People feel a little bit more upbeat than one would have thought and it’s certainly an increase from what we saw over the past year in terms of overall optimism,” Bourque said.

Downgrading expectations comes on the back of signals from central banks on both sides of the border that their rock-bottom interest rates will go up this year to combat high inflation. There are also supply-chain problems and the spread of the Omicron variant that have created economic headwinds to kick-start 2022.

On Wednesday, the Bank of Canada released its updated outlook for the economy.

The central bank estimated the economy grew by 4.6 per cent in 2021, down half a percentage point from its previous forecast in October, and now projects growth in real gross domestic product in 2022 at four per cent, down from 4.3 per cent.

The Bank of Canada said part of the downgrade this year is due to the impact of Omicron, hints from governments that spending is easing earlier than expected, and supply chain issues that will have “larger and more broad-based negative implications on economic activity” this year.

Canadians generally are fairly upbeat about the national economy, mixed with some level of prudence for what may come, which Bourque noted played out in regional results.

The biggest boost in optimism for the economy between last year and now came from respondents in Alberta. But the oil-producing province also had the largest percentage of respondents, at 61 per cent, who had the least confidence in the economy.

“For Premier Kenney, it’s another ‘what do I do about this now?'” Bourque said. “Let alone management of the pandemic, now he has to face up to a population that feels that things are not going Alberta’s way.”

Among the top financial worries cited by respondents were the value of their investments, the safety of their savings, and being able to pay their bills.

Those were the same top issues in the poll done last February, although the results suggest fewer respondents were worried about those issues overall.

This report by The Canadian Press was first published Jan. 26, 2022.