Hot on the heels of the Uber hacking incident last week, someone claiming to be the hacker behind it now says Rockstar Games has been hacked. As evidence of this, videos of Grand Theft Auto (GTA) 6, which is still in the early stages of development, have been leaked and published online.

The hacker, using a handle of teapotuberhacker and posting to the GTAForums fan forum, claimed to have gained access to Rockstar Games’ Slack server and also its team-working Confluence wiki. As well as making claims to be the same ‘Tea Pot’ hacker who was behind the Uber incident, the threat actor says they had gained access to both GTA 5 and GTA 6 source code along with other assets. To back this up, a file containing some 90 videos was also uploaded.

What GTA 6 videos have been leaked?

Bleeping Computer reports that these videos seem to have been “created by developers debugging various features in the game” and feature Vice City locations as well as conversations with Non-Player Characters (NPCs).

Some of the videos have since been published on YouTube, and, despite the best efforts of Rockstar Games issuing takedown notices, many remain viewable today.

According to that Bleeping Computer report, extortion appears to be the motivation with the threat actor demanding money in return for not publishing the source code to the GTA 6 game.

I have reached out to Rockstar Games for a statement but have not heard back at the time of publication. However, a reporter for Bloomberg, Jason Schreier, has tweeted that “Rockstar sources” have confirmed the GTA 6 leak is real.

I have not been able to contact the threat actor directly, and it’s still a matter of conjecture whether this is, indeed, the same person as was behind the Uber hack. That Slack server access was involved, and the very public, boastful nature of the video postings certainly suggest a similar modus operandi, however.

I will update this article with further information as it becomes available.

iPhone 14 Pro Camera Shaking and Vibrating in Apps Like Snapchat, TikTok, and Instagram for Some Users – MacRumors

The Morning After: The next generation of iPhones may all feature Dynamic Island displays – Yahoo Finance Australia

It’s-a him. Chris Pratt as Mario in the movie. OK, so co-producer Chris Meledandri confirmed back in 2021 that Pratt wasn’t going to use the stereotyped voice of the video game plumber in the upcoming animated Mario film. But on Thursday, Nintendo dropped a highly anticipated teaser trailer for The Super Mario Bros. Movie, and Pratt revealed, kind of, the voice he did choose.

Honestly, the much-anticipated Pratt-as-Mario voice was kind of a letdown. There’s … maybe a faint bit of Italian accent in the few lines Pratt speaks? Or is he just using his normal voice? Pratt’s Mario mostly just reacts to getting the wind knocked out of him as he heads off on his Mushroom Kingdom adventure.

Sure, there was no way Pratt was going to use the exaggerated, stereotypical voice, but so little of him can actually be heard in the teaser it’s tough to say how his Mario will sound. He doesn’t deliver any of Mario’s famed catchphrases — no “It’s-a me, Mario” or “Wahoo!” Maybe more will be revealed when a longer trailer comes along. Regardless, there’s a better chance to hear some of Jack Black’s Bowser (he’s excellent) and a good look at the vibrant animation.

Fans were underwhelmed by Pratt’s voice, or at least what we got to hear of it.

“Everything in the Mario movie trailer looks and sounds absolutely great…except for Chris Pratt’s voice lol,” one viewer tweeted.

Pratt reminded one viewer of Ratso Rizzo in 1969’s Midnight Cowboy. “It was like four words, but I definitely got Dustin Hoffman ‘I’m WALKIN HEAH!’ vibes.”

“It’s been a lifelong dream of mine to be Mario,” Pratt says in a video clip preceding the trailer, relating how he played Mario games on a machine at his childhood laundromat. Good to know, but the jury is still out on how that dream will become a reality.

And after the trailer was published, Pratt tweeted about it, writing, “After playing the games for years as a kid (and adult) I’m excited to bring Mario to all of you! Enjoy!”

The trailer did reveal Jack Black as Bowser, and Keegan-Michael Key as Toad. But some fans were disappointed that the clip didn’t include a clip of Seth Rogen as Donkey Kong, especially the actor’s infamous laugh.

“My only complaint is that we didn’t get to see Seth Rogen’s Donkey Kong voice let alone SOME form of laughter,” one fan wrote.

Movies Coming in 2022 From Marvel, Netflix, DC and More

Movies Coming in 2022 From Marvel, Netflix, DC and More

Last year, Google significantly updated its line of smartphones, introducing the Pixel 6 and 6 Pro models. The devices received a new design and some long-awaited upgrades. Users appreciated the changes, so these smartphones became the most popular among all the Pixels released before that. Today, the company formally presented their successors — the Pixel 7 and Pixel 7 Pro models.

Google decided not to change what works well, so the new generation is an evolutionary continuation of the smartphone line. We were able to evaluate the design of the devices back in the spring, during the I/O 2022 conference. The body of the Pixel 7 and 7 Pro has a familiar design: two Gorilla Glass Victus glass panels and an aluminum frame between them (matte in the Pixel 7 and glossy in the Pixel 7 Pro). The smartphones are protected against moisture according to the IP68 rating and have a coating that does not leave fingerprints. The Pixel 7 is available in Lemongrass, Snow and Obsidian, while the Pixel 7 Pro is available in Hazel, Snow and Obsidian. 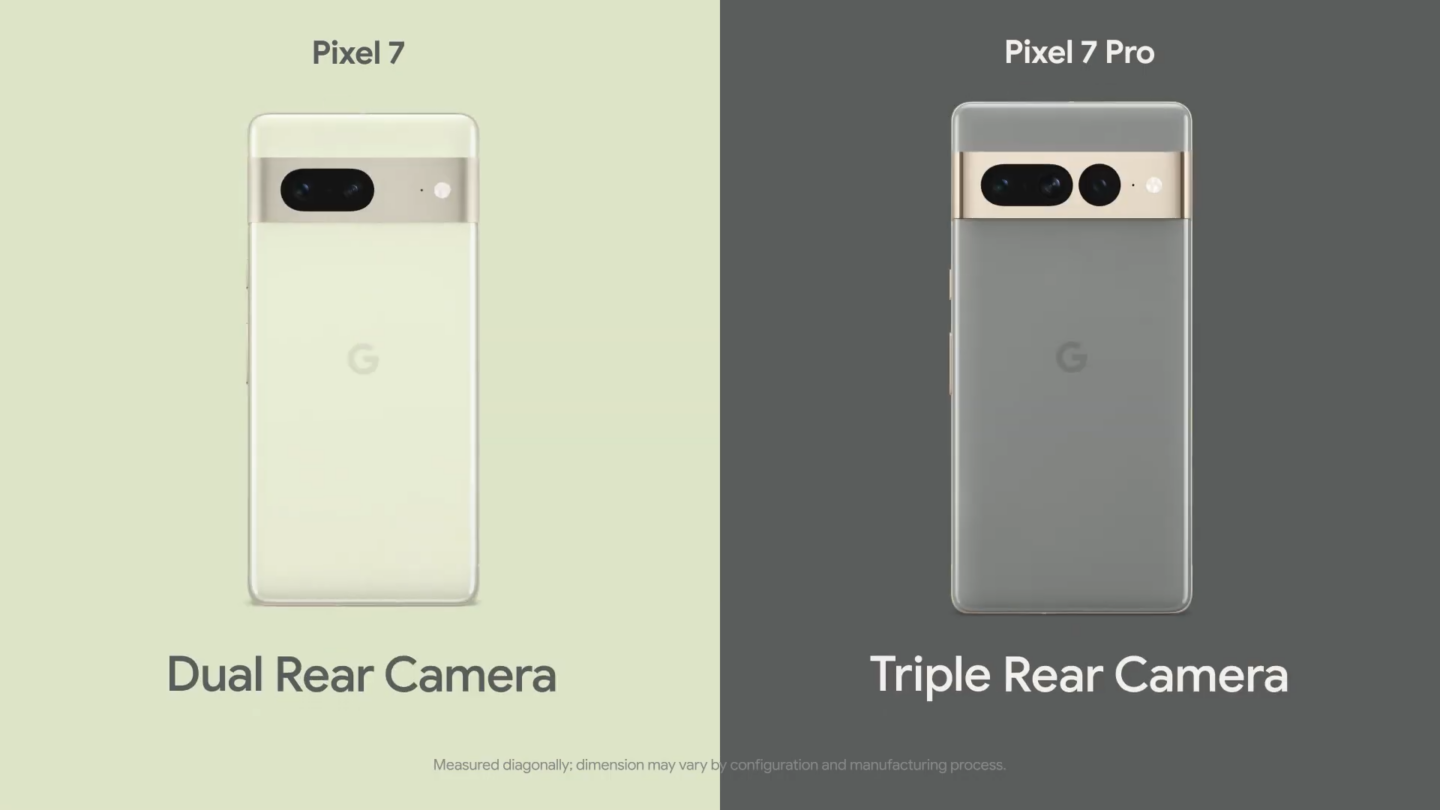 The second difference concerns smartphone cameras. The main module of the devices is identical – 50 MP, f/1.85 aperture, 82° viewing angle, OIS, LDAF. The ultra-wide-angle lens in the Pixel 7 Pro has a wider viewing angle (125.8° vs. 114°) and autofocus, thanks to which the new Macro Focus mode is available exclusively for the Pro model. Although the sensor itself in both smartphones has a resolution of 12 MP and the same f/2.2 aperture. Pixel 7 Pro is additionally equipped with a 48 MP telephoto lens (aperture f/3.5, 20.6° viewing angle), which allows for 5x optical zoom and 30x digital zoom. The front camera in both devices is 10.8 MP, f/2.2 aperture, 92.8° viewing angle. 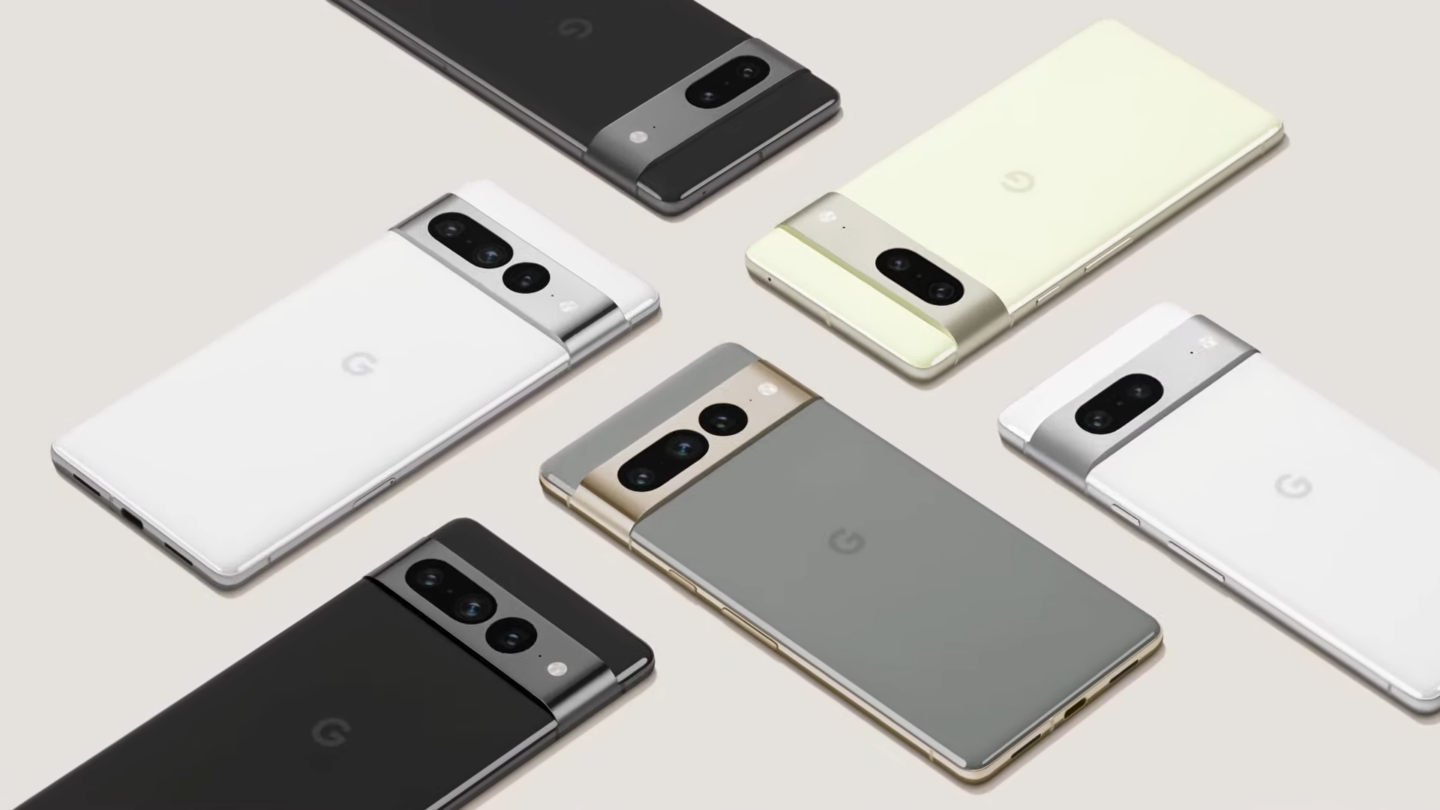 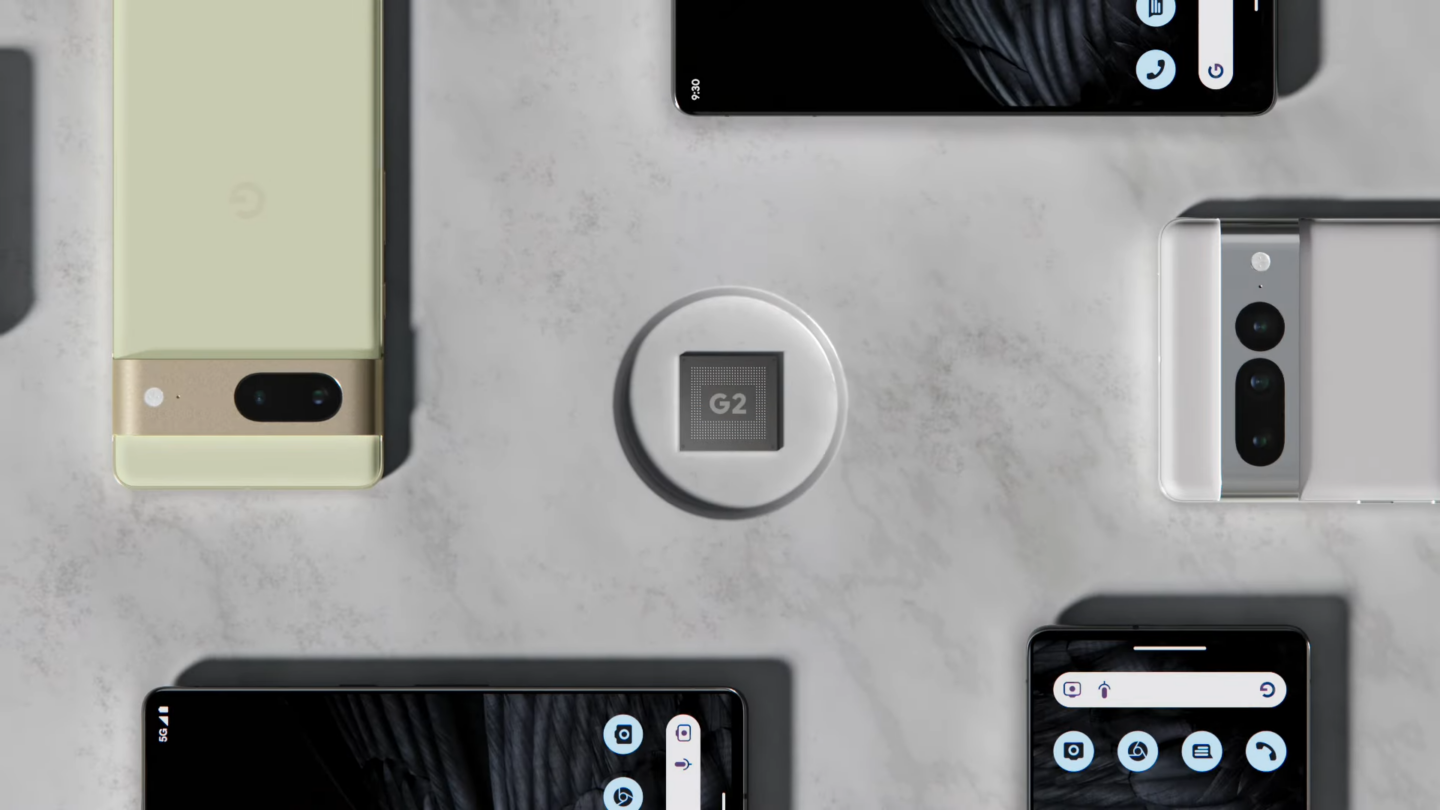 For example, Pixel 7 and 7 Pro can now shoot videos with a bokeh effect (Cinematic Blur), or conversely, make blurry photos clearer (Photo Unblur). Night mode (Night Sight) now processes photos twice as fast. Support for 10-bit HDR appeared, 2x zoom (using a crop from the main 50 MP sensor, by analogy with iPhone 14 Pro) and enhanced video stabilization mode. For people with eyesight problems, Guided Frame mode is now available to help them take good selfies by giving them tips on how to compose the frame. Live Translate, Assistant Voice Typing, and many others have also been improved. 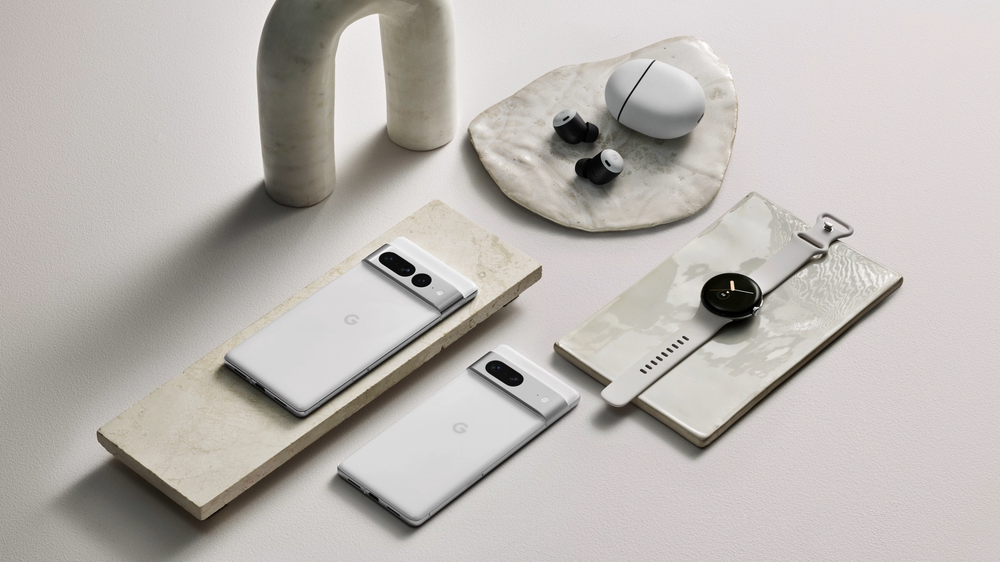 Regarding the other characteristics of the smartphones, I note that the Pixel 7 and Pixel 7 Pro support wired charging with a power of 20 W and 23 W, respectively, as well as wireless charging with a power of 20 W and 23 W, respectively (when using Google Pixel Stand of the second generation) or 12 W (when using other Qi chargers). The fingerprint scanner is built into the display, but Face Unlock is also available. The slot for a physical SIM card remains for all regions, and eSIM is also available. There are Wi-Fi 6E, Bluetooth 5.2, GPS, NFC modules. Pixel 7 Pro additionally has a UWB chip, in particular, for storing and using digital car keys. Traditionally, Pixel smartphones have long-term support, so users can count on 5 years of security patches and Pixel Drop updates for their devices.

There are a lot of different sports betting sites out there, and it can be tough to know which ones are the best.

Each of these sites has its own unique benefits, so be sure to check them all out and see which one is right for you.

The most popular sports betting sites in Canada

There are many popular sports betting sites in Canada, but the most popular ones are:

Each of these sites has its own unique benefits, so be sure to read more on Canadian-sports-betting.com and see which one is right for you.

What are the features of online casino sites?

There are a few key features that all online casino sites should have. First and foremost, they should be licensed and regulated by a reputable gaming commission. This ensures that the games are fair and that the site is operating legally.

Another important feature to look for is a wide selection of games. The best online casino sites will offer a variety of slots, table games, video poker, and more. This gives you plenty of options to choose from, so you can find the perfect game for your mood.

Finally, you’ll want to make sure that the site has good customer support. This way, if you have any problems with your account or with the games, you can get help right away. Good customer support is essential for any online business, so it’s definitely something to look for when choosing an online casino site.

What customer support options are available if you have questions or problems with your account?

The customer support options available for online casino account holders are quite diverse and comprehensive. For starters, most online casinos will have a FAQ section that covers the most commonly asked questions. In addition to this, many online casinos also offer live chat support, which can be extremely helpful if you need assistance with your account or have any other questions.

There are many different ways to bet on sports, but the best sports betting sites will always offer great odds and a wide variety of markets.