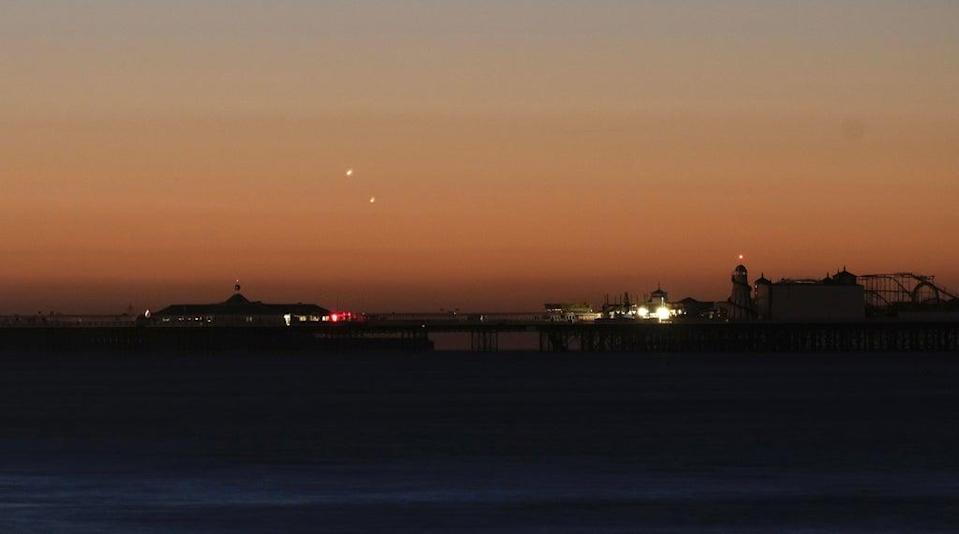 Skygazers are getting the chance to see two bright planets appearing close together despite being millions of kilometres apart.

The cosmic treat shows Venus and Jupiter lined up as they rise above the horizon, and just before the Sun follows after them.

The peak time to see this planetary conjunction, which happens once every few years, was between around 5am and 6am on Saturday but it can still be spotted on Sunday and in the coming days as the planets slowly move apart.

Despite appearing from Earth to be lined up, the planets will not actually be in that position in space.

Dr Robert Massey, deputy executive director of the Royal Astronomical Society, said: “In this particular case you have Venus and Jupiter (appearing) close together and because they are both bright, that’s a nice sight.”

In this particular case you have Venus and Jupiter (appearing) close together and because they are both bright, that’s a nice sight

He said: “It is fun. Is it scientifically important – no not really – but it does provide a nice spectacle.

“I think that the nice thing you can have is that with a single telescope eyepiece you can see the two planets together which is an unusual view.”

A clear eastern horizon is needed to see the event. Buildings, trees and hills will make it much harder to see as they will appear quite low in the sky.

Viewers in the UK will have a harder time of trying to see it than people further south in southern Europe, Africa, or Australia, as the planets will appear to be a lot higher in the sky before sunrise.

Dr Massey said that in the UK “it will be best to stop looking at sunrise so you are not staring at the sun which is bad for your eyes”.

Then once the sun rises, it will be “virtually impossible” to see the event.

Met Office meteorologist Craig Snell said: “Venus and Jupiter will not be visible in the sky until around sunrise on Sunday morning, so by then most of England and Wales will be cloudy.

“There is a small chance the southeast could still have some cloud breaks, but the better chance will be across northern Scotland.”

Biden and Kishida met in Tokyo on Monday to continue discussions around an Implementing Agreement that will potentially place a Japanese astronaut on the Gateway space station. The leaders also reaffirmed each country’s commitment to share data on climate change. The discussion around Gateway personnel is a part of ongoing conversations between the U.S. and Japan regarding NASA’s upcoming missions to the Moon.

Gateway is an integral component of NASA’s larger effort to return to the Moon, a series of upcoming missions known as the Artemis program. Once built, Gateway will serve as a Moon-orbiting outpost offering lunar-bound astronauts support for their visit. The lunar space station, in addition to serving as critical infrastructure for the Artemis missions, will also serve as a staging point for future crewed missions to Mars. The first pieces of the upcoming lunar station are set to launch no earlier than November 2024.

“In recent years, the alliance between Japan and the United States has grown stronger, deeper, and more capable as we work together to take on new challenges—just as important as the opportunities—of a rapidly changing world,” said President Biden in a NASA press release.

Japan and the U.S. are also interested in placing a Japanese astronaut on the surface of the Moon during a yet-to-be-determined Artemis mission, according to a White House fact sheet. NASA is looking to land astronauts on the lunar south pole by 2025, and Artemis will involve the first crewed Moon missions since Apollo 17 in 1972. NASA Administrator Bill Nelson said in the release: “Our shared ambition to see Japanese and American astronauts walk on the Moon together reflects our nations’ shared values to explore space responsibly and transparently for the benefit of humanity here on Earth.”

While the first pieces of Gateway are still a few years away from launch, having the U.S. and Japan team up is an opportunity to get more nations involved. The Artemis missions will be a global effort, and getting back to the Moon represents an exciting next step in space exploration and engineering.

More: This Tiny Moon-Bound Satellite Could Carve a Path For a Lunar Space Station.

A crumbling comet could create a meteor shower on May 30.

The ‘tau Herculids’ meteor display might be one of the most dramatic observed in over two decades, according to Space.com.

Meteor showers occur when dust or particles from asteroids or comets enter Earth’s atmosphere at a very high speed, the U.K. Sun explained.

This one is expected to be the product of a comet named 73P/Schwassmann-Wachmann, also known as SW3.

SW3 was first discovered in 1930 but did not reappear again until the 1970s, Republic World reported.

In 1995, astronomers noticed that the comet’s nucleus split into four smaller chunks, according to CNET.

It has continued to disintegrate more in the ensuing years.

The display is expected to be very visible in the Northern Hemisphere as it is occurring on a Moon-less night.

A consensus of experts predicts that the shower will be visible starting from 1 a.m. EST on May 31.

It is suggested viewers will want to be outside at least an hour before this so your eyes have a chance to adjust to the dark.

“The southwestern USA and Mexico are favored locations as the radiant, the area of the sky where these meteors come from, will be located highest in a dark sky,” Robert Lunsford wrote for AMS.

“The outburst may be seen from southeastern Canada and the remainder of the (eastern) USA, but at a lower altitude.”

Boeing’s crew taxi returned to Earth from the International Space Station on Wednesday, completing a repeat test flight before NASA astronauts climb aboard.

It was a quick trip back: the Starliner capsule parachuted into the New Mexico desert just four hours after leaving the orbiting lab, with airbags attached to cushion the landing. Only a mannequin was buckled in.

Aside from thruster failures and cooling system snags, Starliner appeared to clinch its high-stakes shakedown cruise, 2½ years after its botched first try. Flight controllers in Houston applauded and cheered the bull’s-eye touchdown.

NASA astronauts will strap in next for a trip to the space station. The space agency has long wanted two competing U.S. companies ferrying astronauts, giving it added insurance as it drastically reduced its reliance on Russia for rides to and from the space station.

Elon Musk’s SpaceX is already the established leader, launching astronauts since 2020 and even tourists. Its crew capsules splash down off the Florida coast; Boeing’s Starliner returns to the U.S. Army’s expansive White Sands Missile Range in New Mexico.

Boeing scrapped its first attempt to reach the space station in 2019, after software errors left the capsule in the wrong orbit and nearly doomed it. The company fixed the flaws and tried again last summer, but corroded valves halted the countdown. Following more repairs, Starliner finally lifted off from Cape Canaveral last Thursday and docked to the space station Friday.

Station astronauts tested Starliner’s communication and computer systems during its five days at the space station. They also unloaded hundreds of kilograms of groceries and other supplies that flew up in the Boeing capsule, then filled it with empty air tanks and other discarded gear.

A folded U.S. flag sent up by Boeing stayed behind, to be retrieved by the first Starliner crew.

“We’re a little sad to see her go,” station astronaut Bob Hines radioed as the capsule flew away.

Along for the ride was Starliner’s test dummy — Rosie the Rocketeer, a takeoff on the Second World War’s Rosie the Riveter.

The repairs and do-over cost Boeing nearly $600 million US.