This fall’s iPad models are rolling out a little later this year, and the most budget-friendly version is getting more expensive. Apple on Tuesday announced updates to its iPad and iPad Pro lineup, and the entry-level iPad got a long-awaited redesign with USB-C to match the rest of the lineup, but with a price bump to $449 and up. The new iPad also now comes in four colors, familiar-looking blue and silver, and also very bold yellow and pink versions.

The iPad Pro, meanwhile, has gotten a spec bump to the company’s latest M2 processors. The iPad Pro lineup was last updated in spring 2021 with M1 processors and 5G support, while the entry-level iPad was updated last fall.

The 10th-gen entry-level iPad adds an A14 chip and USB-C, and arrives Oct. 26 — it can be preordered now. But it doesn’t work with the Pencil 2: Instead, it uses the Pencil 1 with a USB-C adapter. The entry model doesn’t have a Smart Connector, but it has a new optional Magic Keyboard Folio accessory with a kickstand that costs a steep $249. The price of the iPad’s also gone up: The entry-level Wi-Fi model costs $449 (£499, AU$749), and only comes with 64GB of storage; there’s a step-up 256GB model for $150 more that almost feels mandatory.

The increased cost of the most affordable iPad isn’t a welcome change in a bad economy, but Apple is still selling last year’s entry iPad model (which starts at $329).

One of the best features on the new entry-level iPad looks to be a shifted front-facing camera. It’s now on the landscape side, where it should be, so video calls won’t seem off-center. The new iPad Pro, however, still has the front-facing camera in the portrait orientation.

The iPad line had been expected to get upgrades, and the news matches expectations for the most part, even the camera aspect.

The 2022 iPad Air, released this past spring, also added an M1 processor. Apple is leaning on its M1 processors in iPadOS 16.1 by supporting external monitors with multitasking through a feature called Center Stage, but iPadOS 16.1 still hasn’t been released yet and has so far felt very buggy in its public beta.

Silent Hill 2 Remake Has ‘Seamless’ Gameplay With No Loading Screens

One Pokemon Scarlet and Violet fan has shared a funny video that shows a Psyduck appearing out of nowhere to startle a player who was snapping a photo. Pokemon Scarlet and Violet are among the best selling titles of the year, despite the mixed reviews from fans and critics globally. The gameplay and multiplayer mode of the latest Pokemon games receive praise and backlash for the myriad performance issues.

Because of these technical problems, Pokemon Scarlet and Violet are getting review bombed, but some fans are embracing them. Glitches are common in the latest titles, and players have reported seeing some truly bizarre things in their playthroughs. Some gamers have seen a grotesque glitch in Pokemon Scarlet and Violet, whereas a random Psyduck bug is also common. Psyduck makes the headlines again after a player spotted it in rather unusual circumstances.

Reddit user metronn uploaded a video that shows their funny encounter with the duck Pokemon. The user intended to photograph a scenic view of Pokemon Scarlet and Violet‘s region of Paldea. Paldea is a brand-new area introduced in Pokemon Scarlet and Violet, which is based on the Iberian peninsula and has diverse geographic features like mountains, forests, and several lakes. In the video, the player attempts to take a picture of a serene place on the shoreside of a water body, with mountains in the background and water flowing peacefully.

After successfully capturing one side of the scenery, the player slowly moves the camera to show the surrounding areas and a few fish pocket monsters in the body of water. As the camera moves, something unusual is seen in the bottom right corner of the screen, which appears to be another Pokemon. This turns out to be a Psyduck, who appears out of nowhere and is standing right next to the user, who was seemingly unaware of its presence. The original poster is understandably startled by seeing the Psyduck, who apparently photobombed their efforts to take a beautiful picture in Pokemon Scarlet and Violet.

Since its introduction in the first generation, Psyduck has established itself as one of the most famous Pokemon of all time. It has featured in almost every Pokemon game from each generation until the current ninth-gen games, Pokemon Scarlet and Violet. Psyduck is not the strongest or the fastest pocket monster, but still, it has millions of fans around the world who are excited to see it in unusual circumstances.

The new iPad Pro with M2 chip takes performance another step forward, but what all has changed from the previous-gen iPad Pro? Follow along for an in-depth look at what’s the same and what’s new when comparing the M2 iPad Pro vs M1 iPad Pro to help you decide what’s the best choice.

In 2021, the 11 and 12.9″ iPad Pro arrived with the powerful M1 chip, Thunderbolt connectivity, 5G for cellular models, new camera features like Center Stage, and more.

Now the 2022 M2 iPad Pro lineup brings a number of tweaks and changes, but many of them are quite minor which could push customers toward the M1 iPad Pro or even iPad Air.

Below we’ll break down all the fine details of the M2 iPad Pro vs M1 iPad Pro. We’ve also got a full comparison of the new entry-level iPad and more:

The main difference between the new and old iPad Pro is the upgrade from an M1 to M2 chip.

Outside of the slight boost in CPU and GPU performance, all the other specs like storage, RAM, Thunderbolt connectivity, and 5G remain the same between the new and old iPad Pro models.

Just like the M1 12.9″ iPad Pro, the M2 12.9″ iPad Pro is the only one that features the Liquid Retina XDR display with miniLED backlighting.

There appears to be just one difference between the new M2 11 and 12.9″ iPad Pro display and the M1 versions – the new Apple Pencil Hover feature.

Some small upgrades with the M2 iPad Pro include Bluetooth 5.3 and WiFi 6E.

Interestingly, the new iPad Pro models didn’t get a Magic Keyboard Folio as the iPad 10.

The 2022 iPad Pro models with M2 chip feature the same battery life as their predecessors:

Storage remains the same between the old and new iPad Pro models. And pricing – original MSRP pricing – is also unchanged. However, keep an eye out for M1 iPad Pro discounts with the new models now available.

On the back, you get a 12MP ultra wide lens with Center Stage support.

Strangely, while the iPad 10 got a handy Landscape ultra wide front camera, the iPad Pro retains the front camera on the top (short side) bezel.

Size and weight are identical between the M2 iPad Pro and M1 iPad Pro according to Apple:

Color choices remain the same with silver and space gray.

When considering all the similarities between the M2 iPad Pro and M1, you’ll probably only want to pick up the new model if you’re a pro with workflows that will benefit from the M2 chip/ProRes support or you’re just okay with spending the money on the latest and greatest from Apple.

The M2 iPad Pro is available at Apple, Amazon, Best Buy, BH Photo, and more with stock looking good across the board.

When you can get the vast majority of the M2 iPad Pro feature set with the M1 iPad Pro and the processor difference not being an issue for most users, picking one up at a discount will probably be a popular move.

Also, don’t forget the iPad Air offers a compelling package at an even cheaper price than the last-gen iPad Pro. That is if you’re okay with the 11-inch size.

Pokémon Scarlet and Violet may have been making headlines for all the wrong reasons due to its poor performance, many bugs and poor-quality visuals, but that hasn’t stopped them from selling gangbusters.

The Nintendo Switch titles made up 96% of the top 10 physical sales in Japan for its launch week, became the biggest physical launch for any games in the UK this year and sold 10 million units (physically and digitally) in just three days.

A statement from Nintendo reads: “Nintendo announced today that global sales of the Pokémon Scarlet and Pokémon Violet games for the Nintendo Switch family of systems have surpassed 10 million combined units in the first three days since their worldwide launch on Nov, 18, 2022.

“This is the highest global sales level for any software on any Nintendo platform within the first three days.”

The latest entries in the series push the franchise forward by moving to a proper open-world map, having online co-operative features, multiple main quests that you can tackle in any order, and the ability to send your Pokémon out to fight without getting into proper battles. 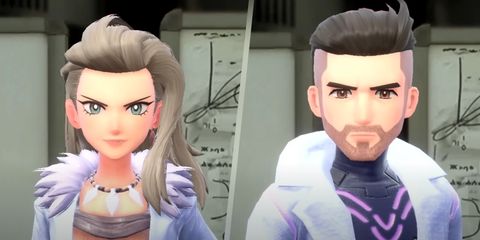 However, many reviews have noted that the games suffer with an awfully low frame-rate, extreme amounts of pop-in and low quality environments, whilst fans have been documenting glitches from invisible character models, characters going giant, running twice as fast with two controllers paired to the Switch, climbing up cliffs by jumping backwards, and many more.

Pokémon Scarlet and Violet are out now on Nintendo Switch.

Save on selected Samsung Galaxy S22+ contracts with Sky

Save on selected SIM-only deals with EE

Looking for a PS5? Visit our stock guide