(Bloomberg) — Australia’s Treasurer Josh Frydenberg said the economy is proving resilient despite the impact the coronavirus is having on its biggest trading partner, China.

Treasury is monitoring the effects of the outbreak on tourism and education and the consequences of international supply chains being disrupted, Frydenberg said in an interview with Bloomberg TV on Sunday at the G-20 in Riyadh.

“We will continue to monitor the situation, but we do know that the Australian economy is remarkably resilient,” he said.

Australia is among a string of nations that has banned people from entering the country from mainland China due to the virus, and its National Security Committee is reviewing the restrictions on a weekly basis. The ban has meant more than 100,000 Chinese students have been unable to start university classes in Australia this term — a significant hit for the A$38 billion ($25 billion) education sector as just over a quarter of new foreign students come from China.

The epidemic is another headwind for Australia, already struggling with the fallout from a summer of devastating wildfires and a crippling drought. China is a key destination for exports of energy, metals and agricultural products and Australia is the world’s most China-dependent developed world economy.

Frydenberg acknowledged about a third of Australia’s exports go to China. But he said the government had diversified its trading relationships, reaching agreements with Indonesia, Japan and Korea and by supporting the Trans-Pacific Partnership. (Bloomberg) — Mounting concern over semiconductor demand is sending shudders through North Asia’s high-tech exporters, which historically serve as a bellwether for the international economy.

Fading tech demand highlights a darkening picture as Russia’s war on Ukraine and rising interest rates damp activity. The following charts look at the chip industry and its implications for the world economy.

Gartner Inc. predicts an abrupt end to one of the industry’s biggest boom cycles. The research firm slashed its outlook for revenue growth to just 7.4% in 2022, down from 14% seen three months earlier. Gartner then sees it falling 2.5% in 2023.

Memory chips are among the most vulnerable segments in the $500 billion semiconductor market to global economic performance, and Samsung and SK Hyinx’ sales of dynamic random access memory, or DRAM, a chip that holds bits of data, are central to Korean trade.

Next year, demand for DRAM is likely to rise 8.3%, the weakest bit growth on record, says tech researcher TrendForce Corp., which sees supply climbing 14.1%. Bit growth refers to the amount of memory produced and serves as a key barometer for global market demand.

South Korea’s exports are bolstered when demand outpaces supply in bit growth. But with supply likely to expand at almost twice the pace of demand next year, exports may be headed for a major downturn.

Signs are rising that trade is already starting to deteriorate. Korea’s technology exports slipped in July for the first time in more than two years, with memory chips leading the falls. Semiconductor inventories piled up in June at the fastest pace in more than six years.

Among potential victims will be Samsung, the world’s biggest memory-chip producer and a linchpin of Korea’s trade-reliant economy.

Samsung recorded rapid sales growth when demand was strong relative to supply. As the chip outlook turns gloomy, shares of Samsung have been declining this year, with occasional rebounds on better-than-expected profits.

Samsung and SK Hynix control roughly two thirds of the global memory market, meaning they have the power to narrow the gap between supply and demand.

Memory is loosely tied to other types of semiconductors, built by firms such as TSMC that produces chips in iPhones, and Nvidia, whose graphics cards are used in everything from games to crypto mining and artificial intelligence.

The Philadelphia Semiconductor Index, which includes these firms, has ebbed and flowed together with memory demand in recent years.

Korean exports have long correlated with global trade, meaning their decline will add to signs of trouble for a world economy facing headwinds from geopolitical risks to higher borrowing costs.

Korea’s stock market has been among leading indicators of the country’s trade performance, with investors dumping shares well before exports slump.

The International Monetary Fund last month downgraded its global growth forecast and said 2023 may be tougher than this year.

Deutsche Bank AG sees a U.S. recession starting in mid-2023 and Wells Fargo & Co. expects one in early 2023. A Bloomberg Economics model sees a 100% probability of a US recession within the next 24 months. 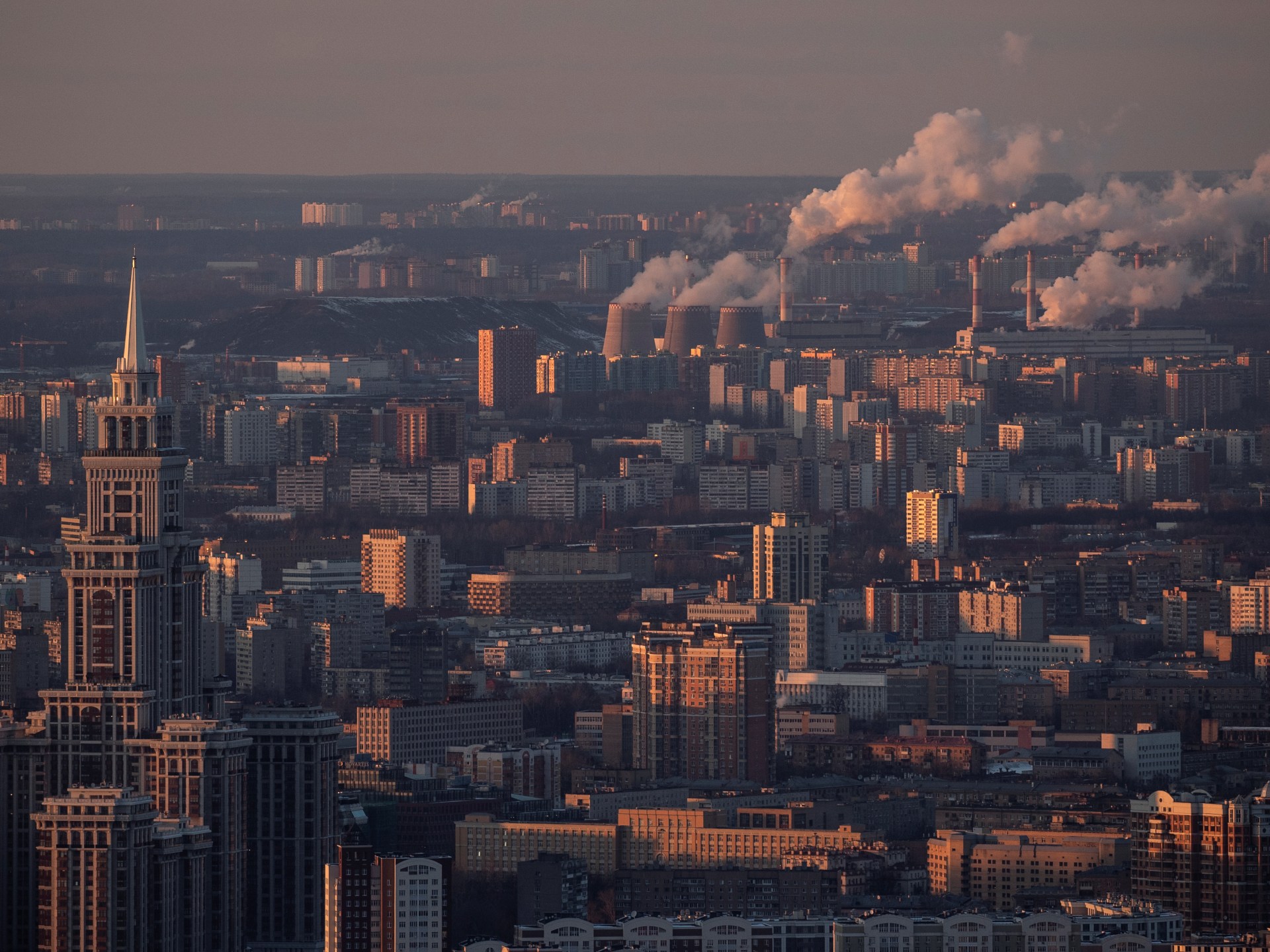 Economy ministry says gross domestic product to shrink 4.2 percent this year amid sanctions over the war in Ukraine.

Russia’s economy will contract less than expected and inflation will not be as high as projected three months ago, economy ministry forecasts showed, suggesting the economy is dealing with sanctions better than initially feared.

The economy is plunging into recession after Moscow sent its armed forces into Ukraine on February 24, triggering sweeping Western curbs on its energy and financial sectors, including a freeze of Russian reserves held abroad, and prompting scores of Western companies to leave.

Yet nearly six months since Russia started what it calls a “special military operation”, the downturn is proving to be less severe than the economy ministry predicted in mid-May.

At one point, the ministry warned the economy was on track to shrink by more than 12 percent, in what would be the most significant drop in economic output since the fall of the Soviet Union and a resulting crisis in the mid-1990s.

The ministry now sees 2022 year-end inflation at 13.4 percent and unemployment of 4.8 percent compared with earlier forecasts of 17.5 percent and 6.7 percent, respectively.

GDP forecasts for 2023 are more pessimistic, though, with a 2.7 percent contraction compared with the previous estimate of 0.7 percent. This is in line with the central bank’s view that the economic downturn will continue for longer than previously thought.

The economy ministry left out forecasts for prices for oil, Russia’s key export, in the August data set and offered no reasons for the revision of its forecasts.

Li Keqiang calls on provinces to bolster growth after consumption and output fall short of expectations.

China’s Premier Li Keqiang asked local officials from six key provinces that account for about 40% of the country’s economy to bolster pro-growth measures after data for July showed consumption and output grew slower than expectations due to Covid lockdowns and the ongoing property slump.

“Only when the main entities of the market are stable can the economy and employment be stable,” Li was cited as saying at the meeting in a front-page report carried in the People’s Daily, the flagship newspaper of the Communist Party.

The meeting came after Monday’s surprise interest-rate cut did little to allay concern over the property and Covid Zero-led slowdown. Economists have warned of even weaker growth and have called for additional stimulus, such as further cuts in policy rates and bank reserve ratios and more fiscal spending.

Li acknowledged the greater-than-expected downward pressure from Covid lockdowns in the second quarter and asked the local officials to strike a balance between Covid control measures and the need to lift the economy. “Only by development shall we solve all problems,” Li said, according to the broadcaster.

Indicating China may resort to more local debt issuance to pump-prime the economy, Li said “the balance of local special bonds has not reached the debt limit” and the country should “activate the debt limit space according to law,” according to the People’s Daily report.

Based on the government budget, local authorities may be able to issue an estimated 1.5 trillion yuan ($221 billion) of extra debt and bonds this year to support infrastructure spending, after top leaders urged better use of the existing debt ceiling limit in a key July Politburo meeting. The arrangement could be approved in August, according to some analysts.

China’s 10-year government yield rose for the first time this week, up one basis point to 2.64% from the lowest in more than two years.

Li urged local governments to accelerate the construction of projects with sound fundamentals in the third quarter to drive investment, the report said, and also asked officials to expand domestic consumption of big-ticket items such as automobiles and support housing demand.

He also stressed the importance of opening up the domestic market to foreign investors, noting that the six major provinces — Guangdong, Jiangsu, Zhejiang, Henan, Sichuan and Shandong — account for nearly 60% of the country’s total foreign trade and foreign investment.

“Opening up is the only way to make full use of the two markets and resources and improve international competitiveness,” Li was cited as saying.