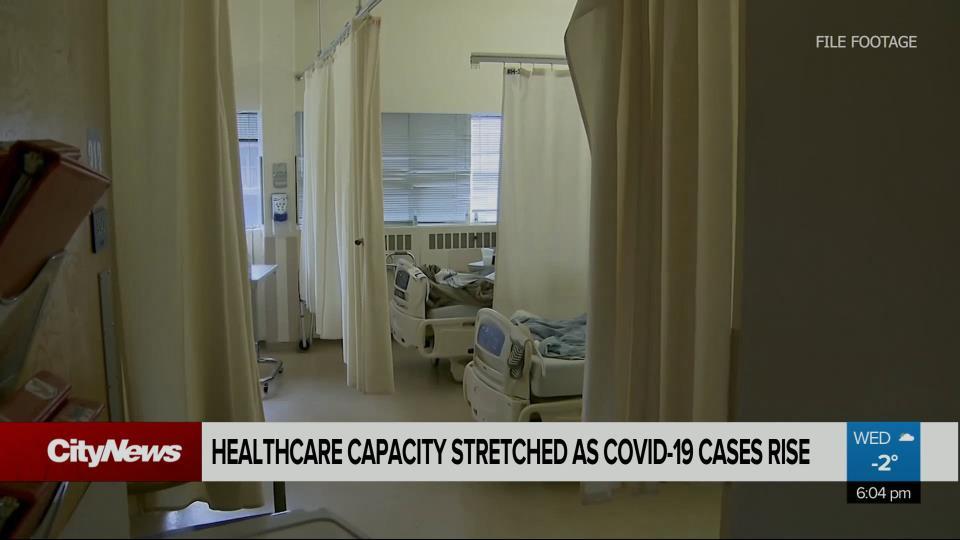 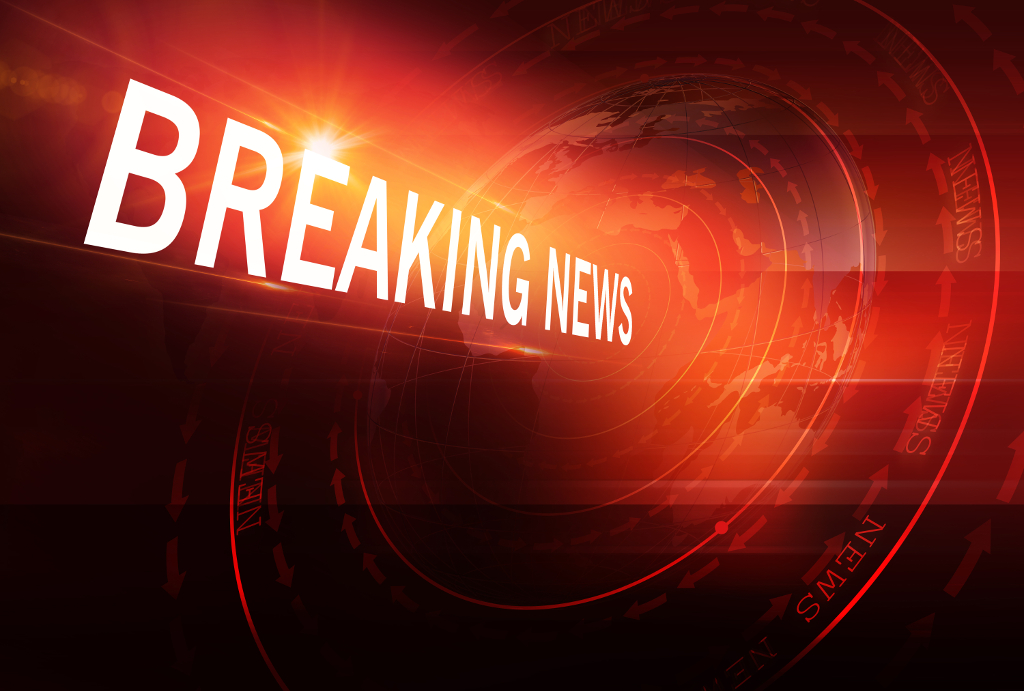 Ontario is reporting 1,707 new cases of COVID-19 today, and seven new deaths due to the virus.

The province also reported 299 new COVID-19 cases related to schools, including at least 253 among students.

Those bring the number of schools with a reported case to 737 out of Ontario’s 4,828 publicly funded schools.

In the province’s long-term care homes, 743 residents currently have COVID-19 and six new deaths have been reported today.

The province says 109 of its 626 long-term care homes are experiencing an outbreak.

Despite the fact Peel Region and Toronto are in lockdown, and Hamilton, Waterloo, Durham, Halton and York are facing stricter regulations, the number of new COVID-19 cases remains high.

According to the Ontario Health Coalition (OHC), between October 31 and November 18, the number of people infected in workplace outbreaks far exceeds the general community spread of the virus in the following workplace sectors: construction; schools and daycares; retail, restaurants and entertainment; and public services.

The number of cases in schools has increased by 1,865 cases for a cumulative total of 4,265 cases among students and education workers, as well 639 cases in childcare settings–this represents an 86.9-per-cent increase, the largest increase among workplace sectors.

Based on these findings, the number of work-place related cases has increased by 39.74 per cent in non-health-care settings during this three-week period.

Additionally, during the week of November 18, 35.4 per cent of new cases couldn’t be traced back to a source.

The number of cases with an unknown source of exposure has continued to increase during the second wave, as Public Health Units in hotspots have been unable to keep up with contact tracing. 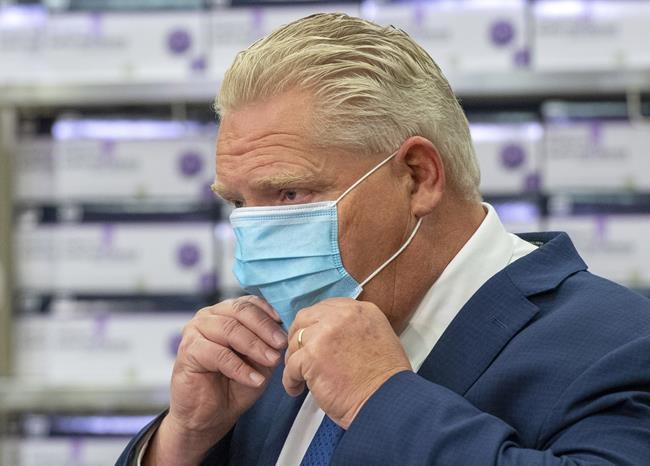 Ontario Premier Doug Ford puts his mask back on during the daily briefing at Humber River Hospital in Toronto on Tuesday November 24, 2020. Ford says he wants a clear delivery date for the province’s share of COVID-19 vaccines, stressing that “the clock is ticking” when it comes to fighting the novel coronavirus. THE CANADIAN PRESS/Frank Gunn

TORONTO, Kan. – As some provinces push for clarity on when they will receive their share of Canada’s COVID-19 vaccines, one expert says the government should be more transparent about the terms of its contracts with the companies making the shots.

Kerry Bowman, who teaches bioethics and global health at the University of Toronto, says it’s likely Ottawa doesn’t have the information the provinces are seeking regarding the timing and quantity of vaccine deliveries, particularly if its contracts with drugmakers are conditional.

But he says if that’s the case, the federal government should state it clearly or risk eroding public trust in its system.

Bowman says that while news that COVID-19 immunizations could begin in some countries in a matter of weeks is good for Canada in the long term, it will lead to widespread frustration in the near future if the country is lagging behind.

As well, he says any delay in immunization translates to more COVID-19 cases and deaths, and mounting economic strain.

Ontario Premier Doug Ford renewed his calls Monday for a clear delivery date for the province’s share of vaccines, stressing that “the clock is ticking” when it comes to fighting the novel coronavirus.

Ford said he was set to speak to Pfizer, one of the drugmakers that has entered into an agreement with Canada, Monday afternoon but expected to be told the information must come from Ottawa.

The premier cited reports that other countries, such as the United Kingdom, are on track to start COVID-19 immunizations soon, adding Ontarians “need answers.”

Meanwhile, the American biotech company Moderna said Monday the first 20 million doses of its COVID-19 vaccine will be shipped to the United States next month.

The chairman of the American vaccine maker told the CBC on Sunday that Canada is near the front of the line to receive the 20 million doses it pre-ordered, confirming that the country’s early commitment to purchasing the shots means it will get its supply first.

Moderna is one of several companies to have already submitted partial data to a “rolling review” process offered by Health Canada. Rather than presenting regulators with a complete package of trial results, the would-be vaccine makers file data and findings as they become available. Canada has been looking at Moderna’s first results since mid-October.

The issue of when Canada will receive its orders came to the forefront last week when Prime Minister Justin Trudeau said the country will have to wait a bit because the first doses off the production lines will be used in the countries where they are made.

The federal government was pressed on the matter further during Monday’s question period, as some MPs called for greater transparency regarding vaccine rollout, noting other countries such as Australia have made their plans public.

Health Minister Patty Hajdu said the government has been working with the provinces and territories to ensure the plan is robust.

“Canada is well-served by the diversity of vaccines we have purchased early and in fact in great quantity. Canadians can be assured they too will have access to these vaccines that will bring us to the end of COVID-19,” she said.

Ontario and Quebec, the two provinces with the bulk of COVID-19 cases, reported 1,746 and 1,333 new infections respectively, as well as eight and 23 new deaths related to the virus.

In Manitoba, health officials stressed residents must limit their contact with others in order to bring down the numbers, as the province reported 342 new cases and 11 additional deaths.

The provincial government imposed strict measures on business openings and public gatherings more than two weeks ago, but officials said the test positivity rate remains at 13 per cent.

Nunavut, however, will begin to lift the lockdown measures it enacted in mid-November on Wednesday, as more people recover from the illness.

Only Arviat, which has 86 active cases, will continue to be in lockdown for at least another two weeks, with travel restrictions in place, Nunavut officials said.

Out east, six new infections have been recorded in New Brunswick today, while Newfoundland and Labrador reported one.

On Sunday, the federal government announced it will extend a series of travel restrictions meant to limit the spread of COVID-19 into January, in light of the steady rise in case counts across the country.

Public Safety Minister Bill Blair and Hajdu said in a statement the measures, which were first enacted near the start of the global health crisis, would be in effect until Jan. 21, 2021, for travellers entering Canada from a country other than the United States.