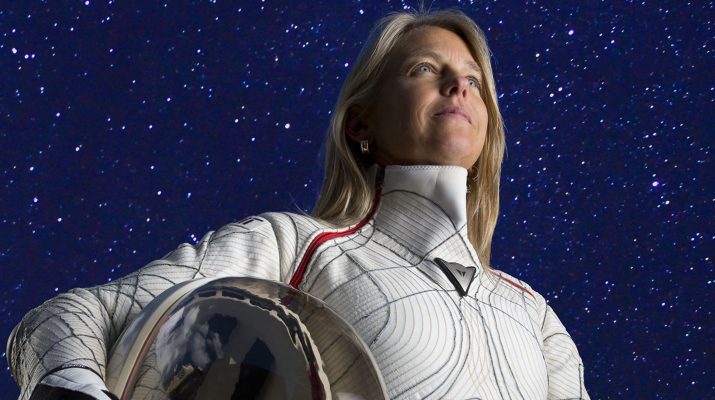 MIT’s famous Media Lab, the multidisciplinary idea factory that produces many a fascinating invention and influential thinker, has found a new director in its backyard after scouring the globe for candidates. Dava Newman, MIT professor of aeronautics and astronautics and former deputy administrator of NASA under Obama, will helm the intellectual hub.

The Media Lab is famed for its freewheeling techno-intellectual prowess, but for more than a year has been leaderless following the resignation of former head Joi Ito. Ito resigned when it was discovered that billionaire and alleged child sex trafficker Jeffrey Epstein had given funding and reportedly received special treatment and access to the Media Lab under his leadership.

The ensuing leadership search no doubt looked for, if not exactly new blood (Newman has been involved with MIT for decades) then certainly a break from the past. Out of 60 candidates, they interviewed 13 and ended up picking Newman for a variety of reasons.

“In a field of outstanding candidates, Professor Newman stood out for her pioneering research, wide range of multidisciplinary engagements, and exemplary leadership. She is a designer, a thinker, a maker, an engineer, an educator, a mentor, a convener, a communicator, a futurist, a humanist and, importantly, an optimist,” wrote Dean Hashim Sarkis in a letter announcing the appointment.

Coincidentally (or is it?), Newman just last week was a speaker at TC Sessions: Space, where she seemed to give a preview of her new responsibilities talking about the importance of inclusion in major efforts like NASA’s Artemis.

“It’s going to bring the scientists and engineers together, but we need the artists, we need the designers, they’re the visionaries,” she said. (If you missed the event, you can watch this and all our other panels on Extra Crunch.)

Newman seems to be starting off the job by emphasizing one of the best qualities a leader should have: listening to the people she’ll be leading.

“I plan to start by doing a lot of listening and learning,” she said in the MIT announcement. “I like to meet people where they are, and to encourage them to put all their great ideas on the table. I think that’s the best way to go forward, working with the whole community — faculty, students and staff — to tap into everyone’s creativity. I can’t wait to get started.”

'Christmas Star': Photos from the planetary conjunction of Jupiter and Saturn – haveeruonline

Fossilized bone fragments found in Neuquén Province in northwest Patagonia could belong to a new species of Titanosaur, a sauropod family of dinosaurs including some of the largest terrestrial animals to ever walk on Earth.

Titanosaurian sauropods were the most diverse and abundant large-bodied terrestrial herbivores in the Southern Hemisphere landmasses during the Cretaceous, a geological period that lasted from about 145 to 66 million years ago. Their fossils have been discovered on all continents and titanosaur species comprise approximately one-third of known sauropods. Some taxa are regarded as the most massive terrestrial animals known to science, whereas others were apparently no heavier than modern cattle.

The recovered remains are not a complete skeleton, and consist mainly of pelvic bones and vertebrae, and could belong to a previously unknown species. There are some similarities to fossils belonging to Andesaurus, a type of “super-sized titanosaur” which existed during the middle of the Cretaceous Period in South America. These large sauropods grew to be 18 meters (or 60 feet) long. Based on the size of the new remains, the authors suggest that this species was far larger, easily exceeding Andesaurus in size, maybe even bigger than the largest known Titanosaurian sauropods, the Patagotitan and Argentinosaurus. Patagotitan, described in 2014, is believed to have weighed almost 60 tons, reached lengths of over 31 meters (102 feet). Argentinosaurus is one of the largest known land animals of all time, with length estimates ranging from 30 to 40 meters (100 to 130 feet) and weight estimates from 50 to 100 tons.

Body size and mass estimation of the sauropod dinosaurs is generally tricky, as many species are known only from fragmentary remains. Based on the recovered fossils, the new species likely far exceeded a mass of 40 tons, however, only with further fossil discoveries a more accurate size estimation may be possible. The research was published in the journal Cretaceous Research.

The largest animal ever to have existed on Earth remains the modern blue whale. Living in the sea and not limited by gravity as much as land-dwelling animals, it can reach a maximum length of 33.5 meters and weigh 173 tons.

Dinosaur fossils could belong to the world's largest ever creature – msnNOW

Experts have uncovered the remains of a gigantic dinosaur in Argentina, and believe it could be one of the largest creatures to have ever walked the Earth.


Paleontologists discovered the fossilized remains of a 98 million-year-old titanosaur in Neuquén Province in Argentina’s northwest Patagonia, in thick, sedimentary deposits known as the Candeleros Formation.

The 24 vertebrae of the tail and elements of the pelvic and pectoral girdle discovered are thought to belong to a titanosaur, a diverse group of sauropod dinosaurs, characterized by their large size, a long neck and tail, and four-legged stance.

In research published in the journal Cretaceous Research, experts say they believe the creature to be “one of the largest sauropods ever found” and could exceed the size of a Patagotitan, a species which lived 100 million to 95 million years ago and measured up to a staggering 37.2 meters (122 feet) long.

© Nobumichi Tamura/STKRF/AP Photo/Stocktrek Images
The newly discovered dinosaur is thought to have a body mass exceeding or comparable to an Argentinosaurus, which measured up to 40 meters and weighed up to 110 tons.


“It is a huge dinosaur, but we expect to find much more of the skeleton in future field trips, so we’ll have the possibility to address with confidence how really big it was,” Alejandro Otero, a paleontologist with Argentina’s Museo de La Plata, told CNN via email.

Titanosaur fossils have been found on all continents except Antarctica. But the biggest “multi-ton” varieties of the species — including those titanosaurs exceeding 40 tons — have mostly been discovered in Patagonia.

Without analyzing the dinosaur’s humerus or femur, experts say it is not yet possible to say how much the creature weighs. However, the partially recovered dinosaur “can be considered one of the largest titanosaurs,” experts said, with a probable body mass exceeding or comparable to that of a Patagotitan or Argentinosaurus.

Patagotitans may have been the world’s largest terrestrial animal of all time, and weighed up to 77 tons, while Argentinosaurus were similarly gargantuan, and measured up to 40 meters (131 feet) and weighed up to 110 tons — weighing more than 12 times more than an African elephant (up to 9 tons).

Experts believe that the specimen strongly suggests the co-existence of larger titanosaurs together with medium-sized titanosaurs and small-sized rebbachisaurids at the beginning of the Late Cretaceous period, which began 101 million years ago.

“These size differences could indeed explain the existence of such sauropod diversity in the Neuquén Basin during the Late Cretaceous in terms of niche partitioning,” they wrote.

Researchers said that, while they don’t believe the creature to belong to a new species, they have so far been unable to assign it to a known genus of dinosaur.

The research was conducted by Argentina’s The Zapala Museum, Museo de La Plata, Museo Egidio Feruglio and the universities of Río Negro and Zaragoza.

QUEBEC CITY, Jan. 19, 2021 (GLOBE NEWSWIRE) — Icentia Inc., a leading Canadian technology company—specialised in cardiac ambulatory monitoring—will be providing a new home-based service nationwide that will enable patients with heart rhythm disorders to have access to an ambulatory cardiac test from the safety of their homes while the pandemic surges on.

Icentia enables at-home tests through its CardioSTAT® device, a Canadian designed and manufactured, proven alternative to traditional Holter monitor tests. Since its introduction in 2015, the CardioSTAT test has become the tool of choice for hundreds of physicians across Canada and the United Kingdom for the detection of heart rhythm disorders. This inventive and life-saving solution is now being implemented nationally for at-home tests in much needed times.

As the pandemic rages on, wait times in the Canadian healthcare system are becoming a serious issue. Backlogs for all procedures, including ECG monitoring, continue to grow. Social distancing and contamination risk requirements have increased the burden on hospitals and clinics, bolstering the demand for home-based tests. “The pandemic is forcing our healthcare system to evolve and adapt. This smart and accurate cardiac monitoring technology is what Canadians need right now to stay safe and keep healthy,” explains Dr. Marko Mrkobrada, Internist, London Health Sciences Centre, London, ON.

This new home-based solution, where no visit to health care facility for hook up or device return is required, promises to lighten the load on medical staff while also increasing safety for all. “We are glad to relieve some of the pressure on our healthcare system and to contribute to more safety through our home-based, patient-initiated tests. CardioSTAT test, which has proven to be easy to use, reliable and safe over the past years, makes even more sense in today’s context,” says Icentia CEO Pierre Paquet.

The CardioSTAT test relies on a unique single-use electrocardiography monitoring device designed to be comfortably worn on the upper chest for up to 14 days. It has the potential to reduce lead times to diagnosis, while providing the patient with a greatly improved experience. Quick and easy to install, it avoids the inconvenience and discomfort caused by multiple skin adhesive electrodes wired to Holter monitors. The result is a highly efficient, yet comfortable and very discrete, wire-free cardiac monitor that does not restrict patients from showering or doing physical activity. Upon complete analysis of the recording by Icentia, results are reviewed by a certified cardiologist before being reported to the patient’s prescribing doctor. For more information, visit cardiostat.com.

Based in Canada, Icentia is a combined medical device and service company. Icentia pioneers innovative solutions for healthcare institutions in the field of medical testing. Icentia aims to help healthcare institutions in becoming more efficient while providing patients with the ease, comfort, peace of mind and safety of reliable at-home medical monitoring through technological advances. For more information, visit icentia.com.