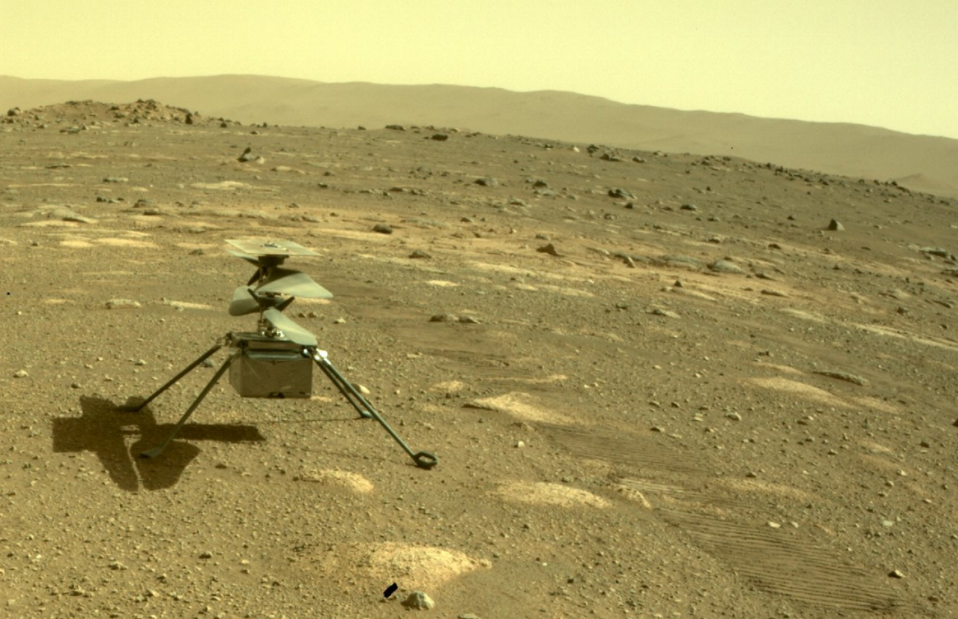 A battery-powered NASA helicopter which hopes to become the first vehicle to make a powered flight on another planet has survived its first test – a freezing night on Mars.

The four-pound Ingenuity helicopter was deployed on the surface by NASA’s Perseverance rover, having previously been attached to the rover’s belly.

Evening temperatures at Jezero Crater can plunge to minus 90C.

This can freeze and crack unprotected electrical components and damage the onboard batteries required for flight.

Ingenuity will be the first aircraft to attempt powered, controlled flight on another planet.

Read more: Mysterious “rogue planet” could be even weirder than we thought

MiMi Aung, Ingenuity project manager at NASA’s Jet Propulsion Laboratory in Southern California, said: “This is the first time that Ingenuity has been on its own on the surface of Mars.

“But we now have confirmation that we have the right insulation, the right heaters, and enough energy in its battery to survive the cold night, which is a big win for the team. We’re excited to continue to prepare Ingenuity for its first flight test.’

The Perseverance rover was instructed to move away from Ingenuity shortly after deploying it – so that the solar array atop the helicopter’s rotors could begin getting sunlight as soon as possible.

Until the helicopter put its four legs onto the Martian surface, Ingenuity remained attached to the belly of the rover, receiving power from Perseverance.

The rover serves as a communications relay between Ingenuity and Earth, and it will use its suite of cameras to observe the flight characteristics of the solar-powered helicopter from Van Zyl Overlook.

The helicopter carries no science instruments; its only mission a technology demonstration, is to conduct flight tests in the thin atmosphere of Mars.

Within 30 Martian days, or sols (a Martian day is 24.6 hours), on the surface, Ingenuity will complete its testing, and Perseverance’s scientific exploration of Jezero Crater will kick into high gear.

“Whatever the future holds, we will acquire all the flight data we can within that timeframe.”

On April 4, Perseverance downlinked the first of the images of the helicopter on the surface of Mars.

Taken by the rover’s rear left Hazard Avoidance camera, the image shows the helicopter’s rotor blades still stacked in alignment on top of each other (a configuration used to save room during the trip to Mars) and its four footpads firmly planted into the surface of Mars.

For the next two days, Ingenuity will collect information about how well the thermal-control and power systems perform now that the small helicopter is standing on its own in the Mars environment.

That information will be used to fine tune Ingenuity’s thermal-control system to help it survive the harsh Mars nights through the entire flight experiment period.

To intervene or not to intervene? That is the future climate question – Science Daily

The first footprints were found in a dry lake bed in White Sands National Park in 2009. Scientists at the U.S. Geological Survey recently analyzed seeds stuck in the footprints to determine their approximate age, ranging from around 22,800 and 21,130 years ago.

The findings may shed light on a mystery that has long intrigued scientists: When did people first arrive in the Americas, after dispersing from Africa and Asia?

Most scientists believe ancient migration came by way of a now-submerged land bridge that connected Asia to Alaska. Based on various evidence — including stone tools, fossil bones and genetic analysis — other researchers have offered a range of possible dates for human arrival in the Americas, from 13,000 to 26,000 years ago or more.

The current study provides a more solid baseline for when humans definitely were in North America, although they could have arrived even earlier, the authors say. Fossil footprints are more indisputable and direct evidence than “cultural artifacts, modified bones, or other more conventional fossils,” they wrote in the journal Science, which published the study Thursday.

“What we present here is evidence of a firm time and location,” they said.

Based on the size of the footprints, researchers believe that at least some were made by children and teenagers who lived during the last ice age.

David Bustos, the park’s resource program manager, spotted the first footprints in ancient wetlands in 2009. He and others found more in the park over the years.

“We knew they were old, but we had no way to date the prints before we discovered some with (seeds) on top,” he said Thursday.

Made of fine silt and clay, the footprints are fragile, so the researchers had to work quickly to gather samples, Bustos said.

“The only way we can save them is to record them — to take a lot of photos and make 3D models,” he said.