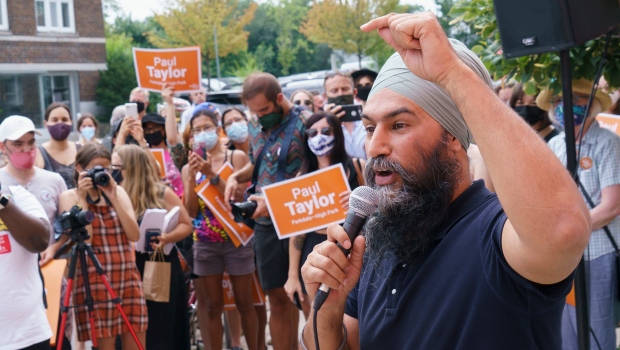 TORONTO —
Among the short clips of new dance moves and funny cats, NDP Leader Jagmeet Singh is amassing a large following of young voters with videos about his party’s platform on TikTok ahead of the federal election on Sept. 20.

In one video, Singh plays a trendy sound clip from TikTok’s library of songs, voices and funny noises in which the voice of a man asks “why are you smiling like that?” Dancing to some background music, Singh points to the space above him, where messages such as “taxing the Super Rich so we can invest in people” and “building homes you can actually afford” appear in orange text.

In another, Singh and his spouse Gurkiran Kaur Sidhu do a TikTok dance in front of the steps to the NDP campaign plane, with the caption “on our way to fight for people!”

With each federal election, more and more native social media users are turning 18 and becoming eligible to vote. And increasingly, Canadian politicians are harnessing the power of different social media platforms to spread their message.

“The election is a hot topic on TikTok right now,” TikTok marketing expert Wave Wyld told CTV News Channel on Saturday. “All you have to do is go to the hashtags of any of the party leaders and you will see that it has millions of views.”

Wyld said social media is something all political parties should use in elections, especially with so many young Canadians frequently glued to their phones. None of the other party leaders currently have TikTok, but are active on other social media platforms such as Twitter and Instagram.

“Make those connections and showcase how relatable you are, and really get younger voters out to the polls,” she said.

Wyld noted that part of Liberal Leader Justin Trudeau’s success in the 2015 federal election came from connecting to young voters via social media — back when other leaders were not using it to the same extent. Wyld said this shows how social media can be crucial in converting a large internet following into actual votes.

“Jagmeet Singh is really tapping into this audience and encouraging and connecting with those voters to get a vote,” Wyld said.

As to whether or not participation on TikTok could alienate older voters who might see the trendy videos as pandering, Wyld said the increasing usage of social media in politics is almost unavoidable.

“The future of social media is huge,” she said. “Social media marketing and political campaigns play into that. I don’t think that they can really ignore it.”

As ‘finfluencers’ spread through social media, beware the pitfalls – The Guardian

Before you start off your weekend full of sunshine, cooler weather and pumpkin patch adventures, catch up on some of this week’s news headlines from the Okanagan-Shuswap region.

Woman found dead at Highway 33 and Nickel Road in Kelowna

Kelowna RCMP launched an investigation after the body of a woman was found at Highway 33 and Nickel Road in the city.

Police said they don’t have much information surrounding the woman’s death or the cause of it, but the investigation is ongoing.

Fundraisers set up for family of Penticton murder victim

Fundraisers have been set up for a Penticton murder victim’s family.

Taig Savage’s mother, Tracey, previously lost two other children in a house fire. The goal of the fundraisers is to support her as she goes through losing a child in a tragic way for the third time.

One dead in Vernon shooting

One person died and another person was taken into police custody after a morning shooting in Vernon on Monday (Sept. 20).

Vernon North Okanagan RCMP said the victim and the man in custody are known to each other. As he is still in custody, police said there is no further threat to public safety.

Boaters have been asking the City of Salmon Arm to dredge the channel that leads into Shuswap Lake, but the mayor and his staff say that the high costs and government requirements to dredge are keeping them from doing it.

Staff added that dredging is a temporary solution and has a short life span.

And that’s all for this week. Have yourself a good and safe weekend.

Ryan Blackburn shares his thoughts on the third day of player interviews for media week that included Aaron Gordon, Will Barton, Jeff Green, Austin Rivers, and Michael Porter Jr. in a stacked session. Gordon was chill, Barton was excited, Green was professional, Rivers was insightful, and Porter showed readiness to take the leap. Then, Ryan discusses the ESPN player rankings that are filtering out and what they had to say about the Nuggets and Nikola Jokić.

The European Commission hopes to mandate USB-C on smartphones, Texas is being sued over a new law for social media platforms, and FedEx completes its first fully autonomous vehicle delivery.

EU proposes mandatory USB-C on all devices, including iPhones from technology

The European Commission has announced plans to mandate a USB-C charging port on smartphones and other electronics. The goal is to reduce the number of chargers users need to buy, thus reducing electronic waste. Although it isn’t directly targeted at Apple, the mandate will affect the company the most. Apple still uses its own Lighting connector for its flagship smartphones, including their recently announced iPhone 13 series. As more laptops and smartphones switch to USB-C, calls for Apple to drop the Lightning port have grown as well. Notably, the Commission’s plan only targets wired charging, meaning the requirement does not apply to a device that exclusively uses wireless charging.

Texas is being sued by groups representing Facebook, YouTube, and Twitter over a new bill that would prevent these platforms from banning users based on their political views. The law, called House Bill 20, bars social media platforms with over 50 million monthly users in the U.S. from banning users for their viewpoints. Additionally, the law also requires social media companies to file a public suspension report biannually. The reports must detail content removal and account suspensions. Supporters say the goal of the bill is to increase transparency and ensure that users are treated fairly. Despite this, the lawsuit claims that the government cannot force the social media platforms to host content that goes against their terms of service. A law of similar nature that sought to deplatform politicians for their viewpoints was struck down this past June in Florida.

Finally, FedEx has announced that it completed its first delivery run using an autonomous truck. The route stretched 500 miles round trip between Houston and Dallas. The success of the trip signals that the delivery company in Texas will begin using more autonomous vehicles in the not so distant future. The truck, which was developed by truck maker PACCAR and autonomous driving company Aurora, uses LiDAR, radar and various other sensors to drive safely on highways. [Business Insider]

That’s all the tech news that’s trending right now. Hashtag Trending is a part of the ITWC Podcast network. Add us to your Alexa Flash Briefing or your Google Home daily briefing. Make sure to sign up for our Daily IT Wire Newsletter to get all the news that matters directly in your inbox every day. Also, catch the next episode of Hashtag Tendances, our weekly Hashtag Trending episode in French, which drops every Friday at 3 pm. If you have a suggestion or tip, please drop us a line in the comments or via email. Thanks for listening, I’m Jori Negin-Shecter.