The heads of the Donetsk and Lugansk People’s Republics, Denis Pushilin and Leonid Pasechnik, as well as the leaders of Kherson and Zaporizhzhia Regions, Vladimir Saldo and Evgeny Balitsky, signed the accession treaties together with Putin at Friday’s ceremony.

The move follows official requests by the Donetsk and Lugansk People’s Republics, as well as the two southern Ukrainian regions, which declared independence, to join Russia. All four territories held referendums on the issue between September 23 and 27, which saw overwhelming support for the move, according to the results announced earlier this week by the local election committees.

“This is the will of millions of people. People living in Luhansk, Donetsk, Kherson region and Zaporizhzhia region are becoming our compatriots forever. People came to the referendum and made their choice to be with their historical motherland, Russia.

These people carried love for their historical homeland in their hearts and passed it on to their children. Welcome home! We became stronger because we are together. The truth is behind us, and truth means strength, and thus victory. Victory will be ours,” said Putin.

The signing ceremony marked the start of the formal process of accession, which will entail the treaties being reviewed by the Constitutional Court and by both chambers of the Parliament.

Biden also cited that the US would sanction anyone providing political or economic support to Russia and would sign a bill providing an additional US$12 billion to prop up Ukraine’s government and military.

In addition, United Kingdom (UK) Prime Minister, Liz Truss, said the regions of Donetsk, Lugansk, Kherson and Zaporizhzhia will continue to be regarded as part of Ukraine.

“The UK will never accept the regions of Donetsk, Lugansk, Kherson and Zaporizhzhia as anything other than Ukrainian territory. We will not hesitate to take further action, including imposing more sanctions to cripple Putin’s war machine,” said Truss.

This item is part of Watching Washington, a regular dispatch from CBC News correspondents reporting on U.S. politics and developments that affect Canadians.

Colorado is the latest state to apply for a licence to import medicines from Canada, the most recent development in a politically sensitive cross-border issue.

This week the state announced that it asked the U.S. Food and Drug Administration (FDA) for permission to import 112 medicines from Canada including EpiPens and drugs for cancer, asthma, multiple sclerosis, diabetes and other ailments.

Because those drugs are cheaper in Canada, the state projects that importing them would save Coloradans an average of 65 per cent per drug.

“This exciting step means we are closer to savings for Coloradans,” Gov. Jared Polis said in a statement.

The context is sky-high drug prices. Americans pay more than residents of other countries for medicine, in some cases multiple times more.

That’s in part due to national regulations: Other countries have stricter rules for setting maximum prices and negotiating those with drug companies.

The U.S. has taken limited steps to address this; Years ago it introduced an optional coverage plan for seniors that allowed price negotiations, and the just-passed Inflation Reduction Act includes several cost-saving measures.

The pharmaceutical sector lobbied hard against price controls. The health sector outspent every other U.S. industry in lobbying last year, with drug companies especially funding lawmakers who voted against such reforms.

Some U.S. states have taken up another idea: free trade in medicine. Why not just import drugs from abroad?

Six U.S. states have passed laws allowing imports of medicine from abroad, particularly from Canada, and now Colorado is the second of those, after Florida, to have formally requested authorization from the FDA.

It’s applying under a process established by the FDA in 2020. But no state has received an approval yet, as the process is complicated. To help explain the rules, the FDA issued a compliance guide this year.

The reason this matters to Canadians can be summed up in nine letters: shortages.

It’s already a problem: shortages occur constantly and, particularly, at present, scores of drugs are in short supply in both Canada and the U.S.

Ottawa has intermittently voiced fears for years about the potential for the gargantuan U.S. market gobbling up Canadian supplies and clearing out pharmacy shelves.

The Paul Martin government introduced a bill in Parliament in 2005 to bolster the health minister’s ability to freeze exports in the case of a shortage. That government fell soon thereafter, the bill never passed, and the issue remained mostly dormant for years.

But talk of importation has resurfaced in U.S. states lately. And Ottawa resumed its talk of export bans: the Trudeau government, in 2020, drafted regulations to better monitor potential shortages and restrict foreign sales of affected products.

The issue now rests with the FDA. It must approve import requests. That’s in addition to complicated requirements that would have to be fulfilled by the businesses importing and exporting.

There are complex rules for industry in both countries.

On the export side — the Canadian government says Canada’s laws require companies to retain records proving that cross-border drug sales won’t cause shortages.

Federal regulations, as well as Canadian food and drug law, allow the government to then intervene to prevent shortages.

On the import side: the current U.S. import process, introduced in 2020, contains numerous hoops American buyers must jump through.

To be eligible for import, a product requires the necessary Canadian labelling; the seller must be licensed to sell drugs wholesale by Health Canada; the seller must also be registered with the FDA as a foreign seller; and the U.S. importer must be a wholesale distributor or pharmacist licensed in the U.S.

Then there are various testing and security requirements for shipments.

The Canadian government says it’s still working with the U.S. to understand the FDA’s plans for implement drug importation.

To date, says the Canadian Embassy in Washington, no state plans have been approved by the FDA. 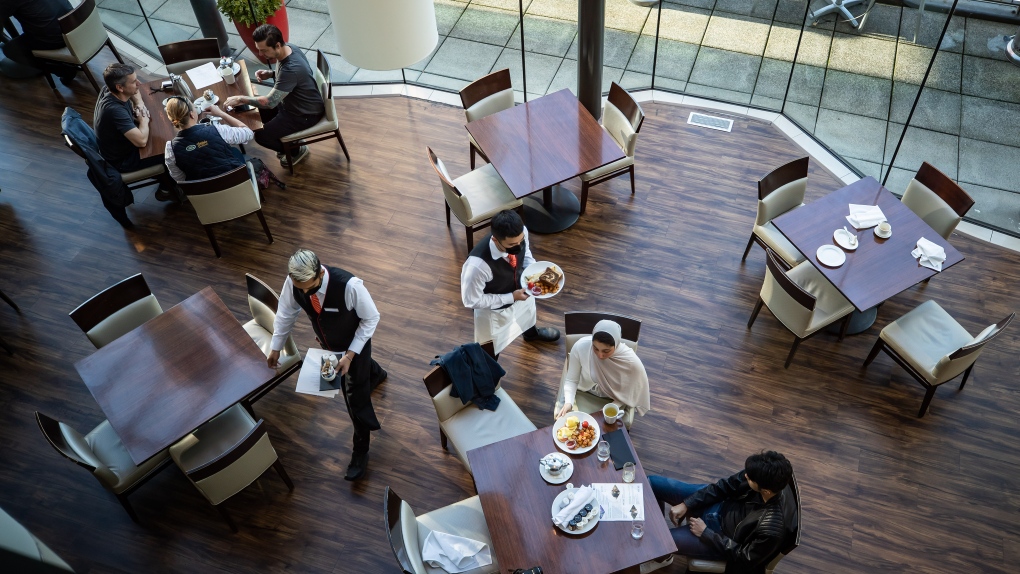 A new list by OpenTable shows the 100 “most beloved” Canadian restaurants in 2022, based on more than one million reviews.

The restaurant reservation company says it analyzed reviews and ratings by diners who used its service from Oct.1, 2021, to Sept. 30, 2022. The list was determined by overall rating, user-based “klout,” total number of reviews and regional overall rating.

“We’re seeing a strong interest in a variety of dining establishments and experiences this year, and strong representation from traditional continental to diverse international cuisines,” said Matt Davis, Country Director at OpenTable, in a news release.

Ontario dominates the list with 49 restaurants, followed by Alberta with 23, British Columbia with 18, Quebec with nine and New Brunswick with one.

These are top 100 restaurants featured by OpenTable, listed in alphabetical order:

“It’s not like Ottawa is a national government,” Smith told the house at 12:30 a.m. Thursday.

Notley, speaking to reporters, said, “At 12:30 last night when she thought nobody was listening, the veil was lifted and Danielle Smith’s interest in genuinely pursuing initial steps toward separation were revealed.

“(They) demonstrate that her view is actually that which is aligned with these fringe separatist wannabes like folks who drafted the Free Alberta Strategy.

“Those comments are utterly chaos-inducing.”

The authors of the paper argue that federal laws, policies and overreach are mortally wounding Alberta’s development.

They urge a two-track strategy to assert greater autonomy for Alberta within Confederation, while simultaneously laying the policy and administrative groundwork to transition Alberta to separation and sovereignty should negotiations fail.

The strategy was the genesis for Smith’s controversial sovereignty bill that stipulates the Alberta legislature, rather than the courts, can pass judgment on what is constitutional when it comes to provincial jurisdiction.

During question period, Smith rejected accusations the bill is a separatist Trojan Horse, noting its intent is contained in the title.

“The name of the bill is Alberta Sovereignty Within a United Canada Act,” said Smith.

“When you start to deny the legitimacy of the federal government, that is part of the worrying trend that ties all of this to the convoy movement and the separatists,” said Wesley, with the University of Alberta.

“Albertans need to know those comments are inappropriate and misleading at best and sparking a national unity crisis at worst. Sooner or later, someone’s going to believe her.”

Wesley added that there is a sentiment among a small group of people in Alberta, including the premier, who “are just tired of losing and don’t want to play the game anymore,” he said.

“The sad thing is that that game is democracy and the rule book is the Constitution, and they’re just ignoring all of it now.”

“She is confusing the European Union with Canada,” said Bratt, with Mount Royal University in Calgary. “Canada is not made up of sovereign provinces. We share sovereignty between orders of government.”

Political scientist Lori William, also with Mount Royal University, said the comment “betrays a profound lack of understanding of Canada, of federalism, of what powers belong to the federal and provincial governments.”

During question period, Smith waved away Opposition demands that she refer the bill to Alberta’s Court of Appeal to determine if it is onside with the Constitution.

Smith told the house that Justice Minister Tyler Shandro, a lawyer, wrote the bill and that the government received independent advice from constitutional lawyers to ensure it was not offside.

“The constitutionality of this bill is not in question,” Smith said.

The bill was introduced by Smith a week ago as centrepiece legislation to pursue a more confrontational approach with Prime Minister Justin Trudeau’s government on a range of issues deemed to be overreach in provincial areas of responsibility.

It was a short, brutish ride for the bill.

Smith’s government, due to a public outcry, had to bring in an amendment just days after introducing the bill to reverse a provision that gave it ongoing emergency-type powers to unilaterally rewrite laws while bypassing the legislature.

Alberta’s First Nations chiefs have condemned the bill as trampling their treaty rights and Smith’s Indigenous relations minister has said more consultation should have been done.

“There is no impact on treaty and First Nations’ rights. That’s the truth,” she said.

Law professor Martin Olszynski said the bill remains problematic because it must be clear the courts have the final say on interpreting the Constitution in order to stabilize the checks and balances of a democratic system.

He said Smith’s bill threatens that, perhaps putting judges in the awkward position of having to decide whether they are the ones to make those decisions.

“Can that judge exercise their judicial function without being affected by that very politicized context?” said Olszynski, with the University of Calgary.

“It essentially politicizes the judicial process.”

This report by The Canadian Press was first published Dec. 8, 2022.