The 71-year-old Rutherford cited “personal reasons” in making the decision. He was under contract through the 2021-22 season.

Rutherford arrived in Pittsburgh in the summer of 2014 following the team’s second-round flameout against the New York Rangers.

Following an uneven first season in which the Penguins made little headway under head coach Mike Johnston, Rutherford’s rebuild picked up steam in December 2015 when he replaced Johnston with Mike Sullivan and created a roster around stars Sidney Crosby and Evgeni Malkin built on speed.

The Penguins won consecutive Stanley Cups in 2016 and 2017, the first team in a generation to successfully defend its championship. Rutherford’s resignation comes with Pittsburgh off to a solid 4-2-1 start.

“It has been a great honour to serve as general manager of the Penguins, and to hang two more Stanley Cup banners at PPG Paints Arena,” Rutherford said in a statement.

“I have so many people to thank, beginning with the owners, Ron Burkle and Mario Lemieux, and team president David Morehouse. There always has been so much support from everyone involved with the Penguins, both on the hockey and business staffs, and, of course, from a special group of players led by Sidney Crosby.”

Morehouse, the Penguins president and CEO, called Rutherford, a journeyman goaltender during his 13-year NHL career before becoming one of the most successful executives of the 21st century “an amazing representative of the Pittsburgh Penguins and he’ll always have a special place in our team’s history, his own legacy.”

The ebullient and relentlessly upbeat Rutherford joined the Hartford Whalers in 1994 and was general manager in 2006 when the franchise — which relocated from Hartford to Raleigh, North Carolina, in 1997 and became the Carolina Hurricanes — won its only Stanley Cup in 2006.

Rutherford moved to Pittsburgh in June 2014, tasked with trying to reverse the Penguins’ fortunes. Crosby and Malkin guided the Penguins to the Stanley Cup Final in 2008 and 2009, losing to Detroit in ’08 before edging the Red Wings in a rematch the following year. The success, however, faded and the team parted ways with general manager Ray Shero and replaced him with Rutherford.

Early in his tenure Rutherford raised eyebrows by putting a timetable on his involvement. He quickly walked it back, however, and Pittsburgh sprinted to a pair of championships with a group built on speed and grit, much of it developed in the farm system or via trade under Rutherford’s watch. He was inducted into the Hockey Hall of Fame in 2019.

Allvin has been a fixture in the Penguins organization since 2006, beginning as a scout before eventually serving as the director of scouting from 2017-20 before being promoted to assistant general manager last November.

The Toronto Blue Jays‘ big free-agent catch, George Springer, along with president and CEO Mark Shapiro, general manager Ross Atkins and manager Charlie Montoyo, will address the media Wednesday as the star outfielder is introduced after signing a six-year, $150-million contract with the club.

Note: If video doesn’t appear above at the scheduled time, please refresh the page. 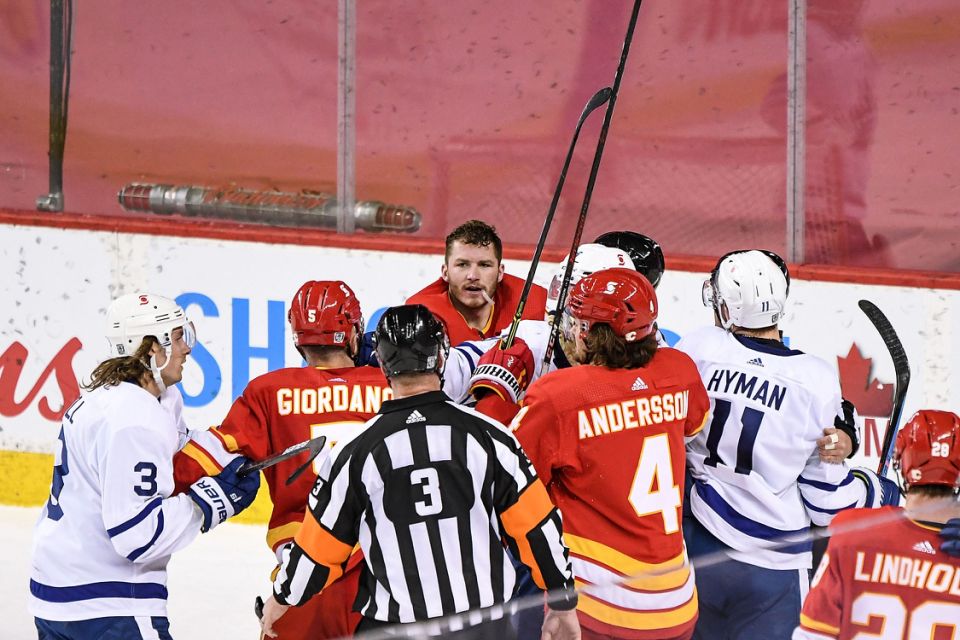 For 60 complete minutes there was, perhaps predictably, little-to-no response from the Toronto Maple Leafs in their return clash with the Calgary Flames following Matthew Tkachuk’s contact with now-injured backup netminder Jack Campbell in their previous engagement two days ago. With no code enforced, the Flames forward wasn’t pressured into a fight with Wayne Simmonds or Zach Bogosian, and was instead provided the opportunity to simply play his game.

But just as the Leafs secured their third and fourth points from the two-game road set in Calgary, there was a perfectly subtle, savvy and veteran effort to acknowledge both Tkachuk’s presence and wrongdoings.

It appeared totally innocuous, but Leafs defender Jake Muzzin clearly connected with a nerve when he flipped a perfectly-weighted puck at a kneeled Tkachuk, which landed softly in his lap just as the buzzer finished sounding to end the game.

Failing to appreciate how easy he was let off in the game in that moment, or perhaps just incensed with the result, Tkachuk lost his mind in response to the perceived disrespect, trying desperately to confront Muzzin.

But after failing to accomplish anything with his initial contact with the howling Leafs defender, all he managed to do was make a mess of the game, coming up short in his attempts to work back through the mess of uninterested parties.

Tkachuk then took out his frustration at the Flames bench while his teammates patiently waited for the outburst to conclude.

For Muzzin and the Leafs, it couldn’t have worked out better. Tkachuk was largely a non-factor in the game and wasn’t given the chance to earn respect by fighting a bigger and stronger opponent to atone for his role in the Campbell incident, like he has several times previously in his career.

Instead he’ll have to stew on the incident, the outburst and the jokes online for nearly another month before the two teams finally meet again.

Then we’ll see if he’s the one looking for payback.