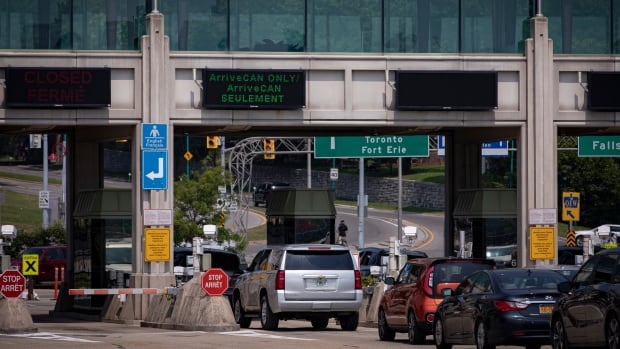 The United States is expected to extend its border restrictions with Canada for another 30 days.

A source with direct knowledge of the situation tells CBC News that American officials are expected to make the announcement tomorrow.

The U.S. border has been closed to non-essential travel since March 2020. The restriction, which does not cover trade or travel by air, has been rolled over several times since then. The current restrictions are set to expire on Aug. 21.

The U.S. is currently dealing with spiking numbers of COVID-19 cases due to the delta variant.

To qualify, Americans must have received all required doses of a Health Canada-approved COVID-19 vaccine 14 days prior to entering Canada, and only U.S. citizens and permanent residents residing in and travelling from the United States are allowed in.

Americans must submit their travel information — including vaccination documents — using the ArriveCAN app or by registering online within 72 hours before their arrival.

The Federal Court of Appeal says it will uphold all but one of the rules that bolster compensation for air passengers subjected to delayed flights and damaged luggage.

Air Canada, Porter Airlines and several other parties had argued that the passenger rights charter launched in 2019 violates global standards.

The appellants argued the charter should be rendered invalid for international flights.

But the court has ruled to dismiss the appeal, aside from the regulation that compensates passengers for the temporary loss of baggage.

The daughters of an Indigenous woman police believe to have been the victim of a serial killer were on Parliament Hill this morning, calling on the federal government to take action.

Police believe Morgan Harris and three other Indigenous women in Winnipeg were murdered by the same man, who has been charged with four counts of first-degree murder.

Winnipeg police also say they think three of the victims’ bodies may be in a landfill, but they don’t plan to do a search because the area is too large.

The chief of Long Plain First Nation, where two of the four victims are from, is calling for resources for her community such as a 24-7 safe space for women.

Harris’s daughters also say if police won’t conduct a search to find their mother, they will.

Doctors say influenza spread is starting to hit older adults as surveillance levels indicate the hospitalization rate of seniors is not that far behind that of children.

Data from the Public Health Agency of Canada for the week ending Nov. 26 show that children under five still made up the highest number of hospitalized flu patients, but the rate at which people 65 years of age and older are hospitalized is also rising.

Hospitalizations among both young children and seniors have increased sharply over recent weeks during a flu season that started earlier than usual.

Bogoch says there’s a perfect storm of a monster influenza season without enough people getting the flu shot, while hospitals are overstretched.

Dr. Matthew Oughton, an infectious diseases specialist at Jewish General Hospital in Montreal, says in most years, children tend to get the flu first and then bring it home to parents and grandparents — and that hospitals in his province are on the cusp of seeing that impact.

Both doctors are urging people to get the shot, saying it’s not too late.