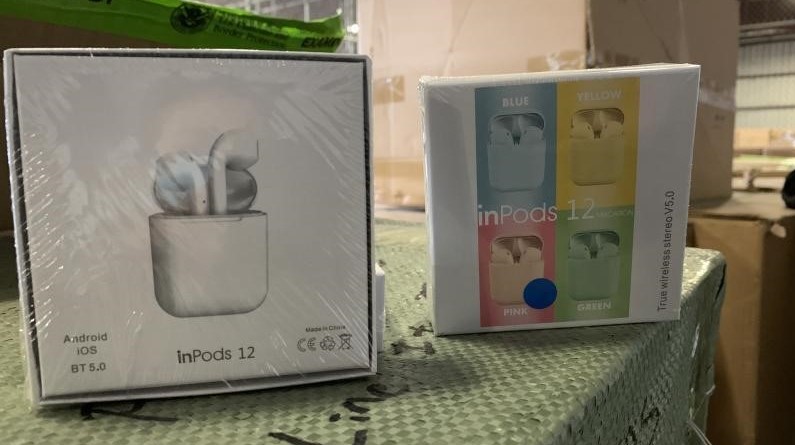 In the nine months to July, US customs officials seized $62.2 million worth of fake AirPods and other counterfeit wireless headphones, according to data obtained by The Information. Around 360,000 units were confiscated during that timeframe. The agency said seizures of counterfeit wireless headphones have increased by 50 percent over the past five years “as products such as Apple AirPods gained popularity.”

US Customs and Border Protection impounded 295,000 sets of counterfeit headphones worth $61.7 million during the government’s previous fiscal year (which starts in October), so it seems there are more phony headphones flooding into the US market than ever. The value of fake headphones that agents seized in 2019 was comparatively minuscule at $3.3 million.

These figures are likely just a drop in the ocean compared with the number of fakes that sneak past borders. It’s nearly impossible to know the exact figures, but estimates made by the US Chamber of Commerce in 2016 suggest officials seize just 2.5 percent of counterfeit goods worldwide.

Given that estimate, The Information suggests counterfeit AirPods could cost Apple billions in lost sales in the US this year alone, assuming that buyers would otherwise scoop up genuine models. Customs agents have seized phony AirPods on at least a dozen occasions across the US in recent years. The products confiscated in four of those seizures would have been worth around $13 million were they genuine Apple products, officials said.

There are, of course, other brands that counterfeiters are copying, and it’s not clear what percentage of fake headphones that customs agents confiscate are AirPods knockoffs. Counterfeit headphones aren’t exactly new, but having hard numbers on seizures highlight just how pervasive they are. Then again, when even customs agents believe a legitimate Apple competitor’s true wireless earbuds are phony AirPods, the extent of the problem might not be too clear after all.

The Galaxy Watch 4 and Galaxy Watch 4 Classic will be Samsung’s first smartwatches in many years to be based on an operating system other than Tizen OS. They’ll run Google’s Wear OS with a fresh version of One UI for smartwatches on top, so unlike previous Galaxy wearables, the upcoming series will reportedly support the Google Assistant.

In fact, according to a recent tweet by @_snoopytech_, the Galaxy Watch 4 series will support both the Google Assistant and Samsung’s Bixby virtual assistant. This bit of detail is supported further by yesterday’s leaked spec sheet, and it’s a pretty big deal.

Up until now, the Galaxy Watch series only offered Bixby out of the box. The Google Assistant was not available through legitimate means, and Amazon’s Alexa is available through an app from the Play Store, though the implementation leaves a lot to be desired.

Even if the Galaxy Watch 4 series will come pre-loaded with Google Assistant and Bixby, as yet, there’s no evidence to confirm whether or not users will have the option to choose a default virtual assistant between the two.

It could be that Bixby will be activated by default without an option to pick Google Assistant as the main virtual helper, or it could be that Samsung will allow Galaxy Watch 4 customers to determine which assistant gets priority over the other.

But given that Samsung was willing to shelve Tizen in favor of a deeper collaboration with Google on Wear OS, it’s very likely that Galaxy Watch 4 / Classic owners will have the option of picking their default assistants. We’ll keep you posted as more details come out. Until then, feel free to let us know if you favor Tizen over Google Assistant or the other way around.