Novak Djokovic says he’s “deeply sorry” and is praying for “everyone’s full recovery” after he and other players contracted COVID-19 at an exhibition tennis tournament he hosted in Serbia.

Djokovic’s tournament took place in Belgrade with fans in attendance, and without social distancing protocols or mask-wearing for players or spectators. Making matters worse, the tournament hosted an after-party at what looks like a nightclub.

Novak Djokovic has COVID-19. 5 other facts about Djokovic are:

– He hosted a tennis tournament with no distancing protocols
– Threw a massive after tourney party
– He’s an anti-vaxxer
– His wife Jelena shared a 5G conspiracy video
– He’s a selfish idiotpic.twitter.com/OqAeHKvNNC

The 19th-ranked player on the ATP Tour, Grigor Dimitrov, along with Borna Coric (33) and Viktor Troicki (184), participated in the tournament and have since announced they have tested positive for the virus. Djokovic, who is the No. 1 ranked player in the world, said he and his wife also tested positive.

The remainder of the tournament, known as the “Adria Tour,” has been cancelled.

“I am so deeply sorry our tournament has caused harm,” Djokovic said in a statement posted to social media. “Everything the organizers and I did the past month, we did with a pure heart and sincere intentions. We believed the tournament met all health protocols and the health of our region seemed in good condition to finally unite people for philanthropic reasons.

“We were wrong and it was too soon. I can’t express enough how sorry I am for this and every case of infection.”

Djokovic says he and his wife will now self-isolate for the next 14 days and get retested in five days. He has advised anyone that attended the tournament or were around attendees to get tested and practice physical distancing.

The 2020 Stanley Cup Final will tentatively end on Oct. 2 at the latest, Sportsnet’s Elliotte Friedman has learned.

The date is one of several tentatively listed in the NHL and NHLPA’s Memorandum of Understanding.

The draft is currently scheduled for Oct. 6. Training camps for 2020-21 are slated to open Nov. 17, with the new season aiming for a Dec. 1 start date.

The NHLPA’s Executive Board approved the CBA extension and 2020 return-to-play plan on Tuesday. The entire NHLPA membership is now in the process of voting on the two agreements with a simple majority required to ratify them.

Public Service Announcement: These predictions will, invariably, be wrong. I’m OK with that. Yours will be, too, so don’t be offended by my honesty. Instead, let’s all take a moment to take a deep breath and reflect on the fact that MLS predictions have always been and will always be a fool’s errand and nothing about the world makes sense right now anyway.

One of the only things that feels logical and predictable in the upside down is that awards still always end up on the mantels of winners. Win games, score goals, go far in the MLS is Back Tournament and you’ll be in the running for individual plaudits. Don’t do many or all of those things, and you’re not going to have any official mementos to remember the tournament by.

In case you need reminding – I am sure you don’t if you are reading this column – the opening match of the MLS is Back Tournament sees Orlando City and Inter Miami play their first-ever Copa del Sol match on Wednesday at 8 pm ET (ESPN, ESPN Deportes in US; TSN, TVAS in Canada).

(Note: As part of Audi’s Goals Drive Progress and their commitment to the growth of soccer and building future MLS stars, at the end of the tournament, Audi will award the MLS is Back Tournament Golden Boot winner an additional $10,000 for his Academy Club.)

Greg Seltzer put together his top five candidates here. I almost went with Raul Ruidiaz myself, but it seems, for the time being at least, that Seattle will play one fewer group stage game than everyone else, which makes the numbers game tougher for the Peruvian.

Thankfully, Greg omitted my clear and obvious favorite, meaning I won’t have to share the glory if I am right/lucky: Sporting KC’s Alan Pulido.

Sporting KC have trained together longer than anyone else, the climate in Kansas City isn’t quite as hot and humid as Orlando but it isn’t far off and Pulido has proven, both in Liga MX and two games in MLS, that he’s particularly suited to two things: finishing by any means necessary in the 18-yard box and burying penalty kicks.

I expect Sporting KC to make a deep run in this tournament, and I expect there to be some blowouts thanks to the variation in preparations between the squads, the conditions and decision making that’s in preseason form. Sporting’s chance creation was not the issue in 2019, and the Mexican will get plenty of opportunities to pad his total from the run of play. Tired legs, four months of rust and Video Review ought to give him some from the spot, too.

Here’s one I haven’t heard anyone else say: the Union’s Kacper Przybylko. That’s my ultimate Hipster Golden Boot pick.

Player of the Tournament presented by adidas

I already wrote this. You can read it!

If you put me on the spot and said pick ONE player … I’d go with … Alejandro Pozuelo.

Here’s what I wrote about him a week ago. None of it has changed:

Toronto are a tournament team. They’ve proven that, over and over. They did it last year without Jozy Altidore. They did that collectively and because they have Pozuelo, who can impact the game from just about any attacking position.

Whether it’s from a free kick, in transition, finding the right gap and timing to break down a packed in shape or scoring the goal himself, with either foot, the Reds’ No. 10 is a complete attacking player in a complete and tactically flexible team. If Altidore is better than 70 percent – he’s still in individual training after returning from Florida – fit and in any way sharp watch out.

Two names, on either side of the bracket: Stefan Frei and Sean Johnson. Both are likely to make deep runs with Seattle and New York City, which we already know are a prerequisite to winning any individual award. I think these two ought to have been the previous two Allstate MLS Goalkeeper of the Year award winners. They didn’t get the votes. Call this a consolation prediction if you want.

If you pushed me, I’d go with Johnson. Mostly because I think the Eastern Conference is slightly weaker, and therefore his path to the final and glory is a tad more likely.

Young Player of the Tournament presented by AT&T

Again, I’ll split my predictions because this is more of a thought exercise than an official ballot. This time the split is American/Canadian vs. international.

For the former, I’m going with Brenden Aaronson, who is, incredibly, still just 19 years old and has three goals in his past eight MLS regular-season games. That’s a good trend. Aaronson knows the next step in his development is a consistent final product, and unlike many teenage American talents, he’ll get the minutes to put up numbers with the Union. As my Kacper Przybylko shout shows, I am high on the Union. I’ve got them winning Group A in my Bracket Challenge.

Aaronson does a little bit of everything, which I think will help him stand out, but it’s the goals and assists that I expect will get him enough attention to be in the running for the Young Player of the Tournament award. With Jamiro Monteiro, Alejandro Bedoya and a dedicated defensive midfielder behind him, Przybylko and Sergio Santos in front of him and Raymon Gaddis and Kai Wagner running the flanks, Aaronson will get chances to deliver on his potential as a budding American No. 10. I hope and expect him to deliver.

That said, my prediction is Ezequiel Barco. Adam Jahn is not Josef Martinez. He never will be, and this is the last time I’ll mention it. But Jahn can occupy central defenders, has soft feet for a big man that allows him to hold and distribute and he makes hard runs at the near post. If he does those things, Barco and Pity Martinez are going to be able to roam and find space, and they’ll be extremely difficult for defenders to track, especially in counterattacking situations.

Barco is 21 years old now. The potential phase of his career is over, and he delivered at the level expected in the season’s first two games (2 G, 1 A). I picked him to win 22 Under 22 last December. I’m not backing off that now. Time to deliver. His career needs it. Atlanta United need it.

MLS is Back Tournament Best XI

This is not a traditional Best XI. It’s a “Players I want to have a good tournament for a variety of reasons” XI. I readily admit that. Enjoy the soccer! 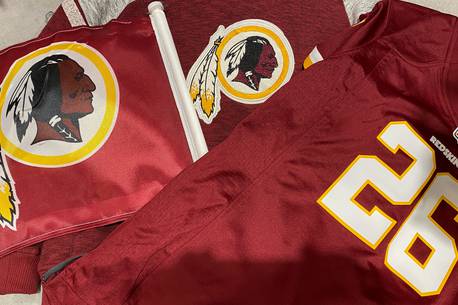 (Reuters) – Amazon.com Inc <AMZN.O> is pulling Washington Redskins merchandise from its website, with sellers given 48 hours to review and remove any products flagged by the e-commerce giant, according to a note sent to sellers by the company.

An Amazon spokeswoman confirmed the move by the company.

Under mounting pressure from sponsors and Native American rights groups, Washington Redskins owner Dan Snyder said last week he would consider changing the name of the National Football League team whose roots date back to the 1930s.

Controversy over the team’s name, which is widely seen as a racial slur against Native Americans, resurfaced in recent weeks amid widespread racial and social justice protests across the United States after the death of George Floyd in police custody.

Amazon’s action follows that of other retailers such as Walmart Inc <WMT.N>, Target Corp <TGT.N> and Nike Inc <NKE.N>.

Top sponsors, including PepsiCo Inc <PEP.O> and FedEx Corp <FDX.N>, who have the naming rights to the NFL team’s Landover, Maryland, stadium, called for a change last week.