Ontario is reporting 847 cases of COVID-19 and 10 deaths on Wednesday.

The province reports nearly 34,000 completed tests compared to over 27,000 a day ago. These numbers are down from the 48,701 tests reported on Sunday. Testing is typically down in days following a weekend.

The test positivity rate is down to 3 per cent from 3.6 per cent a day ago. The rate dropped to a near four-month low of 2.3 per cent on Friday last week.

As cases trend down in the right direction, instances of the more transmissible strains have been identified in 15 public health units.

The province is also confirming a single case of the P.1 variant first detected in Brazil.

According to the latest provincial modelling data released last week, the UK variant (B.1.1.7) likely accounts for 10 per cent of current cases, the data suggests the variant will soon become the dominant strain of the virus.

“There’s some evidence that it may also be more lethal,” said Dr. Adalsteinn Brown, Co-Chair of the Ontario COVID-19 Science Advisory Table. “If the B.1.1.7 variant behaves as it did in the United Kingdom, cases will start to grow here again in late February or early March; that is unless we can limit the spread through public health measures.”

The stay-at-home order was lifted in most Ontario health units this week as the province slowly eases pandemic restrictions and moves forward with its gradual reopening plan.

Toronto, Peel Region, York Region, and North Bay Parry Sound is set to remain under the stay-at-home order until at least Feb. 22 but the order lifted for 27 Ontario public health units as of Tuesday.

“Anything beyond schools at this point in time, I really think we need to take a very close look at,” said Loh.

In-person classes have now resumed across the entire province.

School boards in Toronto, Peel Region, and York Region welcomed back students this week after a stretch of online learning that began in January as part of a provincial lockdown. 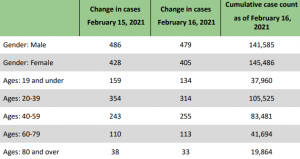 There are 1,456 more resolved cases as active cases fall to the lowest point since Nov. 11.

Among the active cases, 719 people are currently in the hospital. That number is down over 200 patients in the last week.

Among the hospitalized, 298 are in the ICU. Last week, the number of ICU patients dipped below 300 for the first time in the new year.

The latest on the coronavirus outbreak for Feb. 17 – CBC.ca

B.C. vaccinates more than 200,000 people for COVID-19, as second dose shots fall to a trickle – Vancouver Is Awesome

B.C. announced March 3 that it has vaccinated more than 200,000 individuals with at least one dose of a COVID-19 vaccine – 11 weeks after the first dose was administered in the province on December 16.

B.C. officials said earlier this week that they expect all eligible British Columbians to have been vaccinated by the end of July. In order to do that, the province will need to increase more than tenfold the number of people that health officials vaccinate each day, to around 26,666.

Health officials administered 6,627 doses of vaccine in the past day, to 6,543 new people, and a mere 84 second doses to individuals who have already had their first doses.

Provincial health officer Bonnie Henry and others have explained that the new strategy is to focus first on vaccinating people with single doses, and to leave second doses until as long as 112 days after the first dose because of supply shortages. The rationale for this tactic is also that first doses provide significant immunity and it is smarter to vaccinate as many people as possible with first doses, to limit the spread of COVID-19, than to focus on having people fully immunized with two doses.

The spread of COVID-19 in B.C. is not abating. Officials detected another 542 new infections overnight, for a total of 81,909 cases since the first infection was detected in late January 2020. The vast majority of the 4,654 people actively infected with the virus in B.C. have been told to self-isolate, but 246 people are sick enough to be in hospitals, with 64 of those in intensive care units.

Another seven people died overnight while being infected with the virus, raising B.C.’s death toll from COVID-19 to 1,372.

More than 92.5%, or 75,819 people, who were infected with the virus, have tested negative twice and are therefore considered by the province to have recovered. Health officials are also closely monitoring 8,617 people for symptoms because they have had known exposure to identified cases.

“There have been 18 new confirmed COVID-19 cases that are variants of concern in our province, for a total of 200 cases,” provincial health officer Bonnie Henry and Health Minister Adrian Dix said in a joint statement. “Of the total [variant] cases, 11 are active and the remaining people have recovered. This includes 176 cases of the B.1.1.7 (U.K.) variant and 24 cases of the B.1.351 (South Africa) variant.”

There were no new outbreaks of the virus at seniors’ homes, nor were there any active outbreaks in those homes that were declared over.

None of the nine active outbreaks at seniors’ homes is in the Vancouver Coastal Health region.

The outbreak at Glacier View Lodge in Courtenay is the only outbreak at a seniors’ home in the Island Health region.

The only outbreak at such a facility in the Northern Health region is at the Acropolis Manor in Prince Rupert.

The two active outbreaks at seniors’ living facilities in Interior Health are now at Brocklehurst Gemstone Care Centre in Kamloops, and The Florentine in Merritt.

While thousands of Ontario seniors 80 years of age and older were recently inoculated against COVID-19, many have not yet received their first vaccine dose.

Peel and York Regions launched their own online portals two weeks ahead of the provincial government’s website.

Online booking for appointments in York opened at 8 a.m. on Monday. Within an hour and a half, all 20,000 available spots had been claimed.

The region announced late Wednesday evening it would be opening an additional 2,000 appointments.

In Peel, public health is working in collaboration with Trillium Health Partners and William Osler Health System to provide the shots for eligible residents.

Meanwhile, in Canada’s largest city, officials continue to wait for a badly needed boost to its vaccine rollout.

Pegg, who is the general manager of Toronto’s Office of Emergency Management, faced several questions about when residents in that age group would be able to receive vaccinations at city-run sites.

When asked on Monday during a news conference about why Toronto was unable to launch its own targeted vaccination effort, Dr. Eileen de Villa pointed to the considerable number of people required to be inoculated under the provincial prioritization framework.

“We have roughly, I believe, about 100,000 people working within the health-care system here, and that just doesn’t exist in other jurisdictions,” she said.

“That’s just one example of the scale or the size and scope of the vaccination campaign that we need to undertake here in Toronto that differentiates us from other jurisdictions.”

2:23
Coronavirus: Toronto and Peel Region request a return to the grey zone

Coronavirus: Toronto and Peel Region request a return to the grey zone

Global News reached out to the Ministry of Health for comment on Wednesday afternoon, and did not receive a response in time for publication.

Toronto Public Health says this was enough to cover 97,685 people as part of the two-dose regimen. The estimated number of people to be vaccinated in phase one is 325,000.

Public Health officials in Peel Region tell Global News as of the end of last month, 65,000 doses have been received across sites that obtain doses directly from province.

Nearly 52,000 doses have been administered to those eligible to receive one.

As vaccine supply starts to ramp up in Ontario, residents could soon get their COVID-19 vaccine in pharmacies.

The Ford government and the Ontario Pharmacists Association have reached a deal that will allow the administration of vaccines in 4,600 pharmacy locations across the province.

“We have signed agreements now with the pharmacy association to allow them to vaccinate. As you know, the minister of health has expanded the number of health care practitioners who can provide vaccines,” Solicitor General Sylvia Jones said Wednesday.

“So, we’re ready. We have put in the bricks if you may to make sure that no matter how much vaccine we have, we’re ready and able to ramp up quickly.”

Justin Bates, the president of the association, told CTV News Toronto Wednesday that a pilot project will be launched in a number of pharmacies next week in three health units – Toronto Public Health, Kingston, Frontenac, Lennos and Addington Public Health, and Windsor-Essex County Health Unit.

“I think that’s a great milestone to increase access and convenience for residents of Ontario,” Bates said.

“We’re going to start there with the limited amount of vaccine that’s available and then scale up.”

Bates added that details of the pilot project are still being finalized, including who is eligible to go to a pharmacy and what vaccine will be distributed.

The province could see 46 vaccinations in a day per pharmacy, which amounts to about one million per week, he said.

“We have the resources and infrastructure to be able to add quite a few vaccinations and give ultimately, a choice and a complementary system to both public health mass immunization clinics, as well as what the role for primary care physicians are going to going to ultimately be,” Bates said.

“This is going to be an all-hands-on-deck scenario. And pharmacies are certainly an important part of that.”

When asked if pharmacists will be involved in the rollout of therecently approved Oxford/AstraZeneca vaccine, Bates said that it is under consideration, but no final decision has been made.

The provincial government indicated that it will be using ‘a different pathway’ in delivering the AstraZeneca vaccine into people’s arms. Ontario is expected to receive approximately 190,000 doses of the vaccine this month, including 114,000 shots with an expiration date of April 2.

The province said those between the ages of 60 and 64 will have access to the AstraZeneca vaccine.

“I think because of the supply challenges, and also because we don’t want to take away from what’s available in the public health clinics, whether it’s the mass immunization clinics or the mobile pop-up clinics, I think they’re going to look for a separate supply for pharmacy, whether that’s AstraZeneca or what have you,” Bates said.

“But we want to make sure what we’re doing is complimentary. That we’re offering choice for patients, residents in the province lots of access points. We don’t want to take away from the efforts that are underway for the priority populations within the other parts of the system.”

B.C. vaccinates more than 200,000 people for COVID-19, as second dose shots fall to a trickle – Vancouver Is Awesome