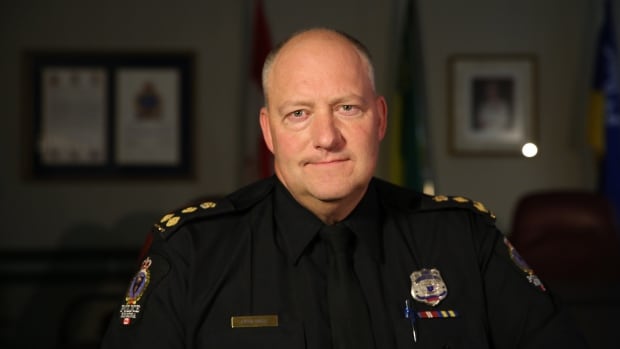 In light of a recent robbery during the sale of an item arranged over social media, Regina’s top cop is reminding people to use caution when organizing meet-ups with strangers.

Earlier this week police were called to a residence on the 1200 block of Retallack Street, where a man was robbed at gunpoint and sprayed with bear mace. The location was agreed upon over social media beforehand to conduct the sale of an item.

An 18-year-old woman was charged in connection to the incident, while police said they were still searching for the man believed to be responsible for holding the victim at gunpoint.

“We often do customer service messaging to remind people they have to be careful,” Bray said.

“Don’t arrange for a meeting to do some sort of a transaction in a situation that you wouldn’t be comfortable to do.”

Bray said he was not part of any discussions with officers to establish such an area in Regina yet.

“We don’t want to have the VarageSale signs set up on the front lawn of the police service,” Bray said.

“I know that’s not what you’re suggesting, maybe there is some work to be done there.”

VarageSale’s site lists several safety precautions buyers and sellers should take before and during a meetup.

Among the recommendations, the site recommends prospective buyers get to know who they’re meeting by examining their profile, which is connected to Facebook for verification.

Buyers and sellers are encouraged to meet in public locations. The website’s locally-based admins ensure users who join communities actually live in or are willing to travel to that city.

Where possible, users are asked to use safe zones established by police.

“Safe zones are a great option if you’re doing a high-value transfer, are meeting someone at night, have young kids with you, or if you just want to feel extra secure,” the site said.

When meeting in public isn’t possible, people are asked to consider bringing along a friend or meeting outside homes or apartment buildings rather than setting foot inside.

Meanwhile, Facebook Marketplace recommends buyers and sellers plan accordingly to stay safe by telling a friend or family member the meeting location ahead of time.

People are also encouraged by Facebook to bring a charged cell phone along for any meet-ups.

Trans creators writing their own media narratives – The Charlatan

The Worst Social Media App For Sleep Is TikTok – Refinery29

Even within the activities she says are acceptable to do before bed, there’s a spectrum. Schneeberg says you can imagine rating activities on a scale of one to 10, with one being super boring and 10 being super engaging. “You don’t want to be watching or reading a 10. That might be a thriller, for example, or a book your favourite author just published, or a brand-new, binge-able show,” she says. “Try to choose something that’s a five: not so boring that you don’t care, but just interesting enough that drowsiness can sneak up on you and you aren’t lying there worrying about whether you’ll be able to fall asleep. You want distraction — but only at a certain level.”

Democrats have been outspoken in their concerns that Pack, a conservative filmmaker and associate of former Trump adviser Steve Bannon, has been brought on board to turn VOA and the other outlets into a pro-Trump propaganda machine with little regard for the independence granted them by their founding charter. Wednesday’s letter was notable in that it was signed by the two powerful Trump allies who are particularly close to the president.

In a scathing letter to Pack, the senators complained he had given lawmakers no reason for the purge of qualified leaders at RFE/RL, RFA, MBN and the Open Technology Fund, a non-broadcast arm of the agency that works to provide secure internet access to people around the world. The director and deputy director of VOA resigned just days before the firings, which also included the dismissal of each of their governing boards.

“The termination of qualified expert staff and network heads for no specific reason as well as the removal of their boards raised questions about the preservation of these entities and their ability to implement their statutory missions now and in the future,” they wrote. “These actions, which came without any consultation with Congress, let alone notification, raise serious questions about the future of USAGM under your leadership.”

Pack was bitterly opposed by Democrats but was confirmed to his position last month on a party line 53-38 vote in the Senate. Rubio, Graham and the other two Republicans who signed the letter, Jerry Moran of Kansas and Susan Collins of Maine, all voted for his confirmation. Democrats Dick Durbin of Illinois, Patrick Leahy of Vermont and Chris Van Hollen of Maryland, who opposed Pack’s confirmation, also signed.

Pack has defended the moves as necessary to reform the agency, but Democrats and an increasing number of Republicans have taken issue with actions they fear could subvert its non-partisan mission. Conservatives have in particular assailed the firings of former Rubio staffer Jamie Fly as head of RFE/RL and former U.S. diplomat Alberto Fernandez as head of MBN.

A request for comment about the letter was not immediately acknowledged by Pack’s office. But, in a statement issued after the initial criticism of the firings, he said: “Every action I carried out was — and every action I will carry out will be — geared toward rebuilding the USAGM’s reputation, boosting morale, and improving content.”

Regardless of any needed reforms. the senators said it is critical for AGM’s outlets to hold true to their charter of independence and provide global audiences with unbiased and credible news and other programming. This, they said, is particularly important as the U.S. confronts increasing misinformation and disinformation campaigns from Russia, China and Iran.

“We urge you to respect the unique independence that enable USAGM’s outlets and grantees to help cultivate a free and open world,” the wrote. “Given the bipartisan and bicameral concern with recent events, we intend to do a thorough review of USAGM’s funding to ensure that United States international broadcasting is not politicized and that the agency is able to fully and effectively carry out its core mission.”

Turkey’s president has vowed to tighten government control over social media following alleged insults directed at his daughter and son-in-law when they announced the birth of their fourth child on Twitter.

“Do you understand why we are against social media such as YouTube, Twitter and Netflix? To eradicate such immorality,” Erdogan told members of his Justice and Development Party (AKP).

He said his government is determined to introduce legislation that would force social media companies to establish a legal presence in Turkey.

The requirement would mean they could be held financially accountable and forced to respond to Turkish court decisions.

Finance Minister Berat Albayrak, who is married to Erdogan’s daughter Esra, on Tuesday announced the birth of their fourth child, Hamza Salih, on Twitter.

The announcement was followed by insulting messages questioning the paternity.

Erdogan said investigations were under way against those who “attacked” his family by “abusing a newborn”.

“We will keep chasing these cowards who attack a family and the values they believe represented by them through a baby,” Erdogan said.

The Turkish leader blamed global social media companies with headquarters in Western nations for “turning a blind eye” to violations in Turkey.

“We experienced similar attacks in the past. The lack of monitoring on these platforms have a role in the rise of this sort of immoral behaviour,” he said.

Many Turks rallied in support of the president’s family and condemned the insults, including opposition politicians.

Ankara regularly clamps down on dissent, most recently on posts about its handling of the coronavirus pandemic.

It is accused of targeting opposition politicians, journalists, academics and lawyers for expressing their opinions online.

Erdogan last week faced a flood of “dislikes” on YouTube while addressing youth before their exams. When the live chat was quickly closed to comments, “No Votes” started trending on Twitter.

Turkish authorities have previously imposed temporary blocks on Twitter and other social media during crises, for example, following an air attack in Syria’s Idlib that killed dozens of Turkish soldiers in February this year.

Although Erdogan’s comments came days after the reported insults on social media, his government has long been considering amendments that would enable it to keep social media giants such as Twitter, Facebook and YouTube in check by forcing them to remove content or risk facing heavy fines and restricted access to their platforms.

Critics fear the move is aimed at further limiting the Turkish public’s ability to access independent news outlets in an environment dominated by pro-government media.

Turkey has blocked access to thousands of websites. In January, the government lifted a more than two-year ban on Wikipedia after Turkey’s top court ruled the block was unconstitutional.

Turkey had halted access to the online encyclopedia after it refused to remove content the government deemed to be offensive.

In December 2015, Turkey’s communications regulator issued an unprecedented fine on Twitter for allowing the publication of content deemed to justify terror.

Erdogan’s aversion to social media platforms dates back to huge anti-government protests in 2013, which were often mobilised by Twitter and Facebook posts.