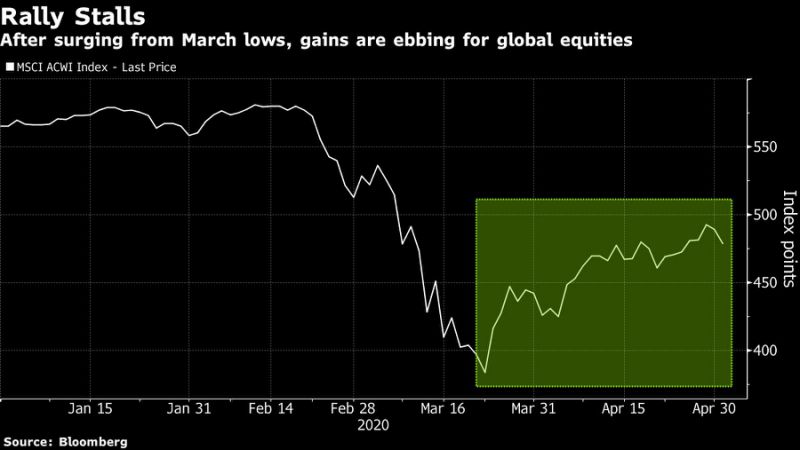 (Bloomberg) — U.S. equity futures declined and stocks opened lower in the Asia, indicating the risk-off move that’s hit markets at the start of this month may have further to run. The dollar climbed.

S&P 500 futures retreated more than 1.5% after global stocks posted a more than 2% slide on Friday, while shares in Sydney and Seoul opened lower. China’s yuan extended Friday’s slide amid concern tensions with the U.S. are increasing. The Australian dollar slipped along with the pound and euro, while Australian bonds nudged higher. Trading volumes may be light due to holidays in China and Japan, and Treasuries won’t trade until the London open. Treasury futures climbed and oil began the week on the back foot.

The more than 10% rally in world shares in April is being tested as investors assess efforts from countries starting to ease lockdown restrictions against fears of a second wave of infections and a steady steam of bad economic data. Westpac Banking Corp. in Australia on Monday said profit tumbled and became the latest bank to delay a dividend payment. Earnings roll on this week, with firms including Disney, BMW, and Air France-KLM.

“While it is unlikely that we will retest the March lows, at least there is some chance that we head back toward the bottom of the April trading range -– which would be a further 7-10% downside from here, for most risk assets,” said Ciaran Mulhall, managing director at Solus Capital Partners Ltd.

Also weighing on sentiment is fresh political sparring between the U.S. and China. Secretary of State Michael Pompeo said “enormous evidence” shows the novel coronavirus outbreak began in a laboratory in Wuhan, China, but didn’t provide any proof for his claims. That comes after President Donald Trump and his aides last weeks sharpened their criticism of Beijing, demanding answers about the virus’s origin and hinting at possible retaliation.

On the virus front, Gilead Sciences Inc. plans to get its drug remdesivir to patients within days after getting U.S. backing for emergency use. New York added the fewest new deaths in more than a month, while fatalities slowed in the U.K. and Italy.

“My concern is that the market has priced in all that optimism before we have confronted the worst of the bad news on the economy and on some industries and earnings,” Michael Jones, chief executive officer at Caravel Concepts LLC, said on Bloomberg TV. “There are some challenges and setbacks that are going to be hitting us in the face over the next four weeks and we are no longer priced cheaply enough to just look past all that bad news.”

Meantime, North Korean troops fired at their South Korean counterparts in the demilitarized zone that divides the two countries for the first time in years. The move came a day after Kim Jong Un resurfaced at a fertilizer factory, ending weeks of speculation about his whereabouts.

An OPEC sign hangs outside the OPEC Secretariat in Vienna, Austria, on Nov. 29, 2017.

OPEC and its oil-producing allies reportedly agreed to extend the historic 9.7 million barrels per day production cut that was set to expire at the end of June, according to two sources familiar with the matter.

The cut will be extended through the end of July, and the group is expected to confirm the agreement at its meeting on Saturday, which kicked off a little before 8:30 a.m. ET.

The closely watched meeting was initially scheduled for June 9-10, but was pulled forward after Iraq agreed to comply with its quota.

On Friday West Texas Intermediate jumped 5.72% to settle at $39.55, while international benchmark Brent crude gained 5.78% to settle at $42.30. It was each contract’s sixth straight week of gains, and the highest settle since March 6.

“OPEC+ looks set to formally announce a one-month deal extension at [Saturday’s] ministerial meeting,” said Helima Croft, RBC’s global head of commodities strategy. “Nevertheless, there could be some last minute theatrics at the virtual gathering and we suspect that some individual producer performance will still be less than perfect on a go-forward basis.”

The cut — the largest in history — came as oil demand fell off a cliff due to the coronavirus pandemic. The International Energy Agency estimates that about one quarter of demand was sapped in April as billions of people around the world stayed home in an effort to slow the spread of Covid-19. The hit to demand came as producers continued to pump oil, which sent WTI tumbling into negative territory for the first time on record, while Brent fell to a 20-year low.

Since then, prices have steadily climbed higher as economies begin to reopen and as producers further rein in output. In the U.S., production has fallen from a record 13.1 million bpd in March to 11.2 million bpd, according to the U.S. Energy Information Administration. WTI is still about 40% below its January high of $65.65, however.

“Although small in scale, this cut is however important in squaring the group’s strategy, which has this year alone swung from price focused cuts, to market-share recapture, to internal price war to finally a record large cut,” Goldman Sachs’ Damien Courvalin wrote in a note to clients Friday.

CALGARY —
Alberta gained 28,000 jobs in the month of May, according to the latest Labour Force Survey released Friday morning from Statistics Canada.

The increase in employment follows a cumulative decline of 361,000 jobs from February to April.

Alberta’s job increases were entirely driven by the services-producing sector after the province allowed some businesses such as restaurants and non-essential shops to reopen as of May 14.

The unemployment rate in the province increased by 2.1 percentage points to 15.5 per cent, which is now the second highest in the country behind Newfoundland and Labrador at 16.3 per cent.

Nationwide, the average rate of unemployment is now 13.7 per cent, topping the previous high of 13.1 per cent set back in December 1982.

Canada added a total of 290,000 jobs across the country. According to Statistics Canada data, the total number of hours worked is increasing at a faster pace than employment.

Total hours worked across all industries grew by 6.3 per cent in May, compared with an increase of 1.8 per cent (290,000 jobs) in employment.

In response to one of the most dramatic economic downturns in Alberta’s history, the provincial government will start rolling out an economic recovery plan later this month focused on cultivating key industries.

Premier Jason Kenney said last week that Alberta’s strategy will take a “pedal to the metal” approach to diversification after a steep decline in the price of oil.

On Monday, Finance Minister Travis Toews announced that his financial blueprint will be centred on growing sectors such as energy, agriculture, technology and petrochemical manufacturing.

A recent study from the Conference Board of Canada projects Alberta will see its economy shrink by 6.8 per cent this year.

Toews called that report realistic and noted the downturn will be measured in months not weeks.

In light of the ongoing COVID-19 pandemic, the government announced that it has postponed the 3500MHz spectrum auction by six months.

The new date for the auction is now June 15th, 2021. Several of the other key dates associated with the auction are listed on the government’s site since they’ve also been pushed back by six months.

“Canada’s telecommunications service providers are doing their part in this difficult time, providing essential services to keep Canadians connected as we face the realities of the COVID-19 pandemic together. A number of providers have raised concerns, and the Government is implementing measures to address them,” said Navdeep Bains, Minister of Innovation, Science and Industry.

“The Government will continue to reach out to telecommunications service providers—and to the private sector more broadly—to understand their challenges and support them to ensure that Canadians have access to high-quality networks and broad coverage at low prices.”

The government’s press release from June 5th, 2020 states that this is in line with what other countries are doing. It will help the telecommunication companies focus on providing robust service to Canadians as many of us are still self-isolating at home.

Beyond this, a consultation on the 3800MHz spectrum is set to begin in August to get the ball rolling on that slice of 5G spectrum as well. Notably, both the 3500MHz and 3800MHz are considered key due to their ability to transport data at 5G speeds at a reasonable range.

In a statement to MobileSyrup, Chethan Lakshman, the vice president of external affairs at Shaw, stated, “given the pandemic’s impact on Canadian society and overall business operations, we support the decision to provide additional time for industry and the government to prepare for this auction. A well-run auction process will ensure that Canadians and the Canadian economy will benefit from strong competition in wireless and 5G for years to come.”

“Our networks are the backbone of so much of our economy and as we continue to rollout Canada’s first 5G network, driving innovation and productivity, we look forward to accessing 3500 Mhz spectrum as soon as it is available,” Rogers said in a statement to MobileSyrup.

“While we would like to see the auction proceed as soon as possible, we appreciate the government’s recognition of facilities-based carriers for keeping Canadians connected at all times, even during the pandemic. Because of our continued investment in building out communications infrastructure, TELUS’ 4G LTE network speeds are among the fastest in the world; faster even than South Korea’s 5G network speeds, according to Opensignal. We have long been ready to make the crucial investment in 3500 MHz spectrum and network infrastructure required to realize the full promise of 5G so that Canadian entrepreneurs, businesses, and innovators can leverage the next generation of connectivity that promises to benefit us all. In the interim, we will continue to provide our customers with access to the fastest and most reliable networks possible and focus our efforts on supporting Canada’s recovery from COVID-19 in whatever ways we can.”