U.S. citizens should consider leaving Russia immediately on commercial flights, the State Department said on Sunday, citing an increasing number of airlines canceling flights and countries closing their airspace to Russia after its invasion of Ukraine.

It has asked U.S. citizens to have “a contingency plan that does not rely on U.S. government assistance.”

Russia’s invasion of Ukraine, the biggest assault on a European state since World War Two, has unleashed a barrage of Western reprisals, with U.S. and European governments imposing sanctions on Russian banks and financial institutions.

Russian President Vladimir Putin has called the attack a “special operation” through which he aims to demilitarise Moscow’s southern neighbor.

The State Department has kept its travel advisory for Russia at “Level 4: Do Not Travel”. On Feb. 20, the U.S. embassy in Moscow had advised Americans in the country to have an evacuation plan, citing the threat of attacks in Moscow and along the Russian border with Ukraine.

(Reporting by Doina Chiacu and Humeyra Pamuk; Editing by Will Dunham) 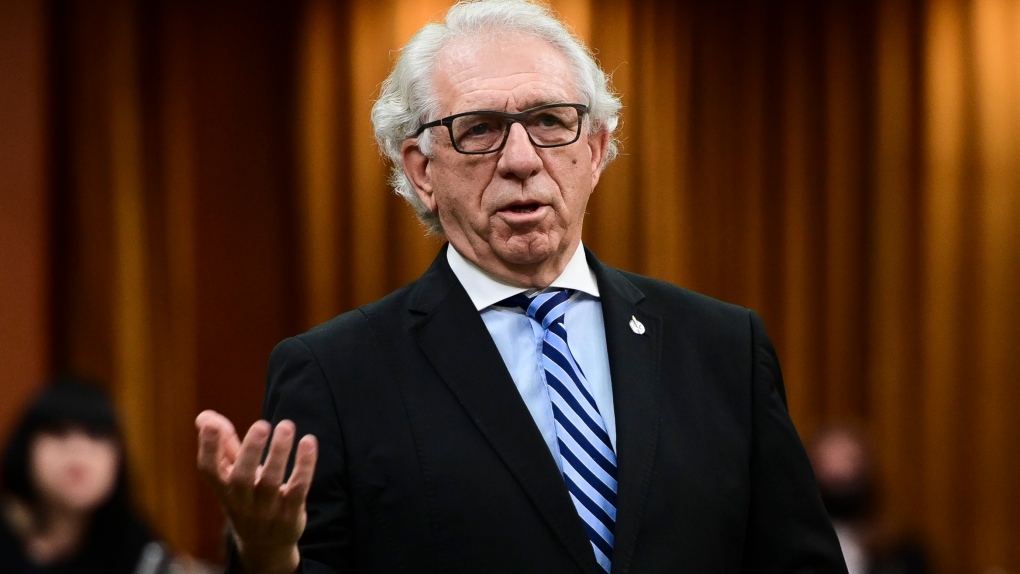 Canadian members of Parliament are urging the government to pay more attention to recent U.S. news about “unidentified aerial phenomena,” or UAP: a term used for what are more commonly known as unidentified flying objects and UFOs.

“When you see the information that’s come out of the United States, you’d have to take it seriously,” Maguire told CTV News from his Ottawa office. “We need to have a parallel program to what the United States already has.”

On Tuesday, a pair of senior U.S. military officials testified during the first public congressional hearing on UFOs in more than 50 years.

“We know that our service members have encountered unidentified aerial phenomena,” Ronald Moultrie, who oversees the Pentagon’s current UFO research office, said during the hearing. “We’re open to any conclusions that we may encounter.”

Earlier this month, CTVNews.ca revealed former Canadian defence minister Harjit Sajjan also received a UFO briefing ahead of the June 2021 release of an unclassified U.S. intelligence report on recent military sightings, which have included UAP that appeared to “maneuver abruptly, or move at considerable speed, without discernable means of propulsion.” Military personnel, police and pilots have also filed reports in Canada.

“We need to identify the origins and the intent of these UAPs, and that certainly can’t hurt anything,” Maguire said Tuesday.

Maguire’s office states it arranged a Feb. 16, 2021 briefing for the Manitoba MP and another Conservative parliamentarian with Luis Elizondo, a former U.S. Army counterintelligence officer who reportedly ran a UAP research program before resigning from the Pentagon in 2017.

“Mr. Maguire is absolutely correct in his concern, because he knows that these reports do occur,” Elizondo told CTV News from Wyoming on Tuesday. “I think the time has come for us to have an open and honest dialogue about this topic without fear of retribution, without stigma and associated taboo.”

Maguire has penned a recent op-ed on the subject and has even used his committee work to raise questions about UAP sightings in Canada. Earlier this year, Maguire’s office arranged another briefing with members of the Scientific Coalition for UAP Studies (SCU), an international think tank dedicated to applying scientific methods to UAP research.

Engineer and founding SCU board member Robert Powell was part of that Jan. 28 meeting and says he also participated in an Oct. 20, 2021 briefing for a Liberal member of Parliament.

“Both MPs were very interested in the subject,” Powell told CTVNews.ca from Austin, Texas. “The main thing I try to get across in these types of meetings is basically to give them as good an understanding as I can of the history and the current status of the UAP subject.”

“We have no idea where they’re coming from or what their capabilities are, or what their intent is,” Mellon told CTV News in a June 2021 interview. Mellon did not respond to a request to comment on this story.

Internal briefing documents obtained by CTVNews.ca state the Canadian Armed Forces “does not typically investigate sightings of unexplained phenomena outside the context of investigating potential threats or distress.”

Meanwhile in the U.S., Pentagon UFO programs have operated under various acronyms for years. Questions about the national security implications of sightings have even sparked rare cooperation between Democrats and Republicans, which was evident during Tuesday’s congressional hearing and with a late 2021 Senate initiative to establish a new UAP research office.

“One of the interesting and noteworthy points about the study of UAPs is that everything I have seen both in Canada and the United States is that there is no partisanship on this question,” Powell said. “All parties seem to be interested in this subject, and it’s not a political issue.”

“If there’s any issue that we can be nonpartisan on in Canada, it should be this one,” Maguire added.

“If the testimony coming out of the States provides the public with a glimpse into the seriousness in which they’re taking it, then I think it would be well-advised for us to follow in the same pursuit,” Green told CTVNews.ca on Tuesday from Ottawa. “If they’re having public hearings of this nature, I can only begin to imagine what they already privately know.”

US’ easing of travel and remittances to Cuba met with contention

The country’s recent announcement of a series of steps to loosen some Trump-era restrictions on travelling to Cuba and the transfer of family remittances between the two countries has been met with some contention.

Yesterday the government said it will aim to issue 20 000 visas under a family reunification programme for Cubans to join their relatives in the US and will also permit more commercial flights to destinations beyond Havana for group educational trips and lift a US$1 000 limit on quarterly remittances.

However, Cuba’s Foreign Minister, Bruno Rodriguez, said the decision doesn’t change the embargoes which have been in place since 1962 nor most of Trump’s measures against the country.

“It’s a limited step in the right direction. To know the real scope of this announcement, we must wait for the publication of the regulation that will determine its application,” said Rodriguez.

At the same time, US Senator, Robert Menendez, chairperson of the Senate Foreign Relations Committee and a member of President Joe Biden‘s Democratic Party denounced the announcement.

“To be clear, those who still believe that increasing travel will breed democracy in Cuba are simply in a state of denial. Today’s announcement risks sending the wrong message to the wrong people at the wrong time and for all the wrong reasons. For decades, the world has been travelling to Cuba and nothing has changed,” said Menendez.

The COVID-19 pandemic and the war in Ukraine have hurt the Cuban economy, with fuel scarcity causing blackouts and limiting public transport.

According to statistics from the US Customs and Border Protection, the economic crisis has driven more Cubans to try to migrate to the US. Since October, almost 80 000 Cubans have crossed the US-Mexico border, more than double the number in 2021.

Our world has been experiencing untold horrors these past three years. Millions of our neighbors have become ill due to The Pandemic, some millions dying, while others suffering from the long-lasting tentacles that are Covid long haulers. Many of our neighbours have lost their businesses, their livelihoods and retirement funds because of this pandemic. Now Europe faces an international challenge it has not seen for many decades, the challenge of warfare being carried out within their continental backyard. Russia vs Ukraine, Aggressor attacking a peaceful neighbour. And you thought social insanity was a forgotten cliche.

A return to international intrigue and competition among the superpowers, and a rise of the greatest of the past ghost, Nationalism. Every time I hear someone shouting support for The Ukraine or Russia, the hairs on the back of my neck stiffen. Alarm alert, my neighbours are falling for the oldest trick in the book of fools. Yes, there is such a book. In it are found words with “ism” following every word. False political gods promising something better, if only the listener will follow blindly, trustingly. Nationalism is my favourite. This force has built nations, helped small people become mightier, and also destroyed nations, lives and hopes in the past, and presently too. Many Russians believe in their leader Putin, hoping for a return to Russian greatness. Ukrainians, once part of this Russian Federation that oppressed millions now are experiencing what it is like to be Hungarian, Polish, or Czechoslovakian, under the jackboots of oppression. The world looks upon the Ukrainians as heroes standing against the horrible Russian Bear. I think Karma sucks, doesn’t it Ukraine? Ukraine’s history is full of horror and terrible deeds carried out in the name of nationalism. Karma sucks.

The ghost of war will subside soon. Russia has accomplished what it wished to indeed. Wound Ukraine, making it reliant upon Russia in the near future and gaining territory in the East and South, annexing Ukraine’s marine territory. The West will stop supporting their present-day favourite soon enough. You don’t think so? Ask a Hungarian, Czech, or German how the West treated them when they rebelled against The Russian Bear. The West’s pocketbook will dry up soon enough, after all, NATO and The West were too frightened to challenge Russia directly. They only threw their money and empty words at the aggressors, much like they did to Hitler long ago. Someone will declare “peace in our time” and so it will be until the Bear becomes hungry again.

Question: Is there anyone in Washington, Ottawa, London, and The E.U. Head Quarters in Brussels who is knowledgeable in World History? Why must history remain cyclical, always repeating itself over and over again? Build up Society, then tear it down, only to build it up again…so on and so on………