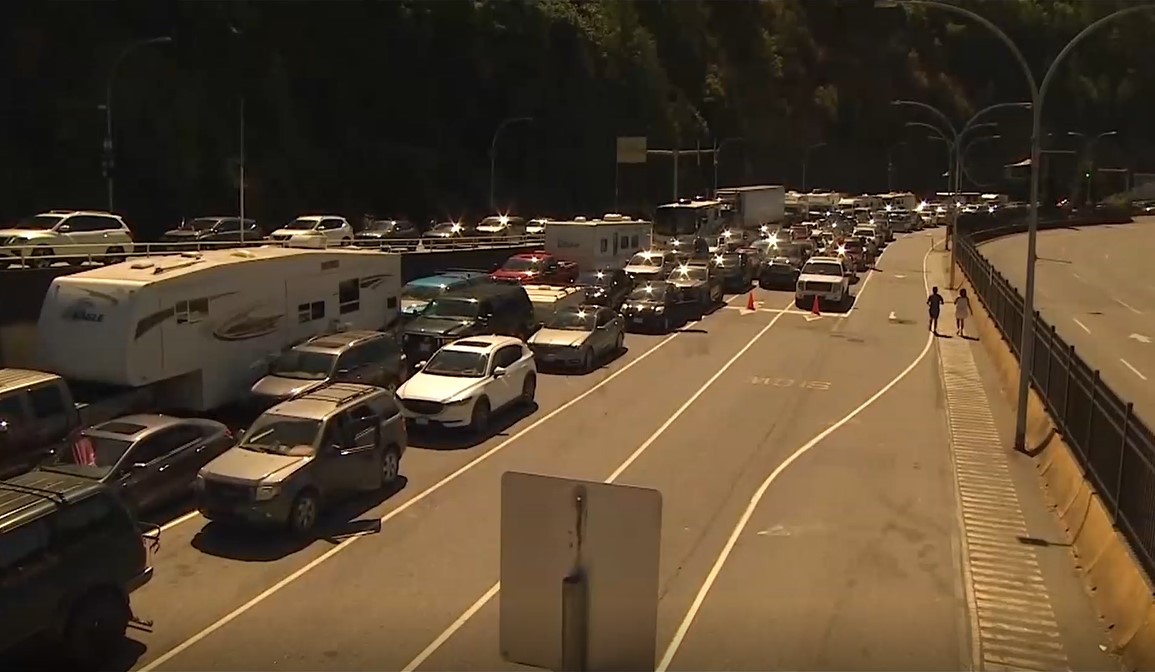 The crush of cars and campers trying to reach Vancouver Island Friday was so overwhelming this B.C. Day long weekend that police had to turn traffic away at Horseshoe Bay Friday, as packed vessels and extreme waits were in store for anyone getting in line without a reservation.

“I’ve come to the Island every year for years. This is insane,” said BC Ferries passenger Zaahira Lalai at the Horseshoe Bay terminal.

“It’s better than not getting on the boat at all. I was pretty paranoid we weren’t going to get on,” said passenger Tony Wong.

BC Day long weekend is traditionally the busiest weekend of summer for travel to the Island. According to officials, what’s added to it this year is pent-up demand from the recent easing of COVID-19 restrictions along with forest fires in the Interior making many resorts unavailable.

“We are moving customers as quickly as we can but this is the busiest weekend so we’re definitely at capacity,” said Deborah Marshall of BC Ferries.

The traffic has lead to packed hotels and campgrounds, but Allison Rees, Manager of Parksville’s Riverbend Resort, said many people have arrived without reservations and are finding themselves out of luck with nowhere to stay.

So the resort’s staff have parked people in available driveways and grassy roadsides because they have nowhere else to go.

Nancy Hales and Gord Tassie were given a patch of roadside to set up camp.

“This is a green space they call it. Very crazy and packed everywhere’s gonna be packed,” said camper Gord Tassie.

According to Tourism Vancouver Island, accommodations are busy across the Island — from Port Hardy to Victoria.

Tourists are expected to keep pouring onto Vancouver Island right through the end of summer and into the fall, as international COVID-19 restrictions ease. With growing talk of a fourth wave of COVID-19 sweeping Canada, Island businesses are taking advantage of the customers they have now, without any certainty of what’s ahead.

While Black Friday and Cyber Monday are known for incredible deals on technology and kitchen gadgets, it’s also the perfect time to stock up and save big on household items you use on a daily basis.

From toilet paper and cleaning products to batteries and toothbrushes, Amazon Canada has a slew of incredible deals starting at just $4 as part of their early Cyber Monday deals.

While the online retailer boasts massive savings on a variety of everyday essentials, which you can check out here, Yahoo Canada has selected the very best deals across home, personal care, cleaning, grocery and home office.

Black Friday is over, but the Cyber Weekend deals are still going strong! Click here for all the latest updates on early Cyber Monday deals, sales and discounts.

Read on to shop 30+ everyday deals from Amazon.

Black Friday is over, but you can already shop Amazon Canada’s Cyber Monday deals