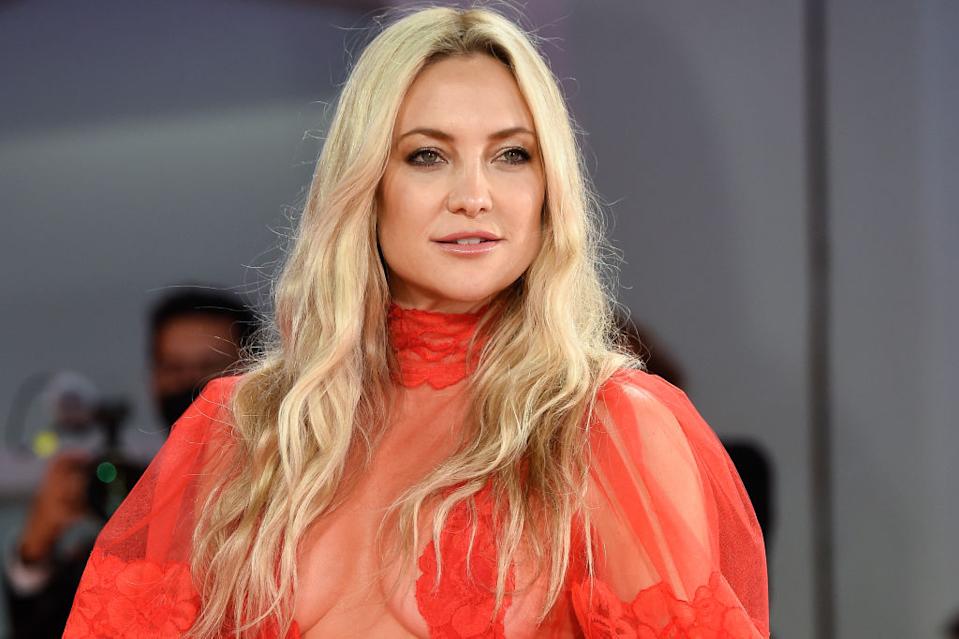 Kate Hudson is stripping down for a great cause.

The 42-year-old actress took to Instagram on Tuesday to share a photo in her underwear, advocating for Breast Cancer Awareness Month, leaving fans blown away by her “ripped” abs.

“It’s Breast Cancer Awareness Month and I’m stretching my quads before joining my friends at Kit Undergarments and Third Love as they kick it to cancer by donating 15% of sales from the Kits To Kick Cancer collection to Women’s Cancer Research Fund,” the mother-of-three wrote to her more than 14 million followers.

The Fabletics co-founder’s post was met with praise, not just for bringing attention to the worthy cause, but for her strong and toned figure.

“OK, I had no idea she was this ripped,” one person commented, while another added, “Definitely thought that was J.Lo at first glance.”

“I thought you were Jennifer Aniston at first,” someone else chimed in. “Can you imagine being a mom and 42 and looking this good? I am in shock.”

“Girl, you are in crazy good shape,”another commented. “I hope I look like this when I’m in my 40s.”

“The hair is irrelevant when you’re a mom with a body that looks this great,” someone else added.

“Thank you for promoting Breast Cancer Awareness Month and thank you for being this freaking hot,” another fan praised. “Keep up the hard work, sis. I see those abs!”

It’s no secret that the “How to Lose A Guy In 10 Days” star works hard for her body. In an interview with Women’s Health in June, Hudson revealed that she works out three or four times per week with a personal trainer.

“I know I’m at my strongest is when I’m doing my Pilates because it never gets easier,” she said. “The more you do Pilates the harder the things you can do become. I love how flexible I feel and I like what it does to the shape of my body.”

Aside from pilates, Hudson prefers to keep her exercises as fun as possible.

“I like to do any kind of dance workout,” she added. “I have the Peloton Tread, I just got it and I love Peloton. I think they make it so easy to have ‘no excuse’ workouts.”

Contracting COVID-19 may provide some immunity. But still get vaccinated, scientists say – CBC.ca

At least 2,000 COVID-19 vaccine appointments have been booked for young children between the ages of five and 11 in the region.

Lambton Medical Officer of Health Dr. Sudit Ranade said so far about 500 kids within the young age group have received their first shot of the paediatric Pfizer vaccine.

“There are appointments available at our Lambton College Event Centre location as well as the Rapids Family Health Team location, and those are bookable through our website getthevaccine.ca or by calling us at 226-254-8222.”

There are other community clinics where young children can get their shot, however, the options listed above are more kid-friendly.

“We’d prefer you to book there for now but over time we’re going to integrate that work with just general community clinics,” he said.

Ranade said the number of vaccine bookings for young children is going as expected based on a survey Lambton Public Health conducted in October.

“If we really look at the overall picture, we have just under 10,000 kids who are eligible in that group. We would expect, based on our survey, that 60 per cent of those parents wanted to get their kids vaccinated right away,” said Ranade. “So if we get up to the 5,000 to 6,000 mark then we’ll reach sort of what we expected.”

Although the province has opened vaccine bookings to children who are turning five by the end of this year, Ranade said his directive is to only allow those who are actually five years old to receive the vaccine.

“That’s not different from how we administer a lot of other vaccines, for example, the MMR vaccine is typically administered to children on or after their first birthday and there are some reasons around that,” said Ranade.

He also said although he understands the eagerness some parents may have to vaccinate their young ones against COVID-19, Health Canada’s approval is specific to those five to 11.

Meanwhile, the province’s GO VAXX bus stopped in Petrolia on Wednesday and administered 50 first doses to people, 40 of which went to those in the five to 11 age group. During the mobile clinic, 17 second doses were also administered and 107 people got their third dose.

Ranade said the health unit has received a lot of appointment bookings for booster shots and is “fully booked”. Lambton Public Health is currently in the process of seeing where capacity can be increased and where appointment slots can be opened.

The province announced Thursday aftternoon that third doses eligibility is expanding to include those 50 years of age and up. Individuals in that group will be able to start booking booster shot apponitemtns on December 13. Ranade said the rollout should still flow based of vaccination timelines.

“Many of the people in the 50 and 60 age group, because of when they received their second doses, would not actually be eligible to receive third doses,” he said. “They may be eligible to book but they won’t actually be able to get that dose until the middle of January.”

Ranade said if the health unit encounters a situation where a lot of people in the 70-80 age group waited until mid-January to book their appointment but are unable to find a slot, the health unit may need to take steps in order to make sure the vulnerable population receives their booster shot. The Manitoba government is advising people about a variant case of the flu virus that has been identified in the province.

Manitoba Agriculture and Resource Development said the variant H1N2 has been identified and reported to the Public Health Agency of Canada.

This specific variant is a virus that comes from pigs.

“Influenza viruses from pigs do not normally infect humans,” the province said in a news release. “However, sporadic human infections with influenza viruses that normally circulate in pigs have occurred. When this happens, these viruses are called ‘variant viruses.'”

The case was identified in October after the person wasn’t feeling and they were tested for COVID-19.

The province said the person’s symptoms were mild and their test came back negative for COVID.

The test was later identified as the variant influenza case as part of regular influenza surveillance.

“The individual had direct exposure to pigs. Based on available evidence, the current assessment is that there is no increased risk to people, with no evidence of human-to-human transmission at this time.”

The government added there also isn’t a risk to the food supply chain.

Officials are reassuring people that this isn’t a food-related illness and they cannot get the variant from pork meat or by eating pork.

“Health officials, in conjunction with Manitoba Agriculture and Resource Development, have performed a public health investigation to determine the source of the virus and have not identified any further spread.”

If people who work with pigs or poultry get tested for COVID-19, they are told to identify themselves as agricultural workers so officials can see if there are any more influenza cases.

Officials said this variant does no spread easily among humans and are considered rare but they also have tips for people to reduce the risk of spreading the virus.

People are told not to take food or drinks into pigs areas and they should put anything in their mouths while in pig areas, avoid contact with pigs that look ill, wash your hands before and after interacting with pigs, and avoid pigs if you have flu symptoms. Anyone who is a high risk to complications should avoid pigs and pig barns.

For information on this flu variant, people can visit the Government of Canada’s website.

British Columbia’s Ministry of Forests, Lands and Natural Resources is monitoring the province’s deer population for the presence of the virus that causes COVID-19, but says no wildlife cases have been detected so far.

Environment and Climate Change Canada announced Wednesday that the coronavirus had been detected in three white-tailed deer in Quebec last month, marking the first time the virus had been found in Canadian wildlife.

The B.C. government says it is collecting samples of deer harvested by hunters as part of its COVID-19 surveillance program.

“The detection of SARS-CoV-2 in hunter-harvested deer in the Estrie region of Quebec is the first detection of the virus in free-ranging wildlife in Canada,” the ministry said Thursday.

“COVID-19 remains largely a disease of human concern and typically spreads from human to human,” the ministry added. “There is no known transmission from deer to humans at this time.”

Environment and Climate Change Canada says the three deer found to be carrying the virus all appeared healthy and showed no signs of COVID-19 infection.

The discovery followed recent reports of the virus spreading among white-tailed deer in the United States.

Environment Canada says anyone exposed to respiratory tissues and fluids from deer should wear a well-fitting mask and avoid splashing fluids as much as possible.

COVID-19 has infected multiple species of animals, including dogs, cats, farmed mink and zoo animals, but this is the first time in Canada that it has spilled over into wildlife.